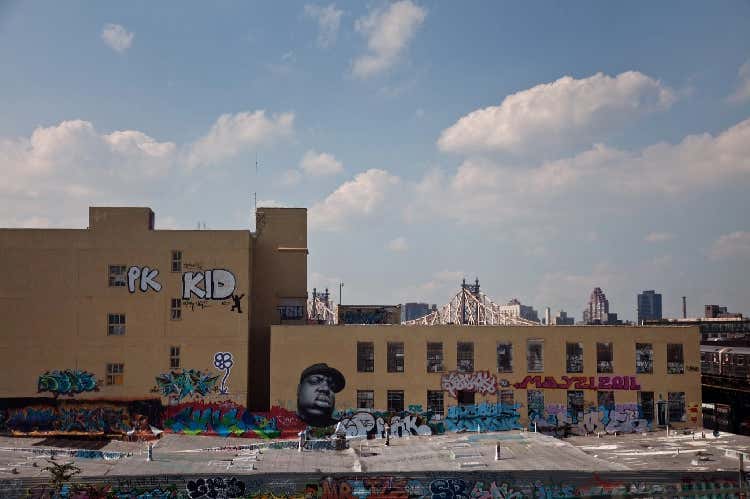 Source – Ruling that graffiti — a typically transient form of art — was of sufficient stature to be protected by the law, a federal judge in Brooklyn awarded a judgment of $6.7 million on Monday to 21 graffiti artists whose works were destroyed in 2013 at the 5Pointz complex in Long Island City, Queens.

In November, a landmark trial came to a close in Federal District Court in Brooklyn when a civil jury decided that Jerry Wolkoff, a real estate developer who owned 5Pointz, broke the law when he whitewashed dozens of swirling murals at the complex, obliterating what a lawyer for the artists had called “the world’s largest open-air aerosol museum.”

Though Mr. Wolkoff’s lawyers had argued that the buildings were his to treat as he pleased, the jury found he violated the Visual Artists Rights Act, or V.A.R.A., which has been used to protect public art of “recognized stature” created on someone’s else property.

Let’s review. Man buys property. Other 21 men come along and deface man’s property with paint. Man repaints his own property the way he likes it. Men sue man. Men win. Judgeman sides with them. Man has to pay vandals $320,000 a piece. Have I got this right? I’m not sure I’ve got this right.

I feel like there’s something missing here. Like this Jerry Wolkoff guy went into the MoMA with buckets of Sherwin-Williams and threw them all over the Jackson Pollocks. But nope. I went over the article five times and I read it right. It is exactly how I described it. Complete strangers trespassed on a property tax-payer’s land, vandalized his buildings, hired lawyers to argue that the block letters they painted on there not only makes them Van Gogh, it means the outside of this other guy’s building belongs. And he can’t do what he wants with it.

… the judge and defense lawyers wouldn’t be allowed to obliterate my priceless works at Maaco without paying me the price of a new house. Because I wouldn’t be a simple vandal. I’d be expressing myself artistically in “an open-air aerosol museum.”

Welcome to America, 2018. The fall of civilization is way ahead of schedule.