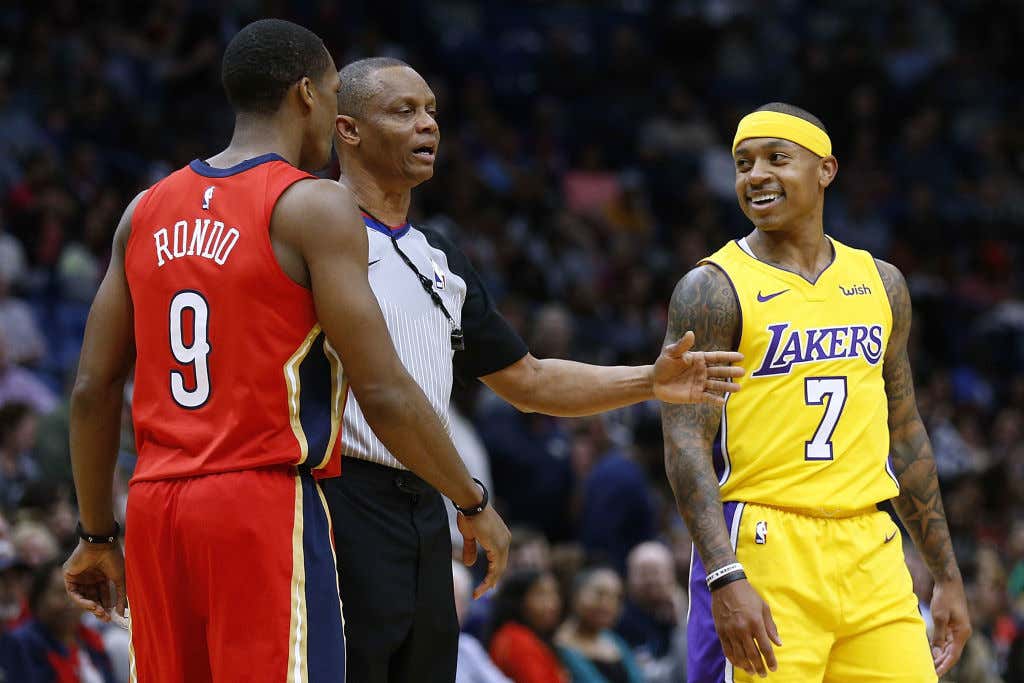 OK a few things right off the bat. That was the weakest ejection (on both sides) that I’ve ever seen. Guys can’t bump around and hold me back fight anymore? That’s exactly what the NBA thrives at! Also, as a company man I must say thank you to both of these fine gentlemen for getting the appetite wet for a good old brawl. Since they didn’t give it to you, make sure to get your fix by buying #RNR2 which you can do here. But anyways, back to the beef.

A little backstory for those who may not know. Back when the entire planet cared if Isaiah should get a 30 second tribute video on Paul Pierce night, Rondo, noted salty ass motherfucker, had this to say

So he’s not wrong, but I don’t want to spend time going through all that again. Well last night was the first time these two matched up since those comments, and you just knew that Isaiah remembered. That’s the kind of player he is, he holds on to that sort of stuff and it fuels him. Then once the drama started, Rondo went back to it

I’ll tell you why Rondo acted that way, because he’s a legit crazy person on the basketball court. It doesn’t matter who you are, Rajon Rondo does not back down at any moment. Do we forget this?

It’s why myself and many other Celtics fans love Rondo to death and always will. Guy has no fear and will talk/shove with the best of them.

But that brings me to my overall point. As a lifelong Celtics fan, this beef makes me sad. Really sad. Long before there was a Team Isaiah, there was Team Rondo. To this day I consider Rondo the best pure point guard I’ve ever seen suit up for the Celtics while I’ve been alive. It’s hard to find a more pro Rajon Rondo guy out there besides me and Janos. It’s also pretty well known that I am a big Isaiah guy as well. I’ll forever be grateful for the way he sped up this rebuild, helped attract all star talent, and really revived the Celtics after they were pretty much dead post Big 3 trade. I don’t want these two to be fighting or hate each other, I don’t want that at all. Both have brought me so much joy you just hate to see it.

Now who would win? Man I dunno. Rondo has the size but a feisty Isaiah is no joke. You don’t make it to the NBA and have his sort of success without being a tough dude. They both weigh the same, Rondo at 186 and Isaiah 185, and despite his height Isaiah does have a pretty good wingspan. I think it would be close. I think the fight would go the distance if we’re being honest. This whole thing makes me uncomfortable, because of my deep and forever love for both. Here’s what we know, this beef will probably last the rest of their careers. You think Rondo forgives and forgets? The man still hates Ray Allen with a passion and it’s been 6 years.

So in a situation like this, there is no winner. I just want my two favorite point guards of my lifetime to get along and not hate each other. Watching them both play for other teams is hard enough.