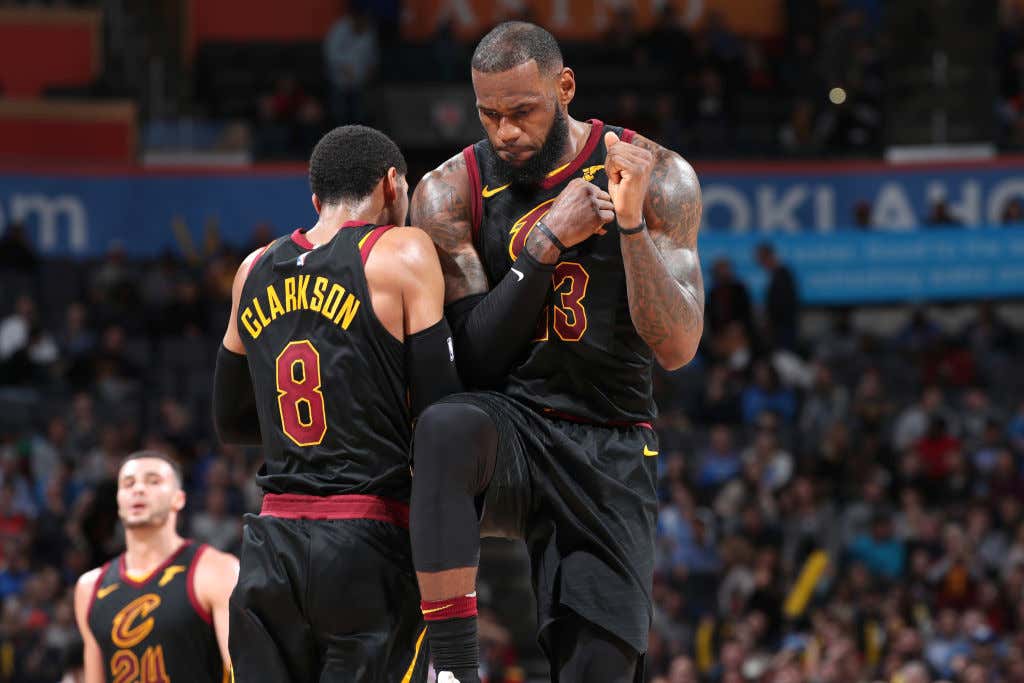 Happy Wednesday everybody and welcome to another edition of Last Night In The NBA where we catch you up on everything that went down from the night before in the Association. Despite there being just 6 games on the schedule, it was not a night that lacked drama. Outside of just one all of these games were relatively close, and we’re starting to see teams round into shape in preparation for the second half. If for whatever reason you couldn’t watch, well grab a chair and get comfortable because here’s what happened.

These fucking Raptors just won’t stop winning. Now 24-4 at home, they have a full game lead on the Celtics and a 6 game lead on the Cavs for the top spot in the East. They’ve currently won 6 in a row which is the longest current streak in the East, and 8 of their last 9.

The secured their 40th win because as many teams do, the Heat had problems stopping the Raptors’ two best players

27 points is pretty impressive, so were the 19 points that DeRozan scored in the 3rd quarter alone. Lowry had 22 of his own on 8-17 shooting, and you know things are going your way when shit like this goes in

but the thing with TOR is their success is not solely because of these two all star talents. Once again, the TOR bench was solid as hell, finishing with 40 points. That’s a pretty legit forumla…get around 50+ from your two studs, know you have 40-50 coming from your bench, and let Ibaka and the rest of the starters do whatever. Aside from the record, the Raptors also have the 3rd best point differential in the entire league, so they’re getting it done on both ends. Their home record is the best in the league, so yeah if you’re the Celtics, I’d say snagging the #1 seed is pretty important.

For MIA, a tough loss for a team holding on for dear life to that 8th spot in the East. Wade had a pretty productive night, with 10/11/6

and give Dragic credit, he went blow for blow with DeRozan in that third quarter

And if you’d believe it, the MIA bench actually was the best unit of the night for both sides. They finished with 52 points on 19-37 shooting. The bad news is the Heat are now 3-7 over their last 10, but it’s not time to panic just yet. The Pistons have also gone on a brutal stretch so MIA still owns a 2.5 game lead for that final spot.

If you look at the standings in the East you’ll see that seeds 3-7 are all either on a winning streak, or just won a game. So for MIL, who is looking for separation from WSH/IND and has dreams of catching CLE, they needed to win this cupcake game and to be  honest it was a little closer than I expected due to a poor fourth quarter from the Bucks. But, they pulled it out and had fun doing it

I want to give some love to Khris Middleton because I feel like when you talk MIL, it’s all about Giannis this and Giannis that because he’s a fucking beast. But at the same time, Middleton is having a great season as the secondary scoring option for MIL. Who wouldn’t take 20/4/5 on 46% shooting. His three point shooting is a little suspect percentage wise, but he’s making 1.8 per night which is pretty good. And to think, he’s making just 14M this year, next year is at 13M, and then last a player option for 13M in 2019-20. I think at the time 5/70M looked crazy when he got it, but he’s been great for them.

For ATL, what, did you think you could win on the road with 38/34% splits? Another classic have Schroder be your leading scorer but then everyone else shoot like dicks and ultimately lose. ATL has named this strategy. Their bench was nonexistent, going 5-20 and for some unknown reason John Collins still isn’t starting for this team. Will someone explain that to me? Do they think he’ll help them win games or something? Why not give your best young player all the burn he can handle? Whatever, you stink ATL.

Speaking of teams that just keep on winning, hello Rockets, winners of 9 straight.

The performance the Rockets turned in last night, against a really good MIN team, on the road, was simply ridiculous. How do you beat 49/46% splits, with 22 made threes, 29 FTA, and just 6 TOs? Read those numbers again. It’s even crazier when you realize they scored just 23 points in the first quarter. Harden was stupid, with his 34/6/13 on 50/60% splits while making 6 threes, Ryan Anderson coming off the bench to drop 21 and made 6 threes, they did all this with their third best scorer in Eric Gordon go 3-10. This isn’t the first time this has happened during the streak either!

Gordon is in the middle of a tough stretch where he is 9-30 over his last three games and it doesn’t even matter. I cannot imagine this team choking in the playoffs, and sitting just 0.5 games behind GS, this is going to be one of the more fun battles the rest of the year. I really think HOU’s best shot to get past GS if they were to ever meet would be if they had homecourt where they’re 22-6 at the moment. You may not want to accept this, but HOU actually has a better point differential than GS AND plays better defense, giving up nearly 2 fewer points a night. This isn’t the same old Rockets teams of the past, and I think they’re proving that to us.

For MIN, you thought maybe something could happen after that opening 12 minutes, but then it was nothing more than a slow methodical death. MIN is now 4-6 in their last 10, but the good news is all the team around them are losing as well, so they are still right there looking up at SA with just a 0.5 game difference for a top 3 seed. The other good news is that KAT was finally involved, and he responded with a modest 35/12 on 12-16 shooting

but for MIN to be able to beat these elite teams in the West, they need all their guys to show up. Safe to say Wiggins (2-14) and Butler (5-13) were a big reason why in both the second and fourth quarters the TWolves couldn’t get it done. I suppose it also doesn’t help to give up 42 points in the fourth, and this is sort of a wakeup call for them. They’ve now been rocked by both GS and HOU recently, and it just goes to show how much further they have to go to be real competitors in the West.

This is normal though, it’s how rebuilds happen. They should still win a round, who knows maybe two, and it’s all about the development of their young pieces with playoff experience. They may just not be ready to run with the big boys yet.

Woah baby watch out! New look Cavs coming through! Winners of 4 straight and 2 with the new guys, CLE is feeling themselves after this win, as they should. You handle BOS and OKC back to back on the road like this and you deserve all the praise you want. How did the new guys look? Not bad!

and of course, when Lebron is happy, you can tell by the way he plays

A lot of the talk with this suddenly saved CLE team will be about how their new guys are making all the difference. They certainly help, but let’s not ignore the truth

The reason CLE looks different is because Lebron cares again, and is being used more than he ever had at any point this season. This makes sense, the new guys aren’t totally comfortable yet, but to me it’s not so much the play of the other guys that has impacted CLE’s success, but what it has done to Lebron. Now, a 39% usage rate is utter insanity, so maybe the Cavs are just being setup for a tired Spring, but this is Lebron and he’s a machine so I doubt it.

We’ve seen this honeymoon phase before, I mean just look at what happened in DET right after their trade, and then look at them recently. Nobody knows which Cavs are the real Cavs because this team has played just 2 games together. I think we can all agree they are better right now, but they still gave up 112 points and something tells me in the playoffs where defenses tighten up, they won’t have a run of four straight 120 point nights.

Also not to be ignored as one of the reasons for their recent success, JR remembered how to shoot

For OKC, like their division parter MIN, they’re 4-6 over their last 10, and this game was close up until the fourth where Rodney Hood made some plays, Nance Jr made some plays, and it was curtains. It’s pretty rare that 4 of your 5 starters can have at least 21 points and you still come up empty

For a team that prides itself on defense (4th fewest opp points in West), they did not give up a quarter in which CLE scored under 29 points. That’s a big reason why they’ve lost 6 of their last 8 after winning 8 in a row. Fortunately they get to rebound against dogshit MEM today to help them forget this game ever happened.

If you ever can’t sleep, go and check if the Nuggets are playing and give them a watch because they are fun as hell, especially at home where they are now 23-7. You have Jokic doing his thing dropping a triple double with 23/13/11 on 8-15

and you add that to great young talent like Jamal Murray and Gary Harris who both played well, and these are real pieces. How high can DEN get? (pun not intended but intended) Well, they’re 7-3 over their last 10, which means they are currently sitting in the 6 spot, but are just 3 games behind SA for the 3rd. They’re also one bad losing streak from being out of the playoffs entirely. That is some spectrum.

Remember though, they’re doing all this without Paul Millsap, who isn’t coming back until March, and he’s a pretty good player so things should only get better over the course of the second half.

For SA, look you want to believe in them given their track record, but now losers of 3 straight, Kawhi nowhere in sight, for the time being you can’t put them in the same tier as GS/HOU. Like it’s no longer those three teams and then everyone else. They are now part of the everyone else. They’ve really struggled against teams over .500 this year to the tune of a 12-19 record.

But at least Lauvergne had a career night!

Here’s something that’s also crazy. Look at the goddamn Northwest Division right now, with all these teams fighting for playoff positioning

Going to be a crazy finish.

By rule, someone had to win this game and that would be the shitty but less shitty Kings. Helps when ZBo turns back the clock for a nice 22/7/3 on 10-15 and even makes a couple threes

For DAL, at least you kept it close and had a big 4th quarter, the problem was scoring just 16 points in the opening quarter. Try and avoid that when possible if you’re interesting in winning an NBA game. The good news is DAL isn’t interested in that so it doesn’t really matter. You can just sit back and watch JJ Barea dominate and not care about the score

Also, shouts to former Celtics legend Dwight Powell for turning himself into an actual player. He’s not bad!

And that’s it! You’re now all caught up on everything that happened last night in the NBA. We’re back tonight with 12 total games including some great matchups like BOS/LAC, MIA/PHI, TOR/CHI, LAL/NO and for the degenerates out there PHX/UTA and GS/POR late night. As always, if you can’t watch all 12 that’s OK, come back tomorrow and I’ll bring you up to speed.