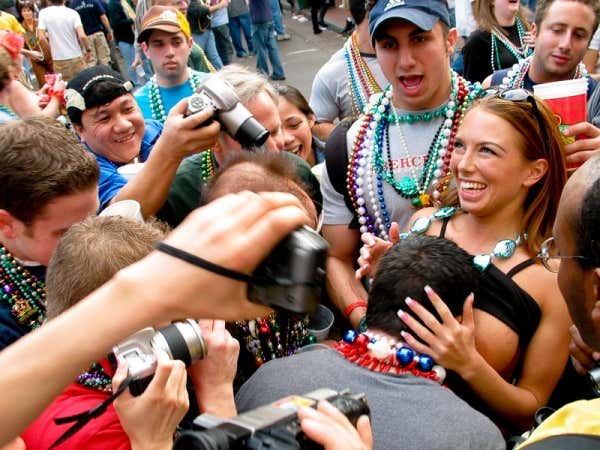 Everyone knows that I was training to be a preacher when I was younger. As such, I stayed away from the tits. Now, dont get me wrong. I like them. Love tits. In fact, one time my mother found a stack of Victoria Secret catalogs under my bed. Fellas, I wasnt shopping for bras; I was jerkin off. I was just a young person exploring my body. Nothing wrong with that. Despite the rumors, no kittens died as a result of my self-pleasure.

I grew up on the panhandle of Florida and went to high school in Pensacola. Because I didn’t see any real-life tits and the internet was still in its infancy, Mardi Gras was my time to shine. I was catching beads and looking for a rogue nipple. Oh how exciting that would have been to see a nipple in the wild. Can you imagine the thrill? One minute you’ve never seen a real adult lady nipple in your life and the next minute you have a neck full of beads and you’ve seen two nipples. Incredible. Quarter sized. Maybe nickel sized? I dunno. The difference really is negligible so there’s no reason to argue about it. Coin-sized nipple. There. Some common ground.

As I’ve gotten older, I’ve seen twitter videos and Instagram videos of women running about with their tits flying in the wind at Mardi Gras parade. Because of that, I realized why I never saw tits at Margi Gras when I was younger. It’s because we always held a parade in the church parking lot with the other Church members. Nobody wanted to be judged by Brother Ted’s pious ass so they kept their tits in their choir robes. Completely ruined it for the rest of us. Brother Ted wasn’t all bad, though. He plugged my nose when I got baptized. There’s nothing worse than getting water up your nose so I thank him for that. Miss you, Brother Ted.

Closing note: I’ve seen tits in person now. They are worth the hype. Head on out to Mardi Gras in Mamou, Lousinanna. You’ll see some there.