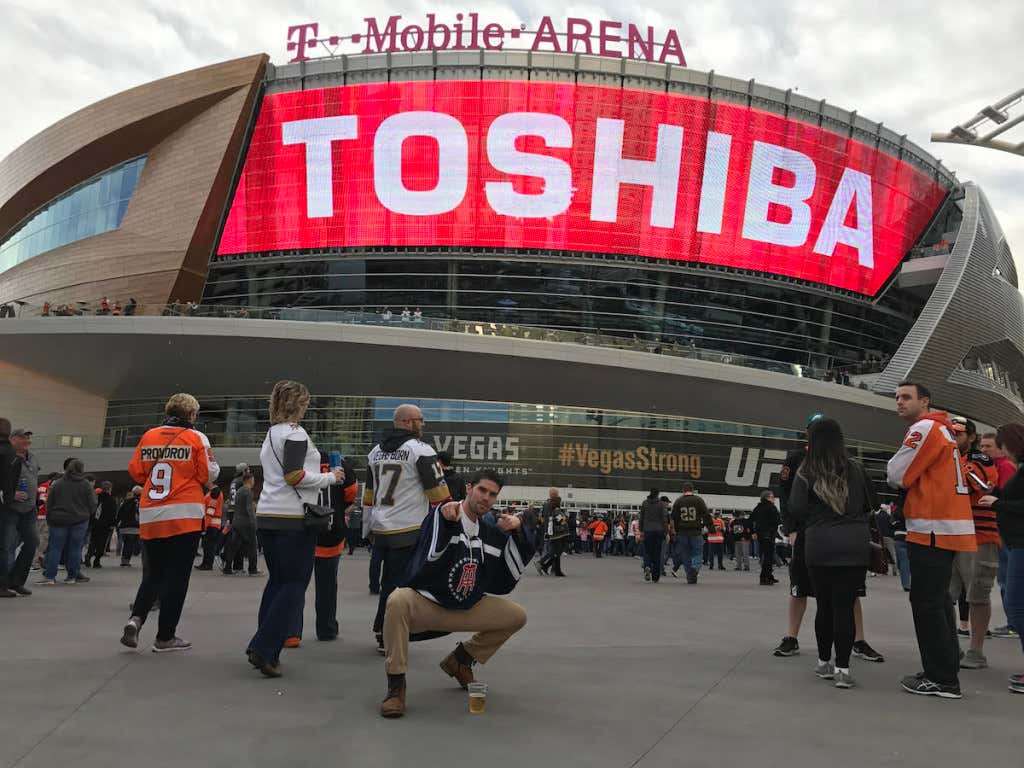 Now when it was announced close to 2 years ago at this point that Vegas was going to get an NHL team, a ton of people laughed at how ridiculous it is to put hockey in the desert. Which is understandable since there are plenty of other available markets out there that are actual hockey cities. But you show up to one game in Vegas and you know this was the perfect move by the NHL. I haven’t been to many away games before but the atmosphere outside of the stadium before a game in Vegas has to be the best in the league. Obviously that has to do with the fact that you’re in Vegas, but just the set up surrounding the arena is great. A ton of bars, a ton of people, a ton of music, pretty easy to just roam around from spot to spot with a beer in your hands. It’s a good time. 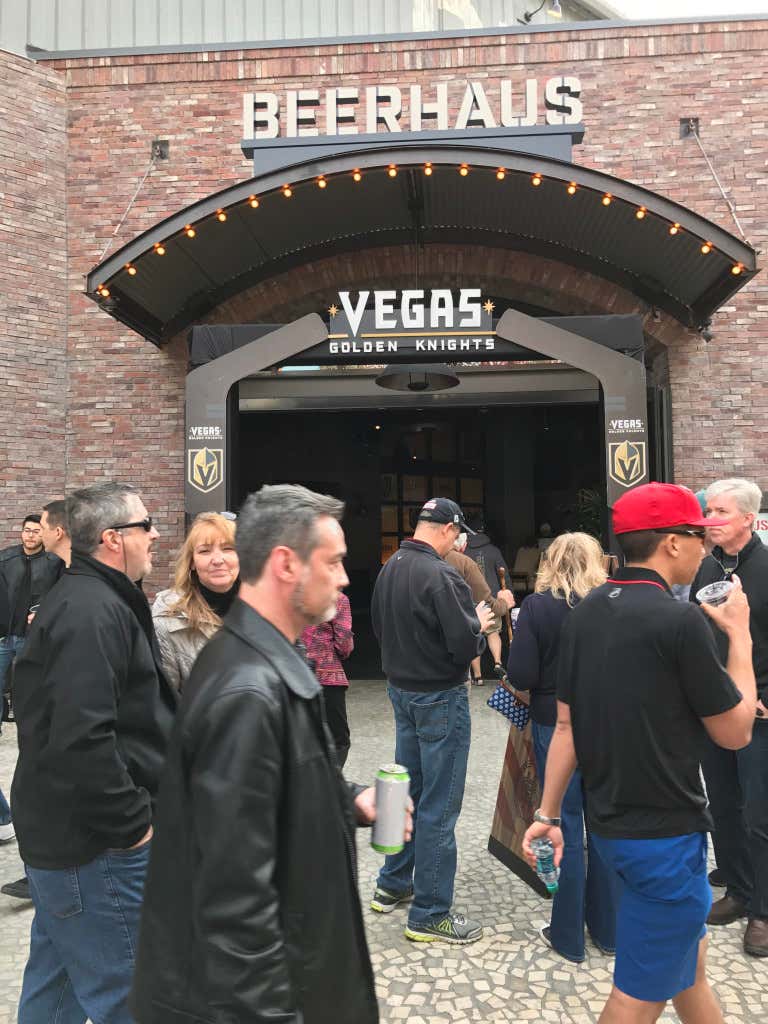 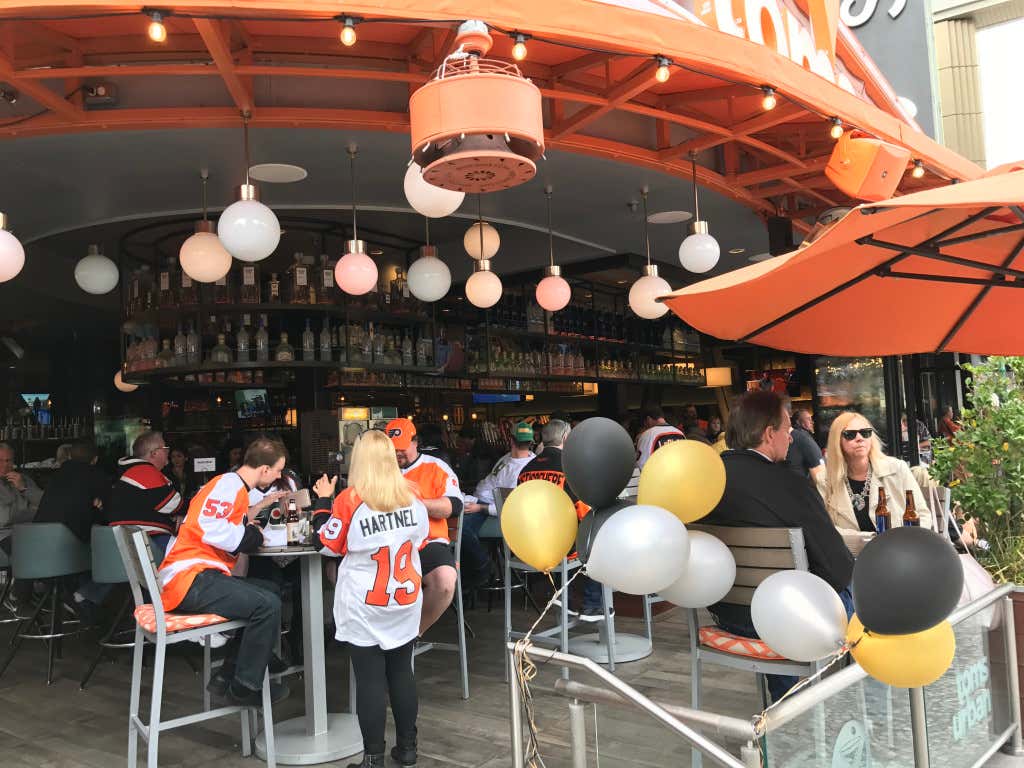 (Might have locked up Rambo as a guest on The Crease Dive for all you lacrosse guys out there. Guess that means I can write this trip off as a business expense).

But yeah. It’s a good time all around. And the best part about it is that I’m assuming most games are at least a 50/50 split between Golden Knights fans and the away team’s fans. So as long as you’re not a bozo walking into a Golden Knights vs Flyers game wearing a Rangers jersey, you’re going to have a squad to get after it with before the game. I’ll admit there were a lot more VGK fans there than I was anticipating, however…. well in the end, Vegas was not ready for the takeover that Philly just put on their city.

Things were pretty civil for a while. There was a constant flow of “Let’s Go Flyers” chants and “E-A-G-L-E-S EAGLES” chants, but they were often immediately met with a “Go Knights Go” chant to try to drown us out. But here’s the thing. That may have worked against Philly fans last year. That may have worked against Philly fans 2 months ago. But Philly fans who just watched their team win a Super Bowl for the first time ever and combined with the fact that neither the Flyers nor the Sixers have lost since the Super Bowl either? That is a fanbase who has been shackled for years and the chains have finally been broken. And let me tell you this right now. Vegas was not ready for an unchained Philly, especially not after the Flyers sealed up the win with 3 minutes to go. Got that Vegas Flu vaccination, boi.

Like I said. I’m sure the majority of games here in Vegas are pretty evenly split between Golden Knights fans and the away team’s fans. But this wasn’t evenly split. Vegas was conquered and will officially be referred to as West Philly from here on out. That’s only their 4th regulation loss at home on the season. These Golden Knights fans have been spoiled. They’ve been in existence for 1 year and they’re 19-4 at home. They get to show up to basically every home game and watch their team win. Golden Knights games are like a party here in Vegas. But the savages of Philadelphia invaded this weekend and pissed all over their party. Threw some snowballs and batteries at it, too. In the end, you can just count this one as a road loss for the Golden Knights. They thought we were going to be friendly and gracious guests? Wrong. That arena belongs to us now.

P.S. – In game experience at the games in Vegas are also pretty great. I’m sure the Flyers winning had something to do with that. But there’s a ton of energy in the building, they’re pretty good at pandering to the away team crowd with some of the videos up on the jumbotron, prices for food/beer aren’t much more than what you’re used to paying for at games anyway. Overall, 10/10 would recommend hitting up Vegas for a hockey game.