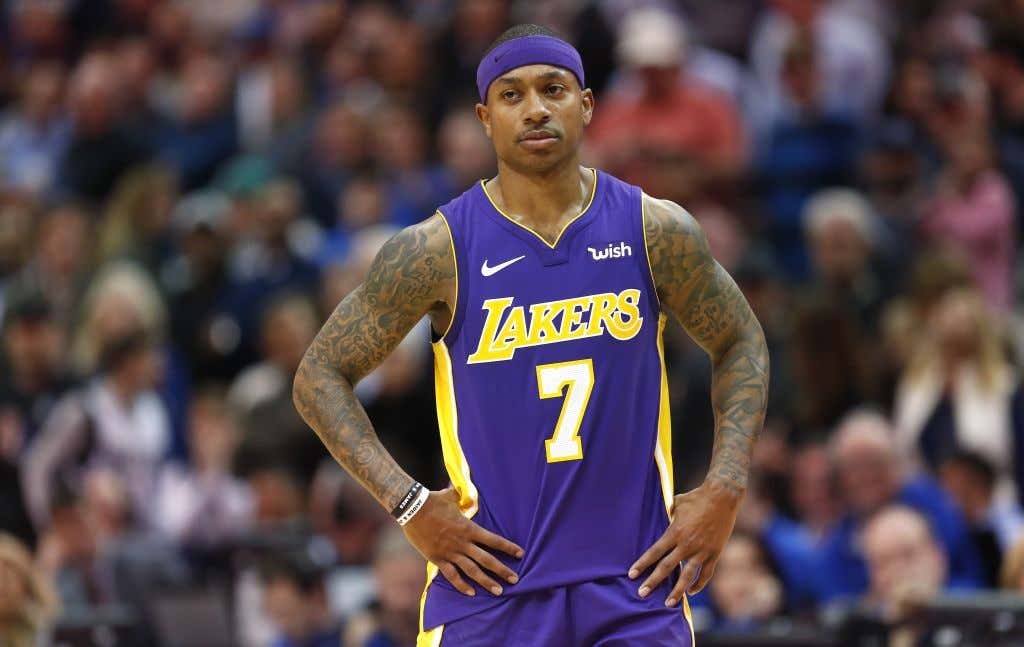 Happy Sunday everybody and welcome to another edition of Last Night In The NBA where we catch you up on everything that happened from the night before in the Association. Now that we finally have a Sunday without football, you’re probably looking to fill a void in your life. Well something I’ve found helpful with that is to focus on some random mid February NBA basketball games. It works trust me. We had a total of 7 games last night so there’s a lot to choose from, if you missed any of it, here’s what happened.

Congrats on the Pelicans for snagging just their second win since Boogie went down. Boy did they need it, with their current playoffs dreams sliding with each passing day. They’re holding on for dear life of that 8 spot, with a 0.5 game lead over the Clippers and 2 games ahead of UTA.

Hell, even new Pelican who’s filling in for Boogie went off for 21/16 with 5 blocks

We haven’t even talked about how Jrue Holiday also had 22/7/5 and that the team shot 49% and turned it over just 15 times despite the extra time. Yes, it was against BKN, but if you’re a Pelicans fan am I to believe you give a shit? You need all the wins you can get.

For BKN, this was the 5th loss in a row, and their 9th in 10 games. They are dropping and they are dropping quick. Currently slated for the 6th pick in the draft, they’re only 1 loss behind the league lead. Not great given how they were playing just a little while ago.

But it’s not all bad news! D’Angelo Russell is playing again, and is starting to look like his old self

and hey, there is nothing to be ashamed about when it comes to taking a 28 point deficit and forcing double overtime. That’s impressive.

Hard to beat MIL when they shoot 52.4% and get pretty solid performances from every starter not named Tony Snell. As you can expect, Giannis got it started with his 32/5/5 on 14-24

and Bledsoe did this thing with 18/8

For ORL, I say this with no sarcasm at all, Mario Hezonja is playing fantastic basketball over the last few weeks. He had another strong offensive showing in this game with 23 to lead all Magic players, and I don’t know what’s gotten into him, but it’s a complete 180

Other than that everyone else on the Magic stinks, that’s not news, but credit to Hezonja for actually making himself into something of value.

Is something brewing in Philly? Did the Super Bowl win open up the floodgates for sports success? Too early to tell, but I’m going to go out on a limb and say the Sixers being three games over .500 is their best mark of the year right? If not, very close to it. The reality is that since Christmas the Sixers have been pretty nails and things are going so well Fultz even started taking shots outside of the restricted area. Everything is coming up Philly!

Honestly though, it’s because Simmons/Embiid & company are playing great basketball on both ends

If they can keep defending like they have been, continue to take care of the ball and get full health from their main guys, they should absolutely hold onto that 8 spot in the East. In fact, their 3 game streak is the second longest active streak in the East. They’s moved to 1.5 games ahead of DET for the 8th, and if this keeps going and the teams ahead of them all decide to just lose all their games, we could see them move up for sure.

For LAC, as they make their own push to get into the playoffs, it has to feel nice to have Gallo back and not only that, but he actually looks like Gallo pre injury

To no one’s surprise Lou Williams is still getting buckets, leading the bench with 23/4/6 on 9-21

And on a serious note, is Tobias Harris the wing this team was always missing? Sucks they had to trade their franchise player in order to get that wing, but at least he’s playing well

Throw in a 10/21 from DeAndre and you’d think the Clippers had the talent to pass an injured and struggling Pelicans team, but then they can’t beat the Sixers so who the hell knows. It’s weird they only half blew up their team at the deadline, because if you’re going for it this year, you’d think Blake could help.

And just like that, the Wizards are back to being better without John Wall! Who cares that Beal went 3-13, Gortat 3-8, Oubre Jr 3-14, did you see how insane Tomas Satoranksy was?!?!

What a night for Tomas, but on one of the best nights of his career, this also happens

You could say the Wizards were a bit fortunate to win this game given how their stars struggled and the fact that they only scored 19 points in the fourth quarter. I suppose playing the the shorthanded Bulls helps.

For CHI, playing without LaVine who was resting as part of his return from ACL surgery, things were actually pretty balanced. They had 7 players in double figures, and sure none of them scored more than 15 points but that’s not so bad. Baby Dirk with 12/10, Valentine with 10/10/5 in the spot start, I have no problems this morning if I’m a Bulls fan

Crazy that we got Dirk’s best game of the season last night, and we’re so far into the year. He finished with 22 points on 8-11

He was a big part of why the Mavs were able to storm back and win the game late, same goes for Harrison Barnes who had 21/6 on 6-9 shooting. Dougie McBuckets made his Mavs debut and had 8 points in his 21 minutes, and outn of nowhere Dwight Powell drops 19/7 off the bench

But for me, the play of the night came from Max Kleber

That kids, is a poster.

For LAL, the biggest story was the debut of Isaiah. And would you believe, he got out of CLE and had the best game of his season? Best FG%, most 3PM, and a final line of 22/6 on 7-12 shooting in 31 minutes

Yes it is really really fucking weird to see him in a Lakers uniform, but this also looked as close as he’s been all year to the scorer we saw last year. Pretty wild Luke Walton figured out how to get the best out of Isaiah in like an afternoon and TLue still has no clue.

Now there is a downside, and Lakers fans will have to get used to this. Your defense is going to take a hit. See giving up 130 points to the Dallas Mavericks. Don’t expect Isaiah to help that, in fact he’ll probably make it worse. The good news is if you’re going to be getting close to BOS offensive production, it’s worth it.

Not to be forgotten, some other Lakers player well too

It will be very interesting to see how this all plays out over the last few months of the season.

Classic Warriors to let the Spurs hang around in the first half, feel confident, then come out in the third and murder their hopes and dreams and walk to a 17 point win. I respect their consistency in doing this to teams. This all happened with Durant and Curry combining for just 27 points, which just goes to show how fucking unstoppable this team is.

Good luck beating this team when they have 56/44% splits and make 10+ threes. No chance.

For SA, give them credit for staying close early given who they were missing, and Kyle Anderson did a great job filling in with 20/6/4 on 9-13 shooting

But guys, this is GS. You can’t drop 18 in the second and then 20 in the third and think that’s going to be enough firepower. Going 5-27 from deep felt very unSpurs like, and they’ve been just 5-5 over their last 10, giving hope to MIN that they’ll still be able to catch them for the 3 seed.

I don’t care if it was against PHX, I love watching this Nuggets offense. So many dudes that can kill you

and this doesn’t even include Murray/Harris who were pretty quiet and combined for just 25 points. If the Nuggets get hot offensively, they are going to be somewhat of a thorn in the side of a higher seed this playoffs. They can flat out score.

For PHX, it was a night of debuts for them as well, as Elfrid Payton made his Suns debut and looked good with 19/6/9 on 8-13

Much like Isaiah, maybe he just needed a change of scenery. If you’re a Suns fan you’re probably pretty happy because in addition to your new piece looking good, so did your young high lottery talent

All this coming with no Booker in the lineup, could the Suns actually be pretty good in a couple years? At the very worst at least they are an acceptable League Pass team.

And that’s it! You’re now all caught up with everything that happened last night in the NBA. We have a big Sunday ahead of us with CLE/BOS, TOR/CHA, and UTA/POR just to name a few, and as always if you miss anything just check back Monday morning I’ll fill you in.