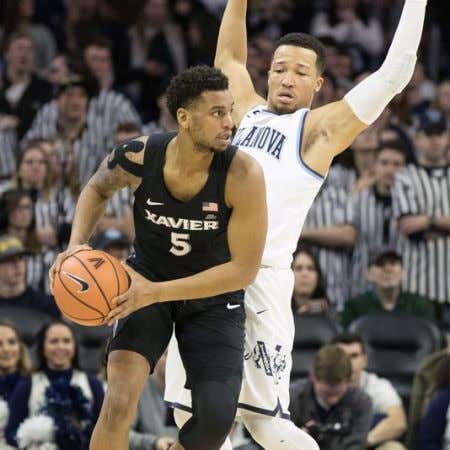 So the top-16 reveal is Sunday and yes I’ll be recapping that when it comes out. That said, there’s still plenty that can happen since tomorrow’s slate is loaded, we’ll go with the following for my predictions:

There’s a very good chance this happens. Right now both teams have 2 losses in the conference with Xavier playing one more game. The way the schedule breaks though helps out Xavier more than Nova. Xavier gets Nova, Seton Hall and Providence at home while having to go to Creighton, DePaul and Georgetown. That could very easily be a 5-1 or 4-2 end to the season, giving them a record of 14-4. Nova has DePaul, Butler and Georgetown at home while having to go to Xavier, Creighton, Providence and Seton Hall. They end with the toughest part of their schedule having 4 of the 5 best teams in the conference on the road. That’s not a recipe for success as you’re battling injuries and getting guys back from injury and working them into the rotation. This feels like it will end with both teams at 14-4 because Nova is Nova and they always seem to find a way to get those wins. But, it shouldn’t surprise anyone to see Xavier win the Big East regular season – the road wins at Seton Hall, Butler and Marquette are really holding weight here.

Arizona can’t defend, especially when it runs the two big lineup. I know our good buddy Sam Vecenie ran the numbers and the lineup with Ayton and Ristic is statistically the best one Arizona can put on the floor, but it still just looks lost defensively. This team should be centered around Ayton in the post, surrounding him with four guards/wings. The problem though is where’s the development of the other guys? To me the disappointing year falls more on guys like Ira Lee, Brandon Randolph, Dylan Smith, Keanu Pinder and Emmanuel Akot. Two of those guys had to step up and be better than they are. If that were to happen it would let Sean Miller play 4-out, 1-in more often. As for firing Sean Miller? Come on. That’s just dumb. You can knock him for ‘not achieving anything’ but it’s also horrendous to judge people strictly on the NCAA Tournament. This is his ninth season at Arizona and he’s made the Elite Eight three times and Sweet 16 two more times. He took a program that was in a bit of mess and made them arguably the best program in the west (I’d be willing to listen to Gonzaga during this run too). We’ve seen big time coaches go through stretches of not making a Final Four because it’s really damn hard to do so. Roy Williams went six years without one. K has had a five year stretch without a trip. Boeheim went 9 years without  a trip to the Final Four. The other thing is if you’re going to replace Sean Miller, who are you getting that’s better? There aren’t many overall coaches (factor in recruiting and all the other stuff) that would leave their current jobs for Arizona. That’s the bad thing about the NCAA Tournament. It’s ultimately a one-game scenario in which the best team doesn’t win. Not to mention he’s had a little bit of bad luck with the Brandon Ashley foot injury.

I’m not exactly sure what you mean by pull it together if I’m being honest. West Virginia dominated Kansas State and won at Oklahoma in its last two games. They currently sit 15th in KenPom with a 7-4 record in the Big 12 and a win over Virginia this year. The Big 12 is just incredibly deep this year where teams are going to suffer losing streaks. It’s going to happen to pretty much everyone in the conference and West Virginia suffered theirs. That said, look at the losses. There’s maybe one bad loss there at that came at Iowa State – not exactly the easiest place to play in the world. Now, there are problems with West Virginia – most notably in the halfcourt. They still struggle if teams attack their press and then slow the game down in the form of not having live-ball turnovers. West Virginia is still trying to figure itself out and roles players should have with the return of Esa Ahmad.

We know what Bill Self will do, right? He’s only going to play guys that he’s comfortable with out there. Right now he’s not comfortable with De Sousa, but I do expect a couple more minutes at some point. Self is getting pissed off with the toughness, defense and rebounding with this team, which are all things De Sousa can do out there. I don’t think you’ll see him play more than 10 minutes. Right now, Kansas is in a weird spot. When everyone is playing at their best, the best lineup is Graham-Newman-Vick-Svi-Azubuike. But, you have to have Garrett in there for defense. You have to play Lightfoot for rim protection and rebounding. I’m not quite sure if we’ll ever see this Kansas team at its best based on that.

Man, all these programs are definitely going in the right direction this year. It’s hard to pick which fan base should be the most optimistic, but I’d probably say Ohio State. Chris Holtmann already has a pretty loaded recruiting class coming i next year and I think he’s the best coach out of the group. He’s always going to get the most out of his guys just like he did at Butler. Plus, the Big 10 – he can really be the second best program there consistently behind Michigan State. In order I’d go: Ohio State – LSU – NC State – Butler – Georgetown -Missouri.

Way more concerned with Duke than I was impressed with UNC. Don’t get me wrong, UNC played well and shot the hell out of the ball – but my thought process on them hasn’t changed since before the preseason. They aren’t a title contender and are somewhere in the top-20-30 teams in America. Duke on the other hand. Everyone talks about its defense and rightfully so because it’s so bad, but my takeaway was just how dumb they were. They get lost on simple flare screens defensively. Offensively they started the second half with a Trevon Duval pull up from 18 feet, a wrap around bounce pass that had 0 chance of being completed, a forced stepback by Trent. It’s bad. They even cut it to three and instead of getting the ball to Bagley they went two possessions shooting threes, on a combined one pass. It’s now February 9th and this team still has 0 clue how to play with each other. It’s an absolute mess right now.

Pretty much just put me where the offense would run through me the most and I’d have the ball in my hands the most. Kentucky gets the point because Cal runs the dribble-drive and sets a lot of high ball screens. The wings are the obvious choices. Then in the post give me St. Mary’s so I can just set a million ball screens and roll to the hoop.