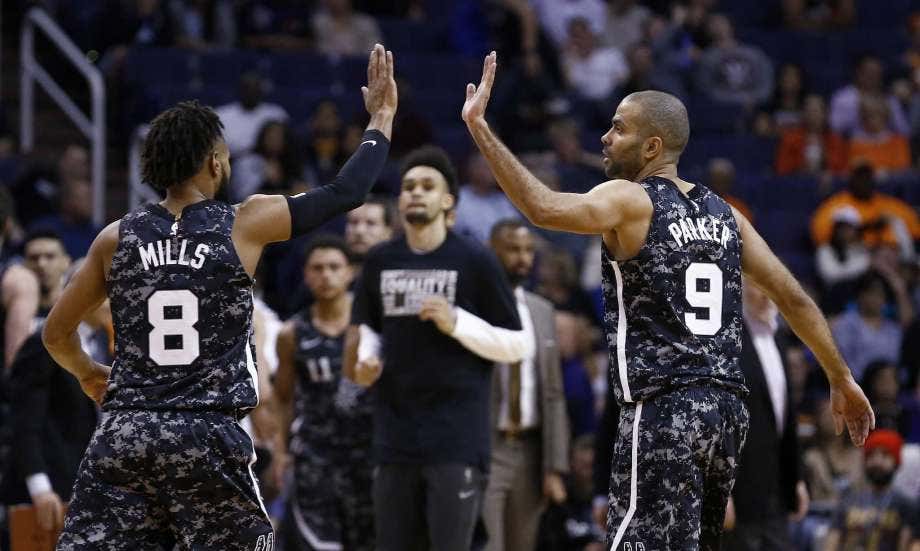 Happy Trade Deadline Thursday everybody! Before we spend the day refreshing Twitter and focusing on what trade deadline addition is going to put a team into title contention, we should take some time to actually talk about the real basketball that was played last night. We had 5 total games, most of which were exciting for one reason of another. If for whatever reason you missed the action, here’s what happened

Did the Pistons save their season with the Blake Griffin trade? Hard to argue otherwise when you consider they have now won 5 straight and are still right in the thick of things in the playoff race. This win streak is the best in the East by a few games, and all the pieces certainly look good at the moment. The honeymoon phase is one hell of a drug.

If there was any doubt how Blake and Drummons would fit playing next to each other, the early answer is pretty fucking great

and he’s had a pretty good stretch since this trade as well, averaging 16/5/2 on 45.6% shooting over his last 5 games. That’s nearly double his season average.

The Pistons now turn there focus to their next game which just so happens to be the Clippers. SOmething tells me that’ll be worth watching.

For BKN, it is too bad they wasted a career high of 34 from Allen Crabbe

and don’t look now but the Nets are now tied with DAL and ATL for the most losses on the season. As it stands now that BKN pick is slated for 7th, but it’s dropping fast. The Nets have turned into the type of team I feared they would be all year, and that is one incapable of winning. They have now lost 4 in a row and 8 of their last 9. Color me shocked that turning it over 19 times on the road didn’t work out for them.

Not sure what teams are supposed to do when Harden/CP3 combine for 65 points on 23-44 shooting.

You may not know this, but the Rockets are now 0.5 games behind GS for the top spot in the West. That seems crazy because GS had always had like a 3 game lead, but the Rockets have now won 6 in a row and are rollllling into the AS break. Its HOU not GS that now owns the best point differential in the NBA at +8.2, in fact, they actually play better defense in terms of opponent’s points than the Warrriors (108.1 vs 105.8) while averaging just 1 point fewer a night.

This is a long way of saying I believe in this version Rockets, playoff collapses be damned. They are just too good to ignore right now. As a team they shot 51.4%, they turned it over just 9 times, and despite 31 of their 74 FGA being from deep, they still got to the line 26 times. Credit the Heat for keeping this somewhat close, but the Rockets are now 20-7 on the road and just on a different level.

For MIA, this isn’t to say they didn’t have their positives. For example both Dragic and Josh Richardson dropped 30

Whiteside outplayed Capela to the tune of 16/17 in 33 minutes, but look, they need to start winning. Now losers of 5 straight MIA has slipped all the way to the 7th spot in the East, and are actually one of two teams that sit in the top 8 spots with a negative point differential. After a stretch of strong play saw them get into the 4/5 range, it;s been a brutal last 10 games (3-7) as the Heat pretty much limp into the break.

Listen CLE fans are on edge right now. Their team stinks, so who am I to take this night away from them. Sure they still gave up a billion points and none of their issues are fixed after this Lebron game winner, but at least they won a game. This is something that had been hard for the Cavs over the last 18 or so games, so let’s let them have this moment in the sun.

This was practically an All Star game considering the lack of defense that was played on both sides combined with the 40 3PM so if you love offense this was the game for you.

It also marked the 5th game winner of Lebron’s career which is pretty good, despite the fact that there was most DEFINITELY some home cooking on the clock operator on that final shot. I respect that though, you have to break a slump any way you can.

For MIN, first off, what the fell are you doing guarding the inbounds passer. What are you a moron or something Thibs? Who else did you think was going to get the ball, the new Alpha Isaiah Thomas? It seems pretty basic to know you should probably have more than one guy on Lebron James, so in that regard you deserve what happened to you you.

Also, maybe let KAT get more than 12 shots when he was by far the best offensive option all night?

There is no reason  he should be averaging around 12-13 FGA a night. Those are Al Horford shot attempt numbers and that’s a disaster when you think of who the two players are.

Jimmy Butler was Jimmy Butler to the tune of 35/5/6 on 14-21 which is great, even if he was on the wrong end of Lebron’s game saving block, he still played great

I find it wild that a team can shoot 58/57%, make 19 threes, turn it over just 11 times and still lose. The Wolves are still in an OK spot in the West, but don’t forget OKC is just 2 games back.

The hottest team in the entire NBA right now? Your Utah Jazz. Winners of 7 straight, they had to win this one ugly, and fortunately for the Jazz it was Ricky Rubio who was up for the challenge

His 29 led all scorers, and he was the only starter and one of two on the entire team that reached double digits. The Jazz continue to make little sense, as just before this they had gone on a streak where they seemed to be dropping 130+ on everybody, and then last night couldn’t manage a quarter in which they scored more than 24 points.

This win now brings them within 2.5 games of the final playoff spot, and I hope they get it. That would be an awesome story given the play of Mitchell and all the injuries this team has had to deal with. Not to mention us on the internet considered them dead after Hayward left. Go Jazz Go!

For MEM, they’ve already said they aren’t trading Gasol, they haven’t lowered their price on Evans, and shocker, they keep losing. Basically more of the same

That’s a real score. It really happened. Would you believe me if I told you this was not the first times the Suns have lost by 40+? You probably would now that I think of it. Well, the Spurs ended this one early, it was 28-9 after the first quarter, and SA went on to finish with 49/50% splits and 16 made threes while turning it over just 12 times.

Not a bad start to their annual Rodeo trip as six guys finished in double figures, and they gave us the rare double up score in the fourth quarter

For PHX, let’s just forget this game ever happened. I know they were without Booker and lost Ulis, but I’m positive that wouldn’t have made a difference. Maybe they lose by 30 instead.

But I don’t want to send you off feeling sad, so here is the one nice play from your game

And that’s it! You’re now caught up on everything that happened last night in the NBA. We have a VERY busy day on our hands with the trade deadline, but we also have some games tonight like BOS/WSH, NYK/TOR, and OKC/LAL late night. As always just check back here tomorrow and I’ll fill you in on what you missed.