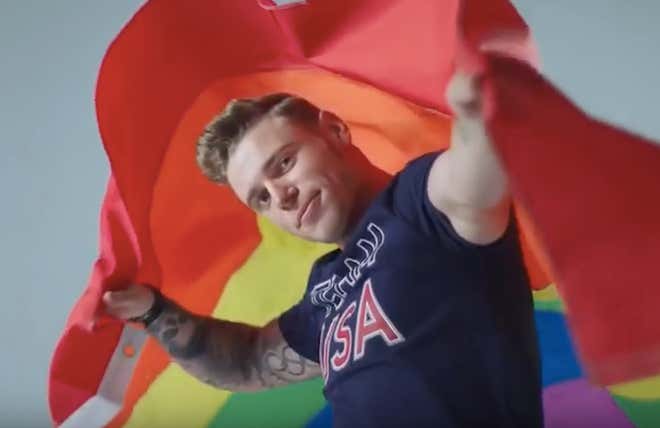 Writing stories like these is always tough. Part of me wants to avoid it all together so I don’t have to deal with the negativity. At the same time, I realize how important it is to use your voice when you have a platform to do so. When I first started at Barstool, Chaps approached me and said, “write about what’s interesting to you and you’ll do your best work.” So that’s what I’m going to do. Besides, with the Olympics right around the corner, there’s no better time to bring it up.

You may or may not have noticed the buzz surrounding the number of gay athletes competing in this year’s Olympics. There are thirteen total out-Olympians who will be traveling to Pyeongchang to compete for their respective countries. Of those thirteen, none have generated more buzz than US slopestyle/free skier, Gus Kenworthy. Gus came onto the scene four years ago as a relatively unknown twenty-two-year-old slopestyle skier in the 2014 Sochi Olympics.

Despite winning a silver medal, it wasn’t until after he came out in 2015 that he started to gain mainstream popularity. Fast-forward three years and he’s quickly become one of the biggest faces of the Olympic games. Thanks in part not only to his skill as a skier, but his authenticity as a person. He’s appeared on Ellen.

Been featured in TIME.

And was this year’s recipient of the HRC Visibility Award.

…just to name a few. Big name sponsors like Visa, Toyota, and NBC are lining up to work with him in hopes of spreading a message of inclusiveness and acceptance.

It’s wild to think that someone who was too afraid to come out just three years ago is representing not only the gay community, but our entire country on a global scale. Obviously, it’s important in the sense that it normalizes being gay and shows that LGBT people can compete at the highest level blah blah blah. What’s more important is the fact that it sets a great example for younger kids out there who may be struggling to find themselves. Not everyone realizes they’re gay as a fifth grader watching *Christopher Lowell in their mom’s suburban Massachusetts living room. Some of them need a little more coaxing. Which can be tough when the people they see on TV seem more caricature than human.

About once a week I get a DM from some kid asking for advice on coming out. It reminds me that A. people read what I write (lol) and B. that there are still people out there who actually struggle with this  stuff. Hopefully the publicity around Gus and other gay athletes at the Olympics continues, and hopefully it makes someone’s process a little easier. LET’S GO USA!