(Newsweek) – In the film, Cage plays Brent Ryan, an aging metal-head rocker who suddenly feels a biological urge to kill his son and daughter. He screams “you motherfuckers!” at his kids and punches through doors, only to swing immediately into blubbering tears. It’s a crazy conceit—even for Cage—but he felt tuned into it. The wild B-movie accelerates from zero to 90 within the first act—a rhythm he calls “operatic” and “manic”—and never lets up.

There aren’t many things I want more in this world than a legitimate Nic Cage comeback and maybe just maybe this movie can be the spark to start it all. Like Hollywood really can’t squeeze one more National Treasure out of that endless well? Not even a Face/Off 2? Con Air 2? Wicker Man 2? ANYTHING? It seems like directors are forgetting who this man is. You give Nic Cage an inch, he’s gonna take it for miles… Across the Atlantic Ocean and go buy multiple castles without a second thought. But inside of that time he’ll also give you a completely untethered performance, one that has an origin even he doesn’t understand…

“While filming 2013’s thriller Joe, for example, Cage says he prepared himself for a bar brawl scene by summoning a true story that had horrified him when he read it in the paper. “There was a little boy, only a toddler, who fell into a pit of wild dogs at the zoo,” he remembers. “There was no one there to help him, and he died. That really angered me, and I rolled that story around in me until I was ready to go.”

In one scene, his wife Kendall—played by Selma Blair, giving Cage a well-deserved partner in deadpan comedy—watches silently, with a sociopathic and unimpressed stare, as he cracks a pool table in half with a sledgehammer. All the while, he screeches “The Hokey Pokey” and tells her between swings that middle age is a living hell. The sequence wasn’t originally scripted to include “The Hokey Pokey,” but Cage added it while working through his acting process.

“I thought about those days in kindergarten where the teacher makes you get into a circle and sing the song, ‘The Hokey Pokey,’” Cage explains. “I knew even then, at 5 years old, that the Bureau of Education had created that song to separate un-coordinated kids from the coordinated. I wasn’t un-coordinated, but I was very protective of friends who were. I found the whole thing incredibly condescending and it made me angry, so I thought of that as the most despicable scene while preparing.”

“Sometimes, I luck out and the answer comes to me in a dream,” Cage says. “Other than that, I don’t know where it comes from. It’s like a trance.”

Daniel Day Lewis can chomp down on a buffet of dicks for all I care. THAT’S my method actor and he’s out here dreaming up magic nearly for free! Now granted, the last new Nic Cage movie I watched was Left Behind (BAD), still haven’t seen Joe (Good?), and I cried when he died in Kick-Ass (BAD). Needless to say it’s been a rough 5 years for both Nic and me.

But Mom & Dad seems well worth the $6.99 purchase price. I’ll likely buy it this weekend solely for that Hokey Pokey scene and the hope that my clicks can get Nic out of his undeserved cage. Can you really argue with a tagline like “A twisted remake of Home Alone on bath salts”… Plus it was written/directed by the dude who made Crank AND Crank 2 so; you know it’s pretty good.

Grab a Mountain Dew and giddy up!

PS: This is what I sleep on every night. Best birthday gift I’ve ever received. Thanks FP-JD! 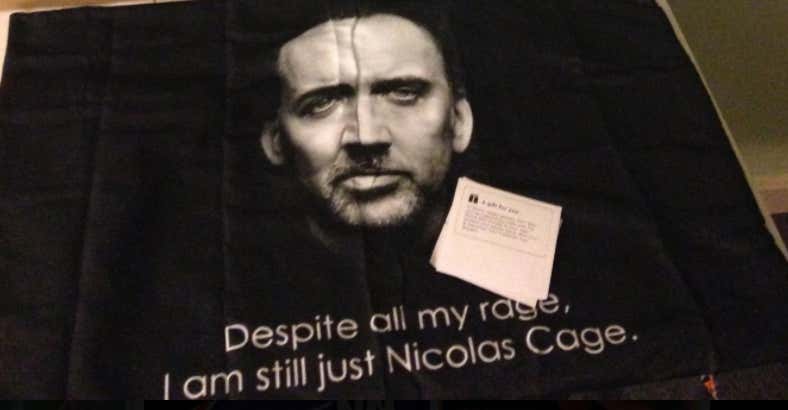