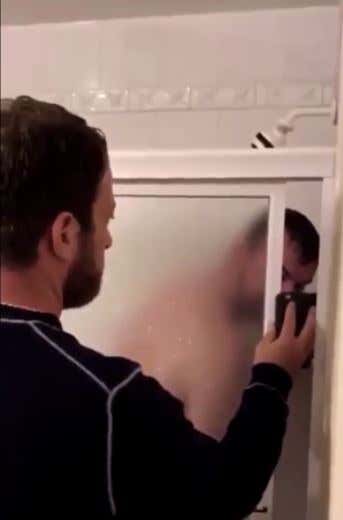 First things first. I can’t believe it took me making a harmless video of Smitty in the shower for Deadspin to finally mention KFCgate.  Like this chick Laura Wagner decided to write her magnus opum on this story while she ignored the other thing completely. So strange. Also I don’t even get mad when Univision attacks us anymore.  If anything I feel like responding is just me throwing some change at their feet.  Let them get some clicks to keep the lights on over there.  I mean they are so far below us. So bankrupt. So broke. So desperate. So defeated that I kind of enjoy when they write about us.  It reminds me of how thoroughly I have destroyed them.  When I saw this story I giggled. Oh there goes cute little bankrupt Deadspin trying to put food on table for another week by mentioning the 100 million dollar man’s name. Now roll over and let me pet your belly Laura! Roll over!

So why did I blog it then? Because I’m so sick and tired of Smitty. And it’s not just because the Eagles beat the Patriots. It’s his entire “poor Smitty” routine that he’s been doing for the past decade. Him playing the victim role with every single thing he does at Barstool. Acting like he’s somehow been wronged by me. That the reason he has never found his niche here is because I somehow hold him back. That it’s not because of his atrocious work ethic that has revealed itself time and time again. Not because he’s produced the least amount of content by every metric possible. Nope it’s my fault he is overlooked here. Because I’m mean to him or something. But through it all I always thought he was one of the guys and understood what we do here.

And then this week Dickgate happened. Smitty absolutely freaking out because I tweeted a video I made of him while he was in the shower. Basically the context of the video was that Tom Brady posted a pump up video on Instagram. I wanted him to watch it and capture his reaction. He happened to be in the shower when I went up to show it to him. So I peeked my head in and it was obvious you couldn’t see shit. No different in my mind if there was a shower curtain. I walked up and pulled the door slightly open and showed him the video and walked away saying he was scared. That’s it. A bunch of people watched it. Nobody said a peep about it. There wasn’t one comment about him being naked. I didn’t think too much of it. Then Smitty comes flying down the stairs saying I put his Dick on the internet. He was so fucking mad I thought I somehow missed something and deleted it without even looking at it.

Well it turns out I didn’t miss anything. Smitty’s dick was not on the internet. There was 0.0 nudity. It literally was just a blurry body behind the door. Not 1 person who watched the video understood what Smitty was so mad about. He then changed his argument from he was mad because his dick was on the internet to an invasion of privacy situation. Obviously Univision who hangs on everything I do and say took this story and made me seem like a pervert. Well this just proves how right I am and how stupid Smitty is. Like Deadspin 100% doesn’t understand what we do or why people love us. They constantly pull things out of context and try to make us seem like monsters. They called us a “reality show” like it was a bad thing. Basically exactly the same thing Smitty did this week. He seems to be just as clueless as they are to what we do here.

Bottomline is when you live in the Barstool house everything is content.  We are a reality show. When 20 of us live in a house for a week it is the Big Brother house for that week.  Now obviously there is a line in the sand, but if our employees don’t trust my judgement they shouldn’t be here. I wouldn’t put Smitty’s dick on the internet. I wouldn’t barge into Liz’s bathroom. But it’s fucking Smitty. Who gives a fuck? Nobody would have even noticed if Smitty didn’t make a huge deal out of it for no reason. Smitty needs little things like these to make him relevant. It’s kind of no different than when he taped Nate in Vegas without Nate’s permission and used it. This is what makes us tick. Him freaking out over this was a huge red flag for me. Unfortunately since I can’t fire him because he’ll probably sue us I now need Chef to literally murder him at Rough N Rowdy. At least he can’t sue for that. And yes I am legitimately rooting for that to happen.