I don’t know exactly what it is about the word “fuck” but when you hear somebody say it to a crowd, especially somebody who you’re not necessarily used to hearing it from, it evokes such a primitive emotional response. It just fills you with so much raw passion and joy. You watch these guys all season long. They all try to do and say the right things as the season goes on. You listen to them in interviews with the media and they’re giving their canned responses, trying to stay out of trouble and stay out of the headlines for the wrong reasons all year. Then they finally breakthrough, win a championship for this city and can let loose for the first time. They finally get to express their emotion with the city without feeling the need to hold anything back and it is glorious.

I’d say there’s going to be at least 3 million people in this city on Thursday. 3 million people who have been waiting their whole lives for this moment. Doesn’t matter if they’re 5 years old or 50 years old or 100 years old. Nobody who will be in this city on Thursday has ever seen an Eagles Super Bowl Parade so the energy here is going to be ridiculous. So you take 3 million Eagles fans who are having the best week of their lives and then have an Eagles player drop a hard F-bomb right there on the Art Museum steps? This city is going to explode.

So with that in mind, let’s set some odds on who will be the first Eagle to put themselves right up there with Chase Utley in Philly sports history.

We’ve already seen Jason Kelce put on one of the best post-championship speeches of all time. Between the multiple F-bombs, the Rocky quote and the overall electricity packed in here, I think it’s safe to say that Jason Kelce is going to bring the heat to the Parade on Thursday.

The man just won the city of Philadelphia free beer on Thursday thanks to Bud Light. You think he’s not going to be living it up all day and taking advantage of what will be the greatest party this city has ever seen? Lane provided the booze, he’s allowed to do and say whatever he wants up on that stage.

I gotta be honest. I don’t really foresee 27 dropping any “fucks” into his parade speech. He does so much with the community and shit that he’d probably rather keep it PG-13. But he’s the heart of this team. He’s the guy who provides the emotion. You listen to him speak game after game after game. He knows how to get people fired up and who knows, he might not go into his speech intending on dropping an F-bomb but you have that mic in front of your face with 3 million people in the crowd and the adrenaline takes over. He could have it in him. 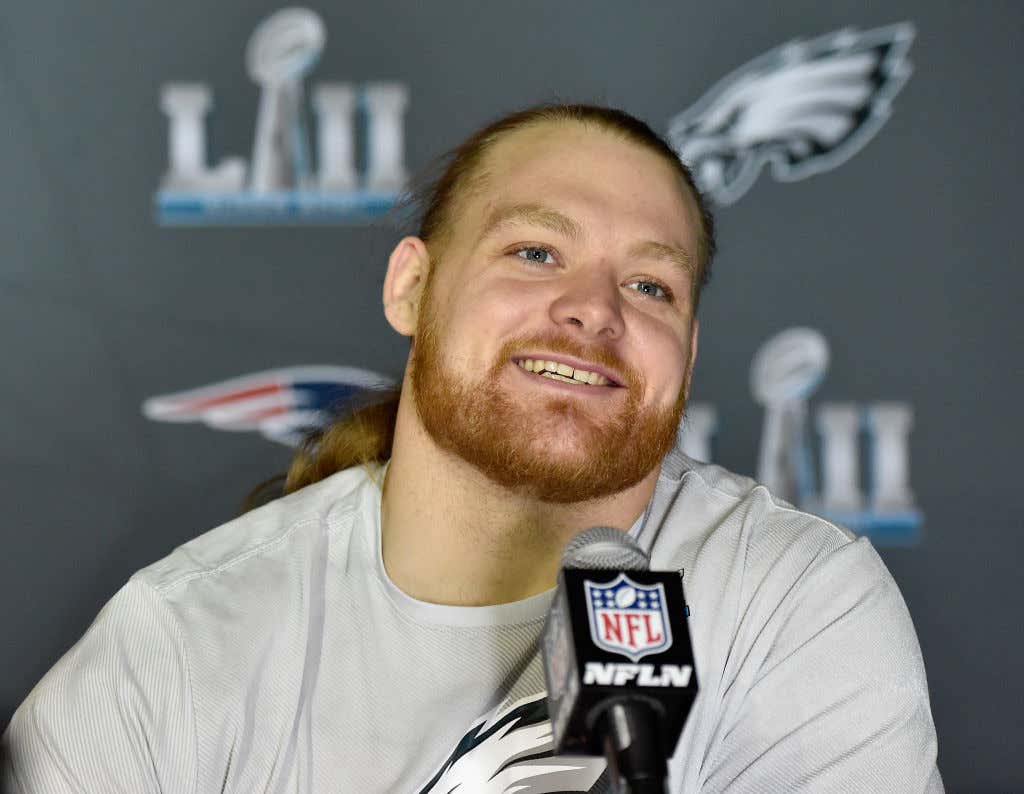 Honestly, I think Beau Allen is probably the best play you can make here for your money. I feel like an F-bomb is always just sitting their on the tip of Beau’s tongue but he’s got pretty strong control on whether the use it or not. But kind of like I said with Jenkins. When you’re up on the Art Museum steps and you’ve got millions and millions of people who are celebrating you bringing this city our first Super Bowl Championship ever, maybe the control over that F-bomb won’t be as strong as it normally is. I think he definitely lets one go, the only reason the odds are a little lower on Beau is because I’m not sure if he’ll be the first.

I think out of everybody on the Eagles’ roster, Alshon has the most swagger. He’s a shit-talker to his core. Do I think his F-bomb would hold the same sort of weight or elicit the same type of reaction as Chase’s? Not necessarily. But he could still slip one in there regardless and that’s what we’re betting on, not the reaction. 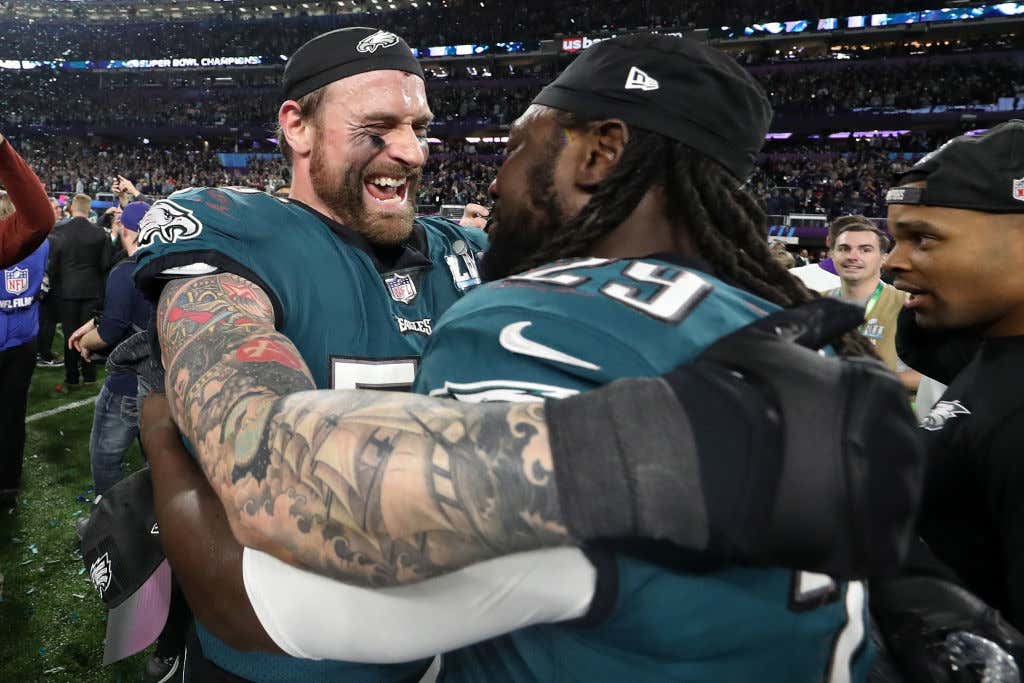 I’m sure if we go back to listen through some of episodes of Pardon My Take with recurring guest Chris Long, we will have heard him drop a few “fucks” in there from time to time. However, he also won a Snowflake of the Year award and I see a snowflake being a little more reserved up there on stage and letting the other guys hit the “fuck” quota for him.

I don’t think it’s physically possible for Brent Celek to curse. He’s just such a pure dude who does everything the right way. With that being said, he’s the longest tenured Eagle on the roster and nobody deserves to have themselves a day on Thursday more than 87. 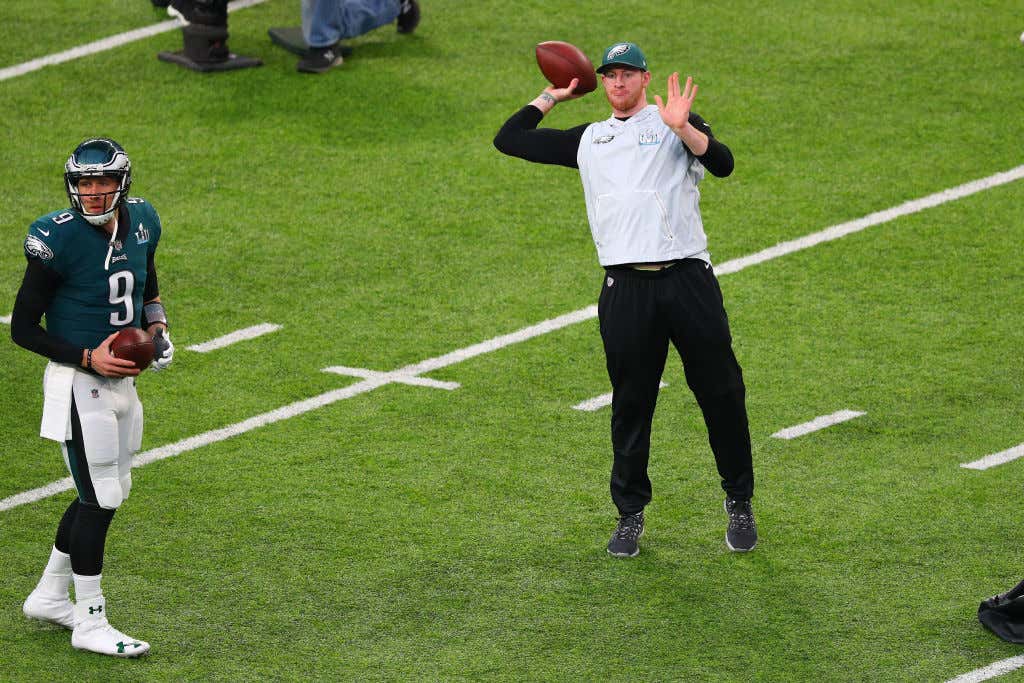 Similar to Celek, I don’t think Carson Wentz has said the word “fuck” ever before in his life. With that being said… I would ejaculate uncontrollably for 24 hours straight if he hopped on the mic and said “And I’m bringing that fuckin’ Super Bowl back here again next year”.

Jon Dorenbos – Off The Board

Doesn’t count. But if he somehow finds himself on the mic on Thursday, it’s a guarantee.