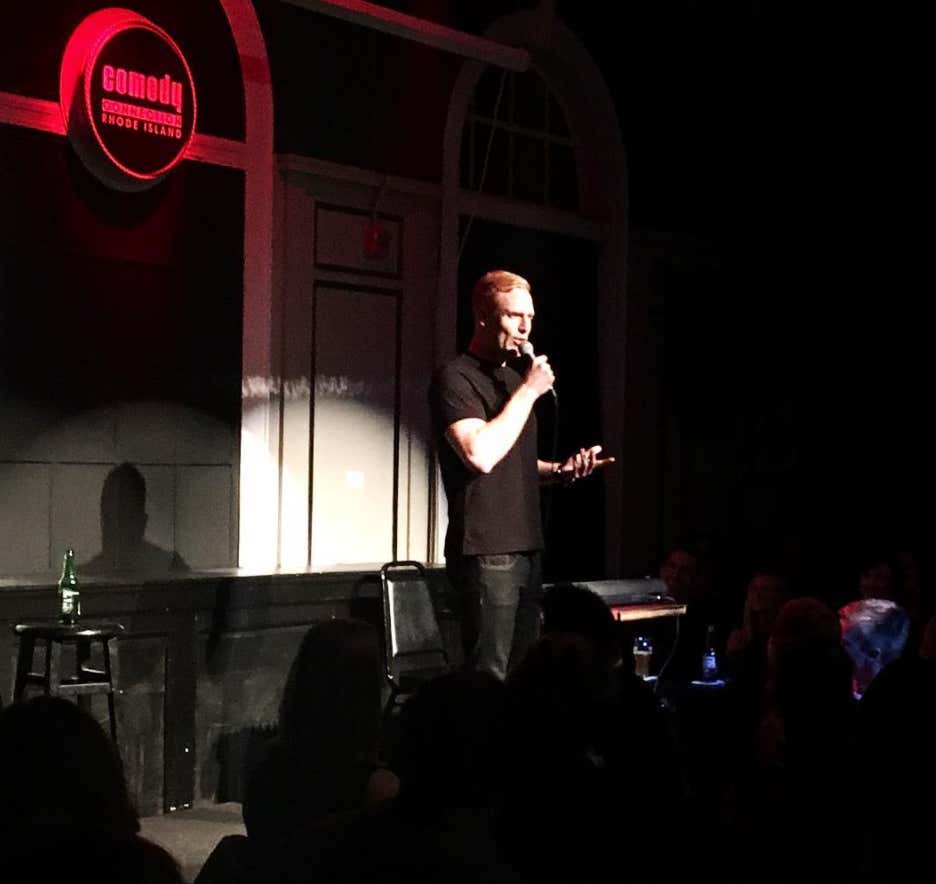 I was in Providence this past weekend, performing at the Comedy Connection. I haven’t spent much time in Providence. I went to check out Brown when I was looking at schools and discovered groups of young women braiding each other’s armpit hair on the quad (not that there’s anything wrong with that, but there’s a lot wrong with that). I was excited to return, knowing little about the city but eager to see if its people were on board with my sense of humor.

I took the train up. It’s a beautiful train ride along the coast that sees the tidal marshes of Connecticut give way to the rocky shorelines of Rhode Island. Towns are announced with farm houses and episcopal churches; stone walls crumble, spreading their fragments across fields that once caught the blood of British and American soldiers alike. We passed through New Haven, home to the country’s third-oldest university in Yale, before turning north for Providence. Stepping off the train, I braced myself against the wind that ripped off the Woonasquatucket River. As it turns out, early February is not the best time to visit Providence.

The Friday show was awesome. Afterwards, we went out and tried to find some chicks to make out with. Super fun night. The next day, we went to the mall and hung out at Dave and Busters for a while. Life on the road isn’t glamorous. But by 6PM, I was super pumped for the Saturday shows. The first one was supposed to be the highlight of the weekend. The place was packed even an hour before the show and you could feel the buzz of the audience from the green room. The host and opener both killed, so I stepped on stage to a rousing ovation from a hot crowd.

Things were going great up front. Right off the bat, the crowd was with me and I was having a ton of fun. However, 10 minutes into my set, as I was setting up a joke about children, a lady in the front row yelled the weirdest thing I’ve ever heard on stage: “SMELL MY NECKLACE.” I immediately stopped because you can’t ignore something like that. She was holding her necklace out from her neck, offering it to me. I asked her what she was talking about, and she simply repeated “Smell my necklace!”

My first thought was that she’d been hiding her necklace in her ass in some prisoner of war camp for the last 10 years, like the gold watch in Pulp Fiction. Perhaps she wanted me to smell it to learn what she’d had for dinner. But that seemed insane, and gross. So I told her there was no way I would smell her necklace because I didn’t want to offend the souls of the ex-boyfriends that she had trapped inside. The crowd liked this and hated her, so I didn’t mind the interruption. Her boyfriend was sitting across the table from her. He was a big dude but he had a man bun, so I wasn’t worried. He took the necklace away from her and said, “Jesus babe, you’re making my dick soft.” I’m not kidding you. I’m sure there were enough people at that show that can corroborate this story. “You’re making my dick soft.” A guy said that to his girlfriend in front of 240 people at a comedy show. It was terrific. Couldn’t have said it better myself. Finally, thanks to the combined efforts of her boyfriend and me, she was quiet. But I had a tough time getting back on track because it was such a strange thing to hear on stage.

Before the show, I had written a Tom Brady joke that I wanted to try. New jokes are always risky, so I held on to it until the last 10 minutes. Then, I gathered my courage and said, “Let’s hope Tom Brady doesn’t win Super Bowl MVP because they send the MVP to Disney and there are way too many kids down there for him to make out with.” The entire crowd erupted with boos. 100% of the audience booed me. It was going so well up to that point, and all of a sudden I felt like a hired clown who had taken his dick out at the kids birthday party. Too far. One guy stood up and walked out, yelling “I thought you were a Pats fan motherfucker!” I’ve walked audience members before, but usually it’s women reacting to some of my edgier gender jokes. To think that some dude in Providence loves Tom Brady so much that he couldn’t take a joke about him, at a comedy show, was baffling to me. And people say I have thin skin…

I tried to do some damage control and played a song, but by that point, I just wanted to get off stage. I mentioned this incident on twitter and a bunch of people told me I should know better than to talk about Tom Brady on the eve of the super bowl. That may be true, but I also subscribe to the theory that everything is fair game in standup. If you go to a comedy show, understand that you might hear things that make fun of stuff you like. People also told me to “know my audience.” Well, it’s impossible to know that some dude in the audience has the mental fortitude of a 7-year-old.

For the record, the late show went great. Overall, the weekend was fantastic and the club is super fun. But if you ever go to Providence, don’t say anything bad about Tom Brady and don’t smell women’s necklaces, no matter how hard they beg. It only leads to trouble.