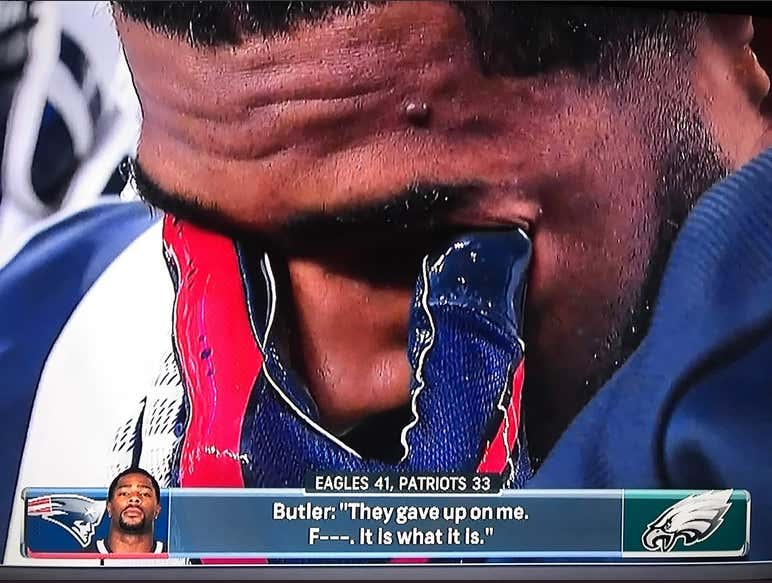 “I respect Malcolm’s competitiveness. I’m sure that he felt like he could’ve helped. I’m sure other players felt the same way. In the end, we have to make decisions that are best for the football team.”

On the thought process that went into the decision:

“It would be a much longer discussion. There are a lot of things that go into that. In the end, the final decision is what I said it was.”

On whether he considered un-benching him when his defense was getting eviscerated:

“Yeah, I just covered that.”

On why he saw Eric Rowe as a better option than Butler against three receiver sets:

“He practiced it the most.”

And there you have it, folks. The single hardest thing about being emotionally invested in the New England Patriots. It’s not the ticket prices, the weather, the traffic, all the night games, great players getting dumped without warning, coaches leaving or the whole world hating you and making up stories about the team cheating. It’s this. The dreaded Bill Belichick non-answer answers.

This is one of those moments you want him to open up, tell us what really happened and make sense of the craziest decision he’s made in 18 years in New England. To explic the inexplicable. But if you think for one second he’s going to, you’ve got another thing coming, sister.

At times like these, he asks for more patience than any of us can be reasonably expected to have. Being a Belichickian philosopher is like a Zen Buddhist and an Amish had a baby. And that baby married a Jedi. And gave birth to you. What I want more than anything is what Malcolm Butler did that was so egregious that it was worth blowing a Super Bowl over. And I don’t think that’s an exaggeration, since they couldn’t get the Eagles off the field. One more 3rd down stop. Two appearances by the Philly punting unit instead of one. One corner blitz or tackle for no gain could’ve made all the difference. But all we will ever get out of the man who made the call is this stuff about it being a football decision to give the team the best chance to win in the best interests of the football team etc, etc. Which is the opposite of the truth.

So people are beginning to fill the void with their own speculation and rumors. Someone with a connection to the team told me Butler missed the team bus to the stadium. Someone on Twitter says a Minneapolis cop told him he missed curfew. There’s other stuff out there I won’t post, not because it’s particularly horrible or worth losing a Super Bowl over, but because it’s unsubstantiated.

What we do know is that Belichick believes his secrecy and keeping this stuff in house is necessary in order to maintain the winning culture he’s established here. And putting up with it is the shittiest part of loving this Dynasty. As Father Cavanaugh put it to Rudy, “Praying is something we do in our time. The answers come in God’s time.” It would still be good to know why the hero of the Super Bowl three years ago will forever be the humiliated, disgraced, sobbing shell of a man he was in this one.