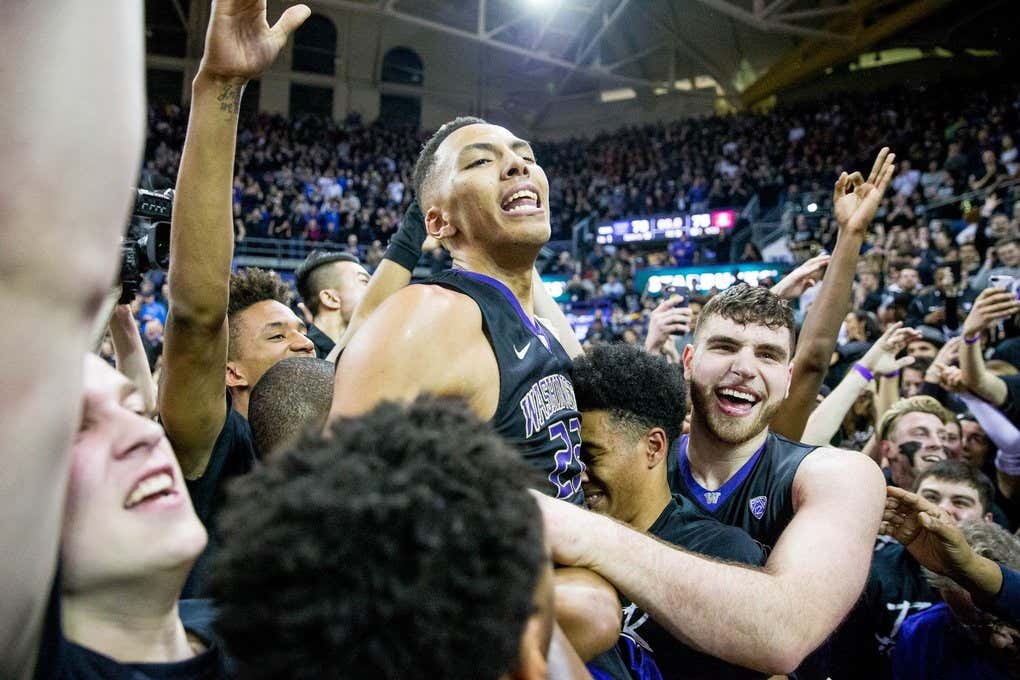 So I want to start finding different ways to recap these Saturday slates where there are a million games going on throughout the day. More importantly these slates where it seems like something significant happens almost every hour in terms of upsets or crazy finishes. I figure this week we’ll do a winners and losers blog – taking 5 from each side and just talking about it. I’m open to any ideas so let me know.

1. Washington – The Huskies got this

buzzer-beater win at home against Arizona and now are sitting on the bubble with a pretty impressive resume. Washington has a neutral court win over Kansas and now home wins over Arizona State and Arizona. It’s been quite an impressive first year for Mike Hopkins who is showing why he was at one-time the heir apparent to Boeheim at Syracuse. Washington wasn’t supposed to be this good this year. They returned just about everyone from last year (minus, you know, that guy Markelle Fultz) and everyone assumed it’d be a couple years until they competed for an NCAA Tournament berth. But, here we are and less than a month left in the season, Washington has put itself right there on the bubble.

2. Texas Tech – The Red Raiders looked like they were about to  be forgotten about and a fluke top-10 team. Now they are tied with Kansas for the Big 12 lead and already have the road win in Phog Allen. Texas Tech went into TCU yesterday and absolutely dominated the game. While Keenan Evans has been drawing a lot of the attention for Tech, yesterday is was freshman Jarrett Culver who stood out. Culver went for 20 on just 7 shots.

3. Collin Sexton making his way to the NCAA Tournament – Alabama got the road win it had to have. After beating Oklahoma in Tuscaloosa a week ago, Alabama lost to Missouri during the week. That left the Tide close to the bubble and needing a couple more marquee wins to feel safe about the NCAA Tournament berth. They got that yesterday when they went to Gainesville and beat the Gators 68-50. Sexton put up a stat line of 17/6/6 and we should get to see one of the most entertaining players in the country in the NCAA Tournament.

4. Cincinnati securing a top-4 seed: Cincinnati is in a weird spot this year. The AAC was supposed to be improved with Wichita State coming over as a preseason top-10 team. Hint: Wichita State is not a top-10 team. At this point they may not be a top-25 team. So with that happening, Cincinnati needs to roll through the AAC, especially against weaker teams like UConn as the Bearcats did yesterday. Cincinnati can likely afford a loss at Wichita State, but if Cincinnati wants to secure that top-4 seed they need to continue to do what they did against UConn. I expect to see them as a No. 3 seed in the top-16 reveal next week.

5. Auburn’s SEC title hopes – No one is taking Auburn seriously because its marquee win came at Tennessee on January 2nd when no one was sure just how good the two teams are and it’s Auburn. So, in order to gain respect Auburn is just going to win the damn league. That’s what the Tigers are doing. Auburn got one step closer beating Vanderbilt and should be a top-10 team in the rankings.

1. Duke’s bench – Seriously, why can’t K develop a bench? This has been an ongoing problem and it showed again yesterday in an ugly loss to St. John’s. When Grayson Allen is struggling, K has no one to turn to on the bench to buy some minutes and hope for a jumpstart. Everyone is talking about Duke’s defense being the biggest problem, and rightfully so, but the lack of depth is a huge issue. Yesterday was just another ugly loss for Duke.

2. Kentucky’s inability to turn the corner – It’s at the point now where we have to stop saying ‘this is the game that Kentucky can use to turn the corner.’ We said it after the come from behind victories against West Virginia and Vanderbilt. We said it when they blew out Louisville. Then they went in and lost to Missouri and struggled to be consistent on offense yet again. This team desperately needs Gilgeous-Alexander or Knox to be consistent night in and night out if they want to do anything in March.

3. Kansas refuses to win at home – Yeah, this Kansas team isn’t as dominant as years past, but it’s weird to see them lose now three times at home after yesterday’s loss to Oklahoma State. Because of that, Kansas is now tied for the Big-12 lead. The Jayhawks were starting to trend the right way, but another loss at home to what should be an inferior opponent should have Kansas fans worried just a little.

4. Marquette’s NCAA Tournament hopes – Marquette is in serious trouble. The Eagles dropped their fourth game in a row, this time a home game to Providence – another bubble team. Marquette hasn’t been able to defend this year and relies on the 3-point ball way too much. Yesterday they shot 25% from three and lost by two. Marquette now sits 4-7 in conference play and its best win is a home win over Seton Hall. There nonconference isn’t great either with just three top-100 wins and the best win being over No. 54 Vermont.

5. Syracuse’s life on the bubble – People still had Syracuse on the bubble heading into this weekend. That’s typically when Syracuse gets that win that no one sees coming. Instead the Orange are playing with just seven scholarship players and scored just 44 points against Virginia’s incredible defense. Cuse is now 15-8 overall and 4-6 in conference play. They have just 2 top-100 wins in the nonconference, one at home to Maryland and one at home to Buffalo. They’ll have chances for marquee wins at Duke and home vs Clemson/UNC, but Syracuse is likely going to miss the NCAA Tournament again, especially with just seven scholarship players.