Alright, I know there’s not a ton of people watching the UFC tonight, but I needed to get this emergency 2am blog up because I’m fucking disgusted with everything I just watched. In my breakdown for this card, here’s what I had to say about the co-main event:

What we got was much worse than I anticipated. I said Cachoeira looked like she belonged in the Rough N Rowdy. That was a lie, as she’d get fucking merked in West Virginia. The final statistics of the fight were as follows:

It was, other than CM Punk vs Mickey Gall, maybe the most lopsided fight in skill level I’ve ever seen. It was hard to watch. It was not the fun kind of violence we all love, the back and forth, no, no. It was the “THROW THE DAMN TOWEL” kind of violence, where somebody completely unexperienced stepped into the cage with one of the best strikers in women’s MMA and nobody said, “This isn’t okay.” The UFC put this fight on because they wanted Valentina Shevchenko to have a highlight reel finish to set her up for a title fight with Nicco Montano (which is LOL funny, that’ll be super lopsided as well) and I guess that’s what they got, with Shevchenko beating the everliving fuck out of Cachoeira while Mario Yamasaki did nothing about it. He’s done this time and time again and been criticized for it, and I get that being a referee in MMA is an incredibly difficult and sometimes thankless job, but that was an atrocious performance that put one of the fighters in way more danger than she needed to be in. He didn’t even see her first tap or pull Shevchenko off with any urgency. People weren’t happy. 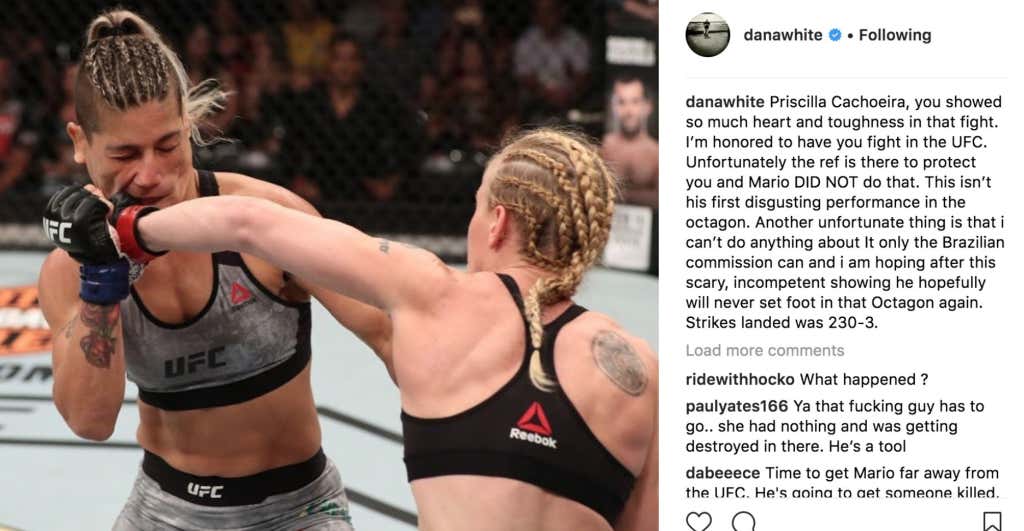 In the main event, Lyoto Machida defeated Eryk Anders via split decision, which was pretty controversial although sorta expected? I had scored the fight for Anders, as did 90% of the people on my Twitter timeline, but they all prefaced their scores with “…but they’re in Brazil so the judges will give the fight to Machida.” And they did. One judge even scored the fight a 49-46 for The Dragon, a completely fucking ridiculous and biased score that is objectively wrong. Judging is a major issue in this sport, especially in favor of hometown fighters in Brazil. It always has been. It needs to stop somewhere, sometime, because I’m just exhausted by it. You could argue Machida won. It was close. Whatever. 49-46? Give me a fucking break. Clean it up. Take it away, Teddy…