Welcome to Tom Brady’s world. Where the GOAT, who’s in Minnesota trying to win his unprecedented sixth championship, who if he wins will have a W-L record of 224-64 putting him 10 16-0 seasons above .500 for his career, and who has answered every stupid question asked of him and an insult to his 5-year-old with class, is now the center of the biggest Super Bowl controversy since Eugene Robinson left his wife and kids poolside to go buy head from an undercover cop. Because he kisses his kids on the lips. In case you missed this from CBS New York:

Of the people who spoke to CBS2, no one questioned Brady’s intentions toward his child. But they did seem to question the message he’s sending with his actions.

“I don’t think affection should ever be tied in with a favor,” said social worker and parenting expert Carolyn Meyer-Wartels.

Meyer-Wartels is a licensed clinical social worker and parenting expert. She said when it comes to physical touch, the message we send our children should be clear.

“You don’t do anything with your body because someone else is insisting that you do it in order for you to get what you want,” she said.

She said that applies even if that person is mom or dad.

Yup. So that’s where we’re at now. Tom Brady is warping his children’s souls not only with his lip-to-lip contact, but by tying their affection to favors. He’s coercing them into showing that they love him, and therefore those kids will never be whole. They’ll never be able to feel love. They’ll be permanently damaged. Hollow inside for the rest of their lives, unable to connect with other people. He might as well have just sold them to the human traffickers who took Liam Neeson’s daughter in Taken.

But wait. Then Tom vs. Time: Episode 4 dropped. The one that shows Brady and his 11-year-old Jack visiting the Great Wall of China. Brady having a bad day after losing a game but taking comfort in his younger son. Brady visiting his mom and dad in California. Tom Sr. taking him into the room where they keep all his memorabilia, including glasses filled with confetti from his Super Bowls, framed newspapers and … this: 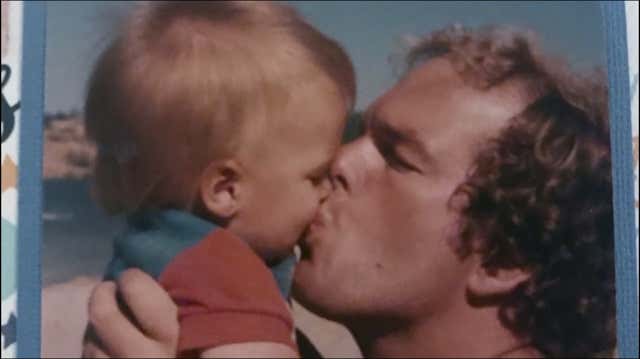 Son of a bitch! If I didn’t know better, I’d swear that’s a framed photo Tom Sr. kissing young Tom Jr. right on the mouth! And he probably tied that affection in with a favor, thus scarring his son for life. No wonder Tom Jr. has been so unable to function in normal society his whole life. It all makes sense now why he is so psychologically damaged.

At the risk of getting sincere for a minute, there’s more to this for me than just fighting back against Brady Derangement Syndrome. I fully admit I’ve got major daddy issues. I watch Jack Brady in these clips and see a kid who’s one year older than I was when my father died of heart failure. I see a kid sitting on his father’s lap while he’s breaking down game film, asking about his work and then changing the subject to something he’s hoping to get from Toys R Us and he could be me on Bud Thornton’s lap asking him to tell me stories about the war. Except those times were cut way short.

So you’ll have to forgive me for the oversized, irrational rage I have for anyone who’d dare question a father who’s made a great home for his family for the way he expresses love for his children. And any “parenting expert” who would even answer a question about it for a news site needs to have her social worker license taken down off the wall and shoved straight up her ass, hyphenated name and all.

Peyton Manning wins a Super Bowl and immediately kisses Papa John on the mouth and America doesn’t say a word. Tom Brady kisses his 11-year-old an it’s the biggest story of 2018 so far. But don’t ever lose sight of the fact that it’s not only perfectly normal, it’s part of The Patriot Way: