Source –  A sheriff’s deputy on patrol in Michigan is being hailed a hero after dashcam video shows him running to pull a driver from a burning vehicle.

The incident unfolded early Sunday at around 2:30 a.m. in Orion Township, Michigan. That’s when the sheriff’s deputy witnessed the driver speed past him, according to a press release from the Oakland County Sheriff’s Office.

The deputy then raced to catch up with the speeding driver, who lost control of his vehicle on the gravel roadway. The car flipped onto its side in a wooded area, where it burst into flames.

Video shows the deputy running up to the burning car and pulling the driver out to safety through the sunroof. Oakland County Sheriff Michael Bouchard commended the four officers on Monday for risking their own lives to save the driver who was identified as an 18-year-old male resident of Orion Township.

Situations like these always make me wonder “what if?” What if he hadn’t been speeding? Would he have crashed anyway? Would he have been able to free himself? What if Officer Bouchard wasn’t paying attention? What if he decided to let him go because it was the end of his shift? As terrible a night as it turned out for the victim, he should be thanking God that things worked out in his favor. Because judging from the video, he was minutes away from being blown to pieces. At the beginning of the video the fire was nothing more than a small glow and by the end it was lighting up the forest. 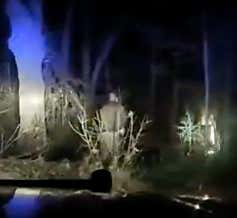 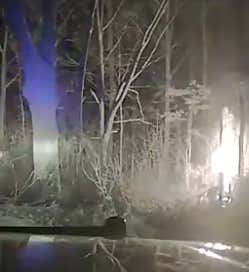 Which speaks volumes to the bravery and dedication of the responding officer. A lot of times when I see cops sitting in their cruisers on their phones I think, “what an easy gig, anyone could do that.” I forget that they also have to do stuff like this. And that they have to be ready to risk their lives at the drop of a hat because some eighteen-year-old idiot was too blitzed to drive home.

Deputies reported smelling marijuana and alcohol on him at the time of the accident, and a search warrant has been obtained for the driver’s blood, according to the press release. The 18-year-old was arrested and released after the incident. Charges are pending, the press release states.

Stoolies, let this serve as a reminder not only to not drink and dive but to respect the poe-lease. Because when push comes to shove, they’re going to be the ones who save your life.