This is me in 2012, four years into my career as a Zamboni driver. 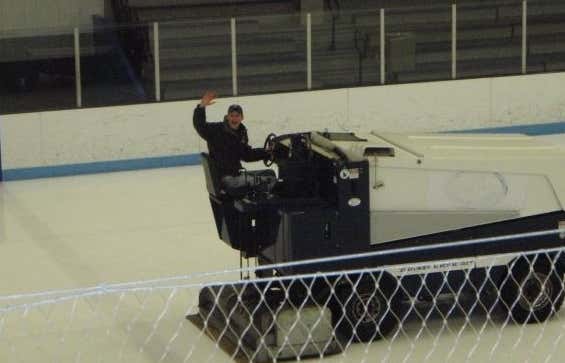 Part of my job was to watch youth hockey in between making sheets. Mites, squirts, pewees, bantams, midgets- you name it, I watched it. Most of the time they were terrible, but every once in a while you’d get some little kid who would absolutely dominate the ice. I was around the game so much that I could tell which players were going to be good based on how their parents acted before the game. Some would hang around the snack bar, others would pace back and forth, but it was the ones that drove their kids to tears always that  yielded the best results.

Having said that, I have no doubt that this guy (girl?) is going to be one of the best hockey players of all time. Even though he’s not crying you can tell he’s skating out of fear. Which is exactly what you want out of a youth athlete. You want them to play with the same urgency and desperation as a North Korean. Obviously, it’s not life and death but you want them to think it is in order to get the most out of them. Dad may seem calm, cool, and collected on camera, but I guarantee he’s a bastard the second it turns off. And I mean that in the best possible way. This five-year-old  is a stronger skater than ninety-nine percent of the kids I saw working at the rink all thanks to dad. So don’t be surprised if he starts playing juniors next year. As long as dad keeps running drills in the front yard he should be ready.