Sleep is for the weak and I need sleep, so I guess that makes me weak. But not as weak as babies, who sleep all the time and then randomly wake up in a completely different place. Fall asleep in your car seat, wake up in the food court. Terrifying.

Shout out to the random man who stood outside and showered Eli with love while I was inside Liquiteria getting my smoothie on.

Cousin Michael and Cousin Murray are talking about the OJ trial, but not necessarily about OJ, more like where they were when they saw the verdict and whether it was a shitty bar or not. Priorities people.

Now I know what time I should be in the office and I feel like a big girl!

KFC just informed me Dave won’t be on Barstool Radio with us today. Hmm. I’m wondering if we lose Frankie in all this too. Who is going to pick clever music and command the board? “If I only had a brain” isn’t going to pick itself! 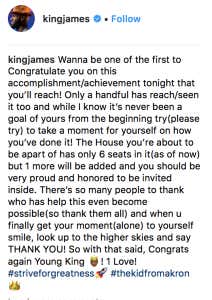 LeBron James just congratulated himself for something he hasn’t even accomplished yet. ULTIMATE D-BAG MOVE. Kevin Love can’t even be sick without the team having a secret meeting to question the validity of his illness, but King James can congratulate Prince James? Kevin Love, do yourself a favor and GET OUT!  (Also congrats to Jordan Peele for the Oscar nom, but be prepared to lose to a human fucking a fish.)

This whole LeBron non-sense reminds me of a video I saw with Chris Evans (b/c when Captain America speaks, you listen) a few years ago. Take notes Bron Bron.

My favorite day of radio so far (sorry Dave)! So much to talk about, where do I begin? For starters Mr. Portnoy, aka Cousin Mike, called in to tell us about his second day on the job, hung up, and moments later unknowingly called back. BUTT DIAL.

As if that wasn’t enough, Feits stopped by and we talked about Joshua Jackson, Tim Riggins, strip clubs, and his curry-filled date. I advised him to take a Gas X before the date, because curry is, well curry. He said his sphincter was strong. KFC and I are skeptical.

It’s gonna be a hell of a hump day. #sphincterstrong