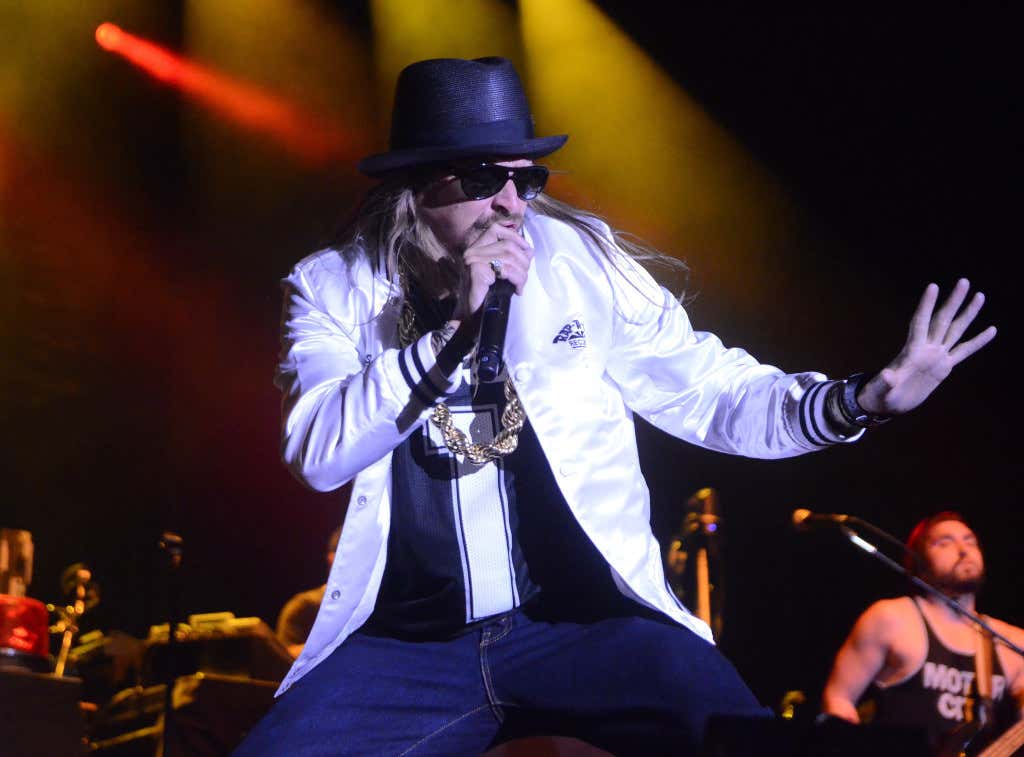 Wyshynski - The National Hockey League said Thursday that it’s aware of the backlash over Kid Rock performing at the 2018 All-Star Game in Tampa, saying that the decision to hire him was “purely based” on his entertainment value and history as a hockey fan.

The 47-year-old singer has drawn attention in the last year for endorsing President Donald Trump, his history of displaying confederate flags at concerts, criticism of NFL quarterback Colin Kaepernick’s protests during the national anthem and anti-transgender comments made during a concert…”Most of the time, our acts are passionate hockey fans,” Mayer said. “It’s all about the entertainment at the end of the day for us, and this selection was purely based on that, and the fact that Kid Rock is a hockey lover. That’s simply the background here.”

Here’s the biggest question here. What has to go wrong in your life for you to wake up one day, hear that Kid Rock will be performing at the 2018 NHL All Star Game–a performance that will be witnessed by dozens of people–and get so outraged about this decision that it leads you to writing something like this 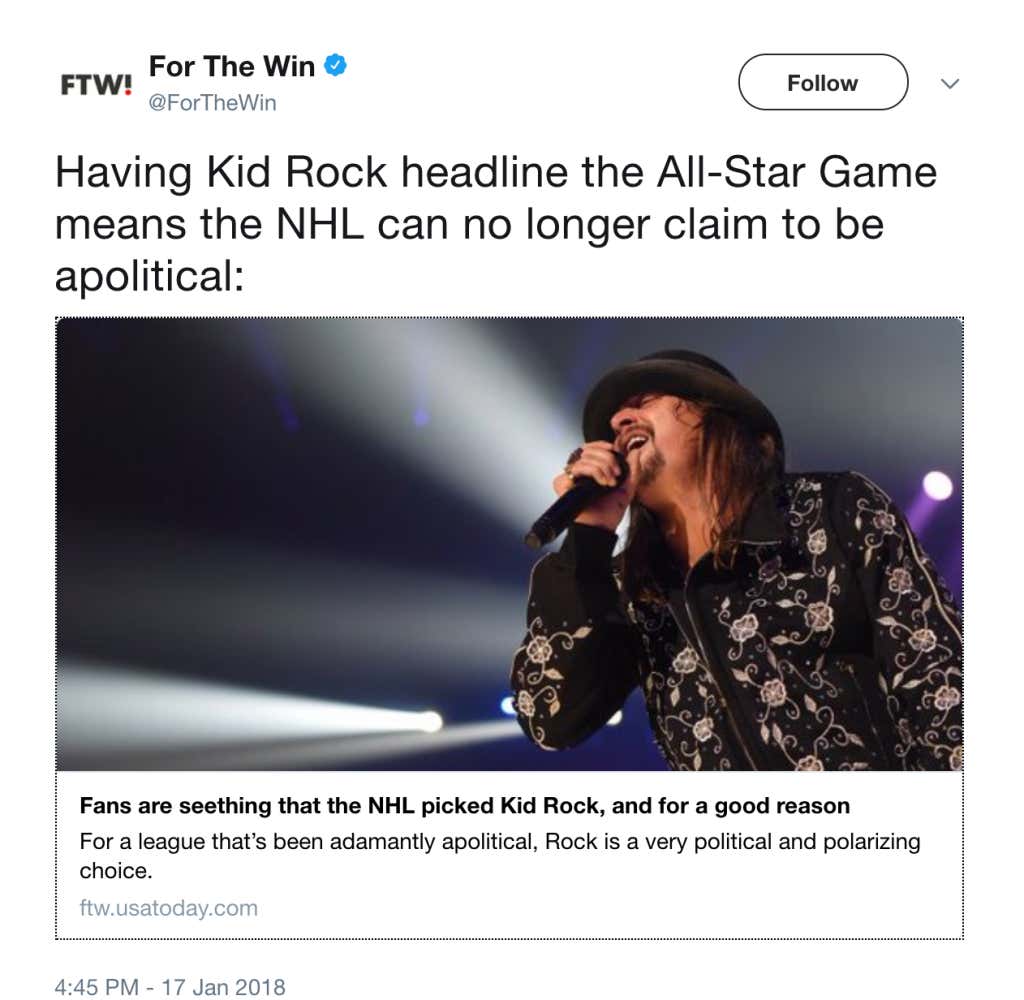 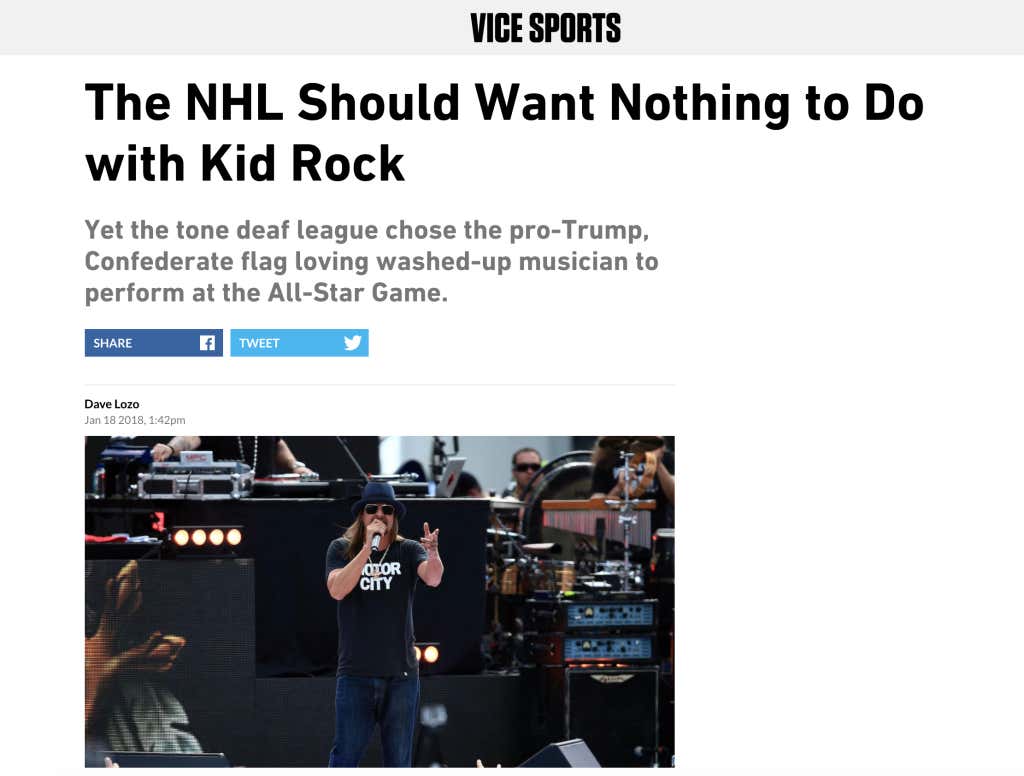 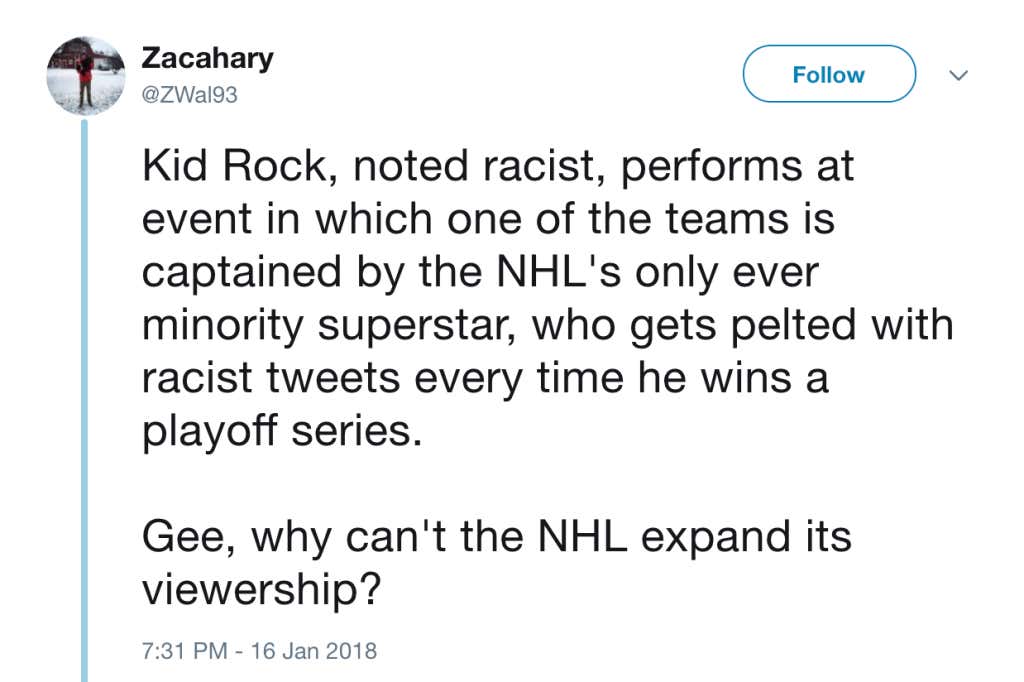 (first off, saying that PK Subban is the NHL’s only ever minority superstar is the most problematic part about this tweet if we’re being honest).

None of these are photoshopped. They are all real reaction that real humans had in the real world of the internet. I feel like I’m taking crazy pills over here. Kid Rock. A man who is most famous for singing a song with the lyrics “Bawitdaba da bang da bang diggy diggy diggy, Shake the boogie said up jump the boogie”. Those are made up fucking words by a man who goes by the name “Kid Rock” who will be performing for like 5 minutes at the NHL All Star Game in Tampa Bay, Florida. And there are people in the world who just simply cannot wrap their minds around that happening. So much so that the outrage their drumming up has forced the NHL to put out an official statement defending their decision to hire Kid Rock to perform for like 5 minutes at the All Star Game. It is pure lunacy.

Do I think Kid Rock is a kind of weird choice to perform at the All Star Game since he hasn’t put out a banger in years? Yeah I mean I guess he’s not exactly the most topical performer they could have gone with. But I also realize that this is the NHL All Star Game and he’s only going to perform for a few minutes between games. If you don’t want to watch Kid Rock, you can just go take a shit while he’s on tv and you’ll miss him. Is anybody going to die because Kid Rock is performing? No? Then what the hell is there to get upset about? Because he said he likes Trump and that he doesn’t like Colin Kaepernick? I’m sorry but what in the actual friggin’ heck do either of those things have to do with the NHL All Star Game. Do you think Gary Bettman went out searching for talent to perform at the ASG and his only criteria was “hey what’s the best way we can piss off women and minorities”? Highly unlikely. Not every single decision that anybody has ever made in the history of the world has to be a politically based decision. Kid Rock is an openly avid hockey fan and he was available. Simple as that.

And the worst part is that if you have anything to say to these people about their outrage being totally unnecessary, they just turn around and call you a racist or a misogynist or a Trump supporter or whatever. They yell and scream about the NHL getting into politics when they’re the ones who make everything political. And the reality is that you’re just a normal, rational human being who is fully capable of understanding that some people have different thoughts and beliefs as you do without getting offended. Does it maybe come across as a bit hypocritical if I’m writing a blog about how idiotic their outrage is? Perhaps. But I’m not mad at their opinion that they dislike Kid Rock. It’s the idea that they think their dislike for Kid Rock is so important that the NHL shouldn’t be allowed to hire the guy to sing for a few minutes at a hockey game. And again. It is a performance at the NHL All Star Game. Literally nobody will remember or care about the performance the next day.