HAND DOWN, MAN DOWN!!! Never has that phrase been more fitting on a basketball court, because make no mistake about it, part of that zebra’s manhood died when he hand to bend down and pick his rug off of the hardwood. If he caught the toupee before it hit the ground, mayyyyybe nobody notices since the only basketball ref that people came to the gym to see was Joey Crawford and he has been retired for a couple of years now. But once this ref let that mop slip through his fingers, he was sentenced to a life of being Toupee Ref in the district. 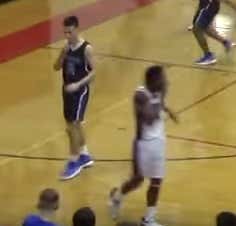 So did the bench.

And now so does the internet since the cameraman somehow caught all that as well as the saddest pat on the back you will never see. 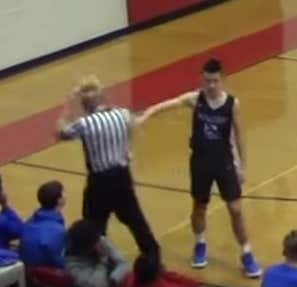 Just an absolutely brutal break for this ref. To be honest, I still can’t believe that toupees are still an actual thing that people use. We have supercomputers the size of a pack of gum in our pockets that can call someone across the planet for free. But we still can’t think of a better solution for bald people than gently placing a piece of hair on top of your head. If Elon Must can (talk) about putting humans on Mars in 20 years, it should only take him 20 days to upgrade humanity from the toupee. Or at least create some sort of athletic toupee that doesn’t require rugged up refs to keep their heads on a swivel for loose balls coming for their melon.

However the real loser in all of this is number 14 on the white team. The way the aforementioned Joey Crawford called Tim Duncan games is going to seem like homerism compared to the way this ref and his fake Donald Trump lettuce call games against number 14 and his errant passes. Once again…