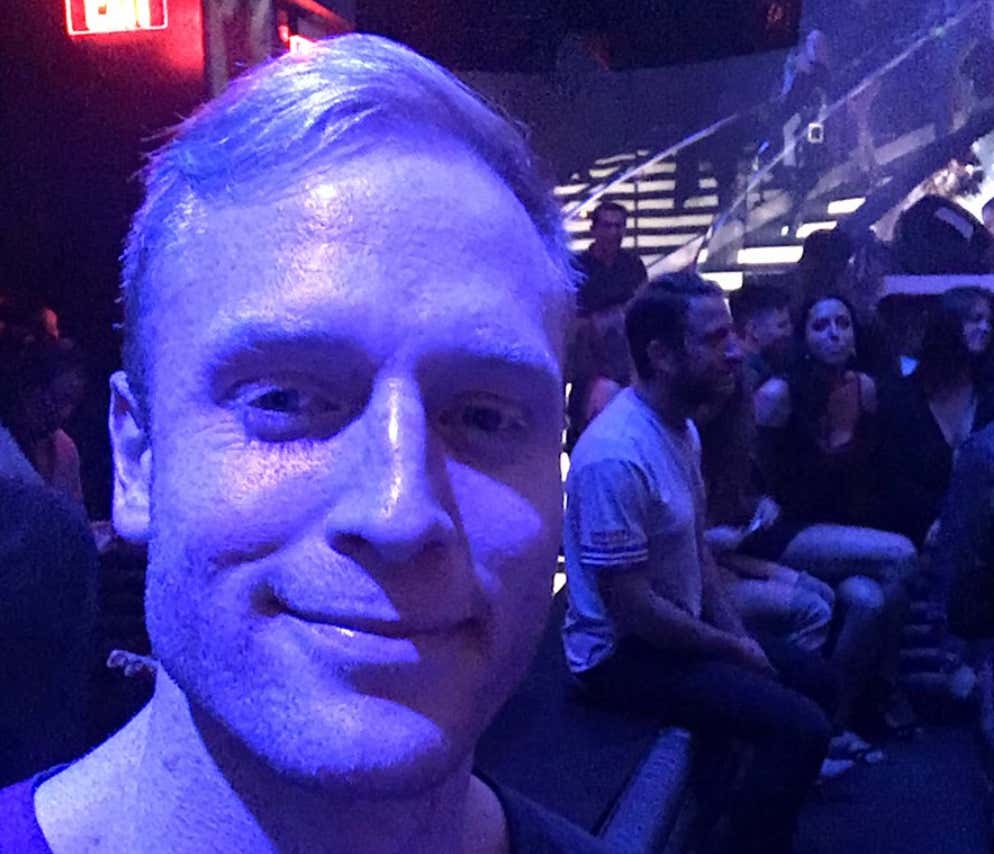 I went to Miami this weekend to blow off steam with some friends. And by blow off steam, I mean blow the coke off the hairless, silicon-stuffed cheeks and bleached 2-holes of Cuban hookers. The weather was disappointingly cool, but the streets shimmered with heat. Collins Avenue was jammed with bronzed, muscle-bound beefcakes sporting spaghetti tanks with low-cut sides that allowed this discerning, hungry voyager to see what sort of nipples were in play. One could easily distinguish the weekend-warrior gym visitors from the dedicated, 5AM lifestylists. Everyone smelled, and looked, like coconuts and anticipated sex. It was a buffet for my nose, eyes, and shaft. There were a couple girls there too.

I’d planned my trip to South Beach a few months ago. My friends and I typically head to Miami for MLK weekend because we like to celebrate the life and work of the great civil rights leader by reading his speeches on the beach before thumbing the back-pages of local papers for in-home sushi chefs that serve California rolls on the backs of naked humans (no chopsticks allowed!) I was excited to see how long I could go without sleeping–a challenge that made me think, on the flight home, that we were experiencing horrific turbulence. I was shaking like a leaf under Glenny’s chair after Chipotle.

Once we touched down, we took an Uber to our hotel and made a quick turnaround before heading out to the pool bar at SLS. There, I talked to a lot of girls. A lot. It was so hard to remember all their names because I didn’t care what their names were. But the task was made infinitely more difficult because my mind was preoccupied with finding Dave. Where was he? Was he playing hard to get? I thought about texting him but remembered that serendipitous encounters are much more meaningful. Also, I didn’t want Dave to get a text like, “hey, you up?” that early in the night. He would read it and immediately wonder if I was trying to bang him, which is so gay.

Thus, I held my thumb, drank, and kept my head on a swivel. Around 1AM, we headed to E11even, a strange semi-strip club mainstay. There were women in various states of undress, soliciting private dances with sly compliments whispered in strange tongues (Spanish). But their siren songs fell on wax-packed ears, for this sailor only had eyes for home. And by home, I mean Dave. But once again, he didn’t show. I decided to cut my losses and headed for the hotel. On the way, I stopped for a chicken club sandwich because it’s barrel season:

I woke up the next morning around 8. While my friends slumbered on, evading the rolling waves of hangovers and regret, I slipped into my lululemon apparel for some light cardio. I inclined the treadmill to 4% and took off at 9.5 for a mile to punish myself for not taking more initiative to find my main man. I was screaming the lyrics to Drake’s “Gyalchester,” omitting only the n-words because I object to racism, when some old dude came in. From his saggy turkey-neck elbows to his revolting fupa, I could tell he hadn’t stepped foot in a gym since he avoided ‘Nam. “GET THE FUCK OUT, YOU PIECE OF SHIT” I yelled. He put up his hands and slowly backed away, snagging an apple and a Golf Digest from the water station on his way. I’m sure he’ll have a lovely funeral.

We spent the day at a pool party while Dave watched his horse finish dead last. I napped in the afternoon in preparation for the biggest evening yet. We were headed to LIV–Miami’s premier night club and the last chance I had to spend some time with the man who invented the internet. Our merry band of 14 guys had pooled our savings for a dance floor table right next to the DJ. Or so we thought. When we arrived at the velvet rope, our hair shiny and flammable, the organizer told us that we’d been bumped down to the next table. We were disappointed, but it became clear that we’d been out-bid by some high roller. It was a minor setback, and as we stepped into the flashing, neon cathedral, I wondered what legend had taken the table from our very noses. It didn’t take long to figure it out…

Alright. In all seriousness, Dave took our table. By himself. There were 14 of us, and he just threw down that black card and said, “mine.” Not since the Israelis bulldozed their way through the Gaza Strip has a Jewish man so brazenly defined his territory. Of course I wasn’t mad. This is what I’d waited for. Surely, he would see me and invite me to join him. Inevitably, we would dance near each other all night long, saying things that neither of us could hear but laughing anyway out of respect for each other’s comedy. Obviously, we’d talk about getting a time share in Miami. Obviously.

Have you ever had a friend whom you trusted with your life? Someone who would be there for you, through thick and thin, through loss, struggle, and heartache? Someone to carry you those last few yards up the mountain when your tank is empty? We all hope to find a friend like that in our lives. But as it turns out, that is not the type of relationship that I have with Dave Portnoy.

Here’s how I would describe our relationship: I go somewhere. Dave is there. I say hi. He shakes his head and says, “why?” Then, I walk away.

Would you call that a healthy friendship? Me neither. And that’s when it dawned on me: I’m worth more than this. I’m not a piece of meat. I was sick and tired of taking punch after punch from this false idol. When it hit me, I ran to the bathroom of the club, locked myself in the stall, and covered my mouth as I cried. In the adjacent stalls, other men were sniffling too. At the sink, a Jamaican bathroom steward sang, “Freshen up for the poonani… poonani… poonani” and “If you want poonani tonight, freshen up!” After a few minutes, I dried my eyes with toilet paper and stepped back out to face my fears. “By God, I’m the best he’s ever going to get, and if he doesn’t appreciate that, he’s not worth it,” I thought, grabbing a breath mint. I splashed some water on my face, took a few deep breaths, and rejoined the revelry. My plan was to find the coolest-looking dudes at the club and become friends with them right in Dave’s face. I was going to build a cocoon of friendship around me, filled with high-fives and inside jokes that he would never understand. I was going to put the cock in peacocking:

But 10 minutes later, he left. Dude just fucking walked out. Didn’t say goodbye or wave. Gone with the wind. Poof! Talk about a roller-coaster.

With Dave out of the picture, I was able to start the healing process. I actually learned what it meant to stand on my own two feet.  I reconnected with all the friends I’d neglected in favor of Portnoy. I yelled at a girl for trying to pour herself a drink without permission. I rediscovered… myself.

And that, my friends, is worth more than all the bottle service in Miami.