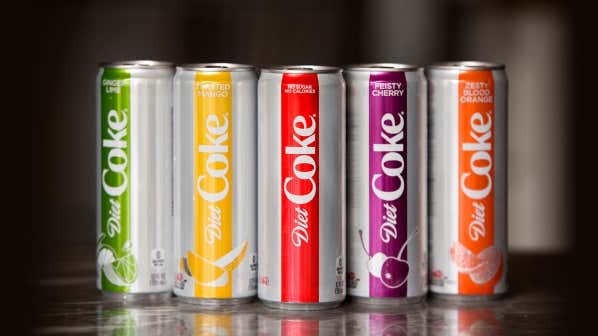 Coca Cola- After 35 years, America’s No. 1-selling zero-calorie beverage brand is entering a new era. (And no, the one-and-only Diet Coke is not being reformulated. It continues to be available nationwide.) With an updated look, sleek new packaging, the debut of four bold, new flavors and a new campaign, The Coca-Cola Company is re-energizing and modernizing Diet Coke for a new generation of drinkers – and offering its millions of current fans a new look and more flavors.

The company spoke to more than 10,000 people from across the country to get their ideas and inputs on potential flavor extensions, packaging updates and more. From these insights, Coca-Cola’s R&D team developed and tested more than 30 Diet Coke flavor combinations, featuring tropical, citrus and even botanical notes. Ultimately, Diet Coke landed on four flavors that received the most positive consumer responses. Ginger Lime, Feisty Cherry, Zesty Blood Orange and Twisted Mango bring more variety to the trademark by complementing the unique, crisp taste of Diet Coke with unexpected-yet-delicious tastes. They aim to satisfy adventurous fans’ thirst for bolder tastes and more dynamic and uplifting experiences.

What the hell is this, Diet Coke? It is my belief that Diet Coke should be plain jane as a cloudy, 55 degree day. I’ve been saying for years that diet soda is the fat man’s compromise. We load up our plate with bad food but skip the calories and sugar in the drink in order to make us not feel like completely pathetic losers. It’s our fat asses that this brand is built on. But now Diet Coke went ahead, got skinnier, dolled itself up, and is trying to leave us behind. Tale as old as time.

I have to say I am kinda terrified of these flavor names too. Twisted Mango? Zesty Blood Orange? Ginger Lime? You are Coca Cola but everyone calls your products Coke and Diet Coke because that’s how real people talk. Who thinks of mangos and blood oranges when they are looking for soda?

The two-year innovation process was fueled by consumer research pointing to younger Americans’ affinity for big, yet refreshing and great-tasting, flavors in their favorite foods and beverages – from hoppy craft beers to spicy sauces. “Millennials are now thirstier than ever for adventures and new experiences, and we want to be right by their side,” Acevedo continued. “We’re contemporizing the Diet Coke brand and portfolio with sleek packaging and new flavors that are appealing to new audiences.”

Ahhhh, it’s those goddamn millennials! I’m guessing Avocado Toast was one of the Last Four Out in the flavor brainstorming session. Well my old ass is still down for the classic. I’m here to drink something that has taste and carbonation with my meal while also not adding any inches to my considerable waist line.

And I take offense to Feisty Cherry being in this flavor list as well. Cherry Coke is pretty much the best thing Coke does outside of Santa Coke and McDonald’s Coke. Not to go Old Man Clem on Coca Cola, but I feel like foods and drinks should keep it simple. Name your flavors after a fruit or a color. Think of popsicles. Everyone loves their color of popsicles, whether its red, purple, orange, or yellow. Just kidding, yellow almost always sucks. But still, asking for a red popsicle or Cherry Coke or some purple stuff is the way to go. That being said, I will gladly accept samples of all 5 flavors for a future Snackin’ Off as long as I can try them before that food reviewing scab Rovell.