The Miami Dolphins punch a ticket to Super Bowl XIX, beating the Pittsburgh Steelers in the AFC Championship Game 45-28 at the Orange Bowl. It is the fifth AFC Championship and the second and three years for the Dolphins. Leading the way for Miami is their record-breaking MVP quarterback Dan Marino who shreds the Steelers defense completing 21 of 32 passes for 421 yards with four touchdowns.

The 1984 season was the year of Dan Marino in Miami, as the Dolphins second-year quarterback established himself as the most prolific passer in the NFL. In his second season, Marino shattered the NFL single-season record, passing for 5,084 yards with 48 touchdowns. Sparked by Marino’s arm the Dolphins dominated the AFC, winning their first 11 games on the way to posting a record of 14-2. In the Divisional Playoffs, the Dolphins avenged their 1983 playoff loss, beating the Seattle Seahawks 31-10.

In the AFC Championship Game, the Dolphins coached by Don Shula hosted the Pittsburgh Steelers led by Chuck Noll. The Steelers in the year after the retirement of Terry Bradshaw and the departure of Franco Harris finished 9-7, winning the AFC Central. In the Divisional Playoffs, the Steelers stunned the Denver Broncos 24-17 at Mile High Stadium, derailing a showdown between the NFL’s two young guns, Dan Marino and John Elway. 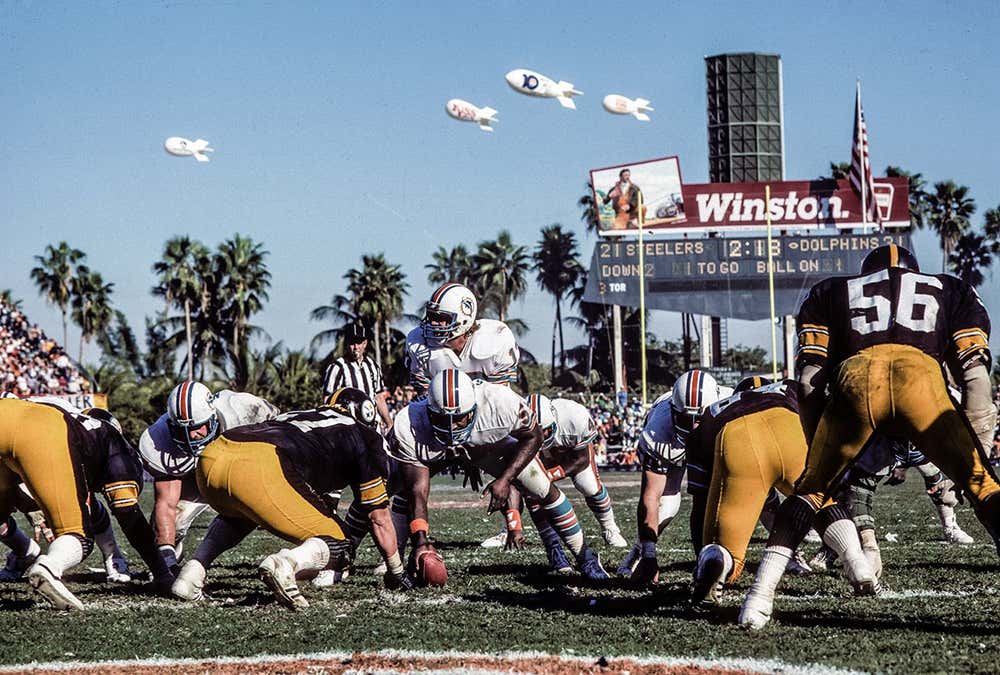 The Dolphins drew first blood, as Mark Clayton caught a 40-yard touchdown pass from Dan Marino. The Steelers quickly answered on a seven-yard run by Rich Erenberg. In the second quarter, the Dolphins regained the lead on a 26-yard field goal by Uwe von Schamann. However, the Steelers used the big play to take a brief 14-10 lead as Mark Malone hit John Stallworth on a 65-yard touchdown pass. The Dolphins answered when Marino hit Mark “Super” Duper on a 40-yard pass. The Dolphins added a two-yard score from Tony Nathan to make it 24-14 at the half. In the third quarter, the Dolphins got a 36-yard touchdown reception by Duper. After a John Stallworth score made it 31-21, Woody Bennett kept Miami in control with a one-yard run. Leading 38-21 as the fourth quarter began, the Dolphins sealed the win as Tony Nathan caught a six-yard pass from Dan Marino. The Steelers would add a third Mark Malone touchdown pass, this one to Wayne Capers, but it was too little too late as the Dolphins won the game 45-28.

The Dolphins would go on to face the San Francisco 49ers in Super Bowl XIX. The game was a virtual home game for the Niners at Stanford Stadium in Palo Alto. The 49ers who finished 15-1 had one of their best teams and beat Miami 38-16. The Dolphins and 49ers combined 29-3 record is the best matchup record-wise in the history of the Super Bowl. Despite what would be a highly successful Hall of Fame career, Dan Marino never made it back to the big game.