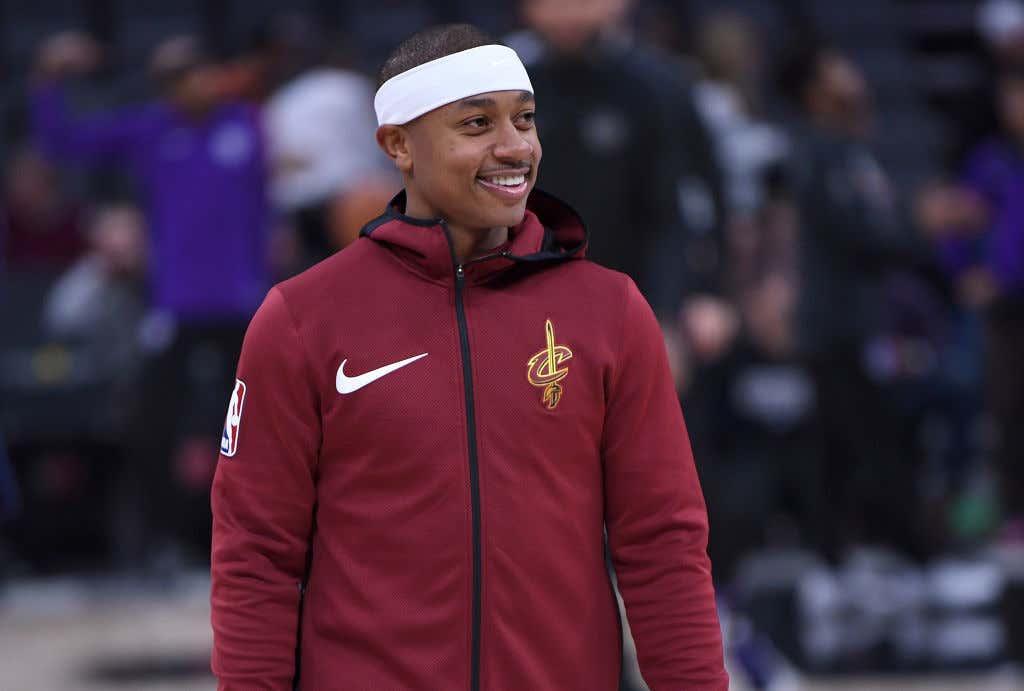 By now if you pay attention to the NBA you’ve heard the news. Isaiah Thomas is set to make his 2017-18 season debut tonight at home against Portland. This now marks the end of a 228 day countdown from the last time Isaiah has stepped on a basketball court in an NBA game, a #SLOWGrind if you will. He’ll come off the bench and be under a minutes restriction, but he’s back and the NBA is better because of it. Obviously as fans we can’t expect too much as he works his way back into shape and shakes of the rust  but no doubt about it this is a huge boost for the Cavs. I personally don’t love that, but I’m sure there are Cavs fans who are eager to see what their Kyrie replacement looks like, and how he can help.

We all know that everything in CLE revolves around Lebron, especially offensively. Surprisingly, despite missing his starting PG, Lebron’s usage rate is only 31.1%, which is in line with where he’s been his whole time in CLE. Without a respectable PG, Lebron has had to facilitate more this year, and he’s coming through with the highest assist% of his career at 45.7%, but he’s also turning it over more than ever. You look at the Cavs guard situation and it’s probably the worst in the league. They are getting almost nothing from their PG spot. Derrick Rose didn’t work out and Jose Calderon has essentially been a non factor. We see a lot more Wade at PG than we probably should, and he’s not really responding, turning it over more this year than he has in the last 4 years. He’s also a billion years old.

Any way you look at it, the Cavs desperately need Isaiah and his production to be pretty similar to what it was before he got hurt if they want to legit contend for a title. Love has been great this season, but the Cavs need that third piece, just like almost every team in the NBA does. So how can Isaiah’s game translate to his new team? Under the assumption that he is as close as possible to 100% by the postseason, here’s how Isaiah will help:

– The best we can do is assume the Cavs will use Isaiah in a very similar fashion to how they used Kyrie. Basically, Isaiah is going to have a bit of a style shock in that he’s not going to have the ball all the damn time. He will not have the same 34% usage rate in Boston, but at 100% he could definitely be right up there with the 31.8% that Kyrie had last year. The good news for the Cavs is they won’t really have to change how they play now that Isaiah is in the lineup. What I mean by that is we all know CLE is a HEAVY isolation team. They run iso 10.5% of the time which is the 3rd highest mark in the NBA. It’s only natural to think this won’t just be Lebron, but Isaiah will be given isolation opportunities as well. This is how he stacked up last year in those situations:

Cavs fans are going to love this patented Isaiah move, trust me

Basically, if you are a team that can give Isaiah space, which CLE is, he can kill you in isolation and essentially give the Cavs exactly what they lost when Kyrie left. Being such a crucial part of their offense, this is probably the most important Isaiah trait to watch.

– The one thing this year’s Cavs haven’t done all that much is score in the P&R with the ball handler. They run this just 11.8% of the time which is the fourth lowest in the league. I mean think about it, if you have Lebron handling the ball you just clear out and let him bully his way to the paint. If it’s someone like Rose/Calderon, that’s not a great option. Isaiah now will allow them to run way more P&R with him and Love, an area that Isaiah excelled in last year with Horford. Here was his production in P&R situations:

This is an area in which the Cavs should get better production than the Kyrie years, and I think we see more of it down the stretch most to help give Lebron a rest. Having solid P&R production is pretty important in today’s NBA and it’s an area that the Cavs haven’t really had at all this year from their PG spot.

– A team that currently ranks 6th in the NBA in assists per night is getting back a player that averages nearly 6 a night. Now there hasn’t been a PG during the Lebron era that averaged 6.0 assists I don’t believe, so while I don’t expect Isaiah to have the same sort of assist averages he had in Boston, it does give them another guy who is capable of drawing attention and creating for others. Again, outside of Lebron, who does that on this roster currently?

– The team who is second in the NBA in 3PM and 5th in 3P% is getting a guy that has made 460 threes while shooting 36% over the last 2.5 years. Isaiah showed last year he can be a consistent knock down three point shooter whether he’s taking it off the dribble or spotting up. Few teams chuck it from deep like CLE does, so adding this quality of an outside threat is going to open up things even more.

– It’s not all going to be positive though. There is no debating that inserting Isaiah into this CLE lineup is going to negatively impact their defense. Not that this is all that surprising, and it’s not as if CLE has been playing lights out defense without him either. Their 108.7 defensive rating is currently 28th in the league, but it certainly can’t be worse than what Calderon is giving them. The bad news is just like the Celts had to deal with, Isaiah is going to become a target during the playoff run, and I suppose the hope would be Lebron covers for a lot of his deficiencies the same way he did with Kyrie.

It will be interesting to see just how much Lebron defers to Isaiah who is one of the most dynamic scorers in the league, especially considering his age and all that. It’s been a long ass time waiting for this debut, and now that it’s hear the second half of the year just got a whole lot more exciting. It sucks that he’s not playing tomorrow in Boston, but I almost prefer it. I have no problem waiting until Feb 11th where he has a month under his belt and hopefully will be closer to who he is as a player. I want to see how the Celtics stack up against that version of CLE. Whether you’re a Cavs fan or not, I think we can all agree that the NBA is better when Isaiah is playing and doing his Isaiah things, and with a big time decision to make on his free agency after this year, it’s going to be must watch television.