I’ve been up to my eyeballs in countdown shit but I had to chime in on this real quick.  As the resident Old Fashioned guy I just had to get this out there in the public sphere.  You’ve heard of the #FakeNews movement, you’ve heard of Russia trying to manipulate the way we get our information.  Well if I let even ONE person watch this video and think it is how you make an Old Fashioned then it’s 1,000X worse than anything Putin could cook up.   This has the potential to crumble society to its core.  And since it’s Saturday night, and tomorrow is New Years Eve, and people are going to be drinking and hopefully treating themselves to some nice cocktails, let’s just run through everything she did wrong.

I’m not a muddled fruit fan.  The original Old Fashioned was invented in the 19th century and was just “sugar and bitters muddled with whiskey,” and I’m an old fashioned Old Fashioned guy.  Plus it makes it much sweeter obviously, and I don’t like sweet.   However it’s not like this is an outrageous move, it’s plenty common to muddle some orange and cherry in there, and you’ll see that at most of the places you order it.   What IS outrageous is the amount of fruit in that motherfucking glass.  Look at the size of that orange!  That’s like half of an orange.  And two cherries is crazy.

Look at how much fruit juice she ended up with. 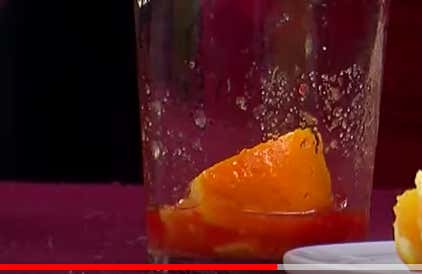 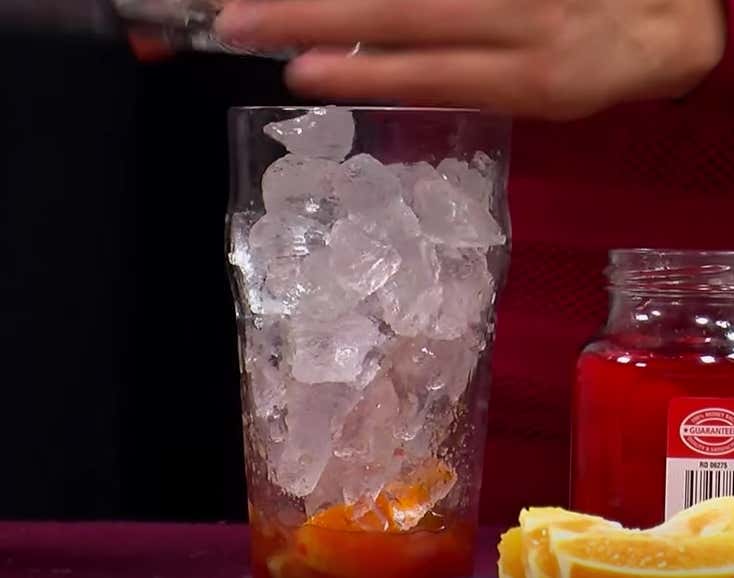 Listen even the casual whiskey drinker knows that a King Cube is the way to go.  Even if that’s too douchey for you, you’ll throw in 2 or 3 ice cubes.  What you don’t do is dump in 5 pounds of crushed ice up to the top of a pint glass you lunatic.  45% of that stuff is going to melt by the time you make it back to your table and you’ll end up with a glass of water with slight hints of whiskey and fruit.

3) The obvious – the amount of motherfucking whiskey in this thing. 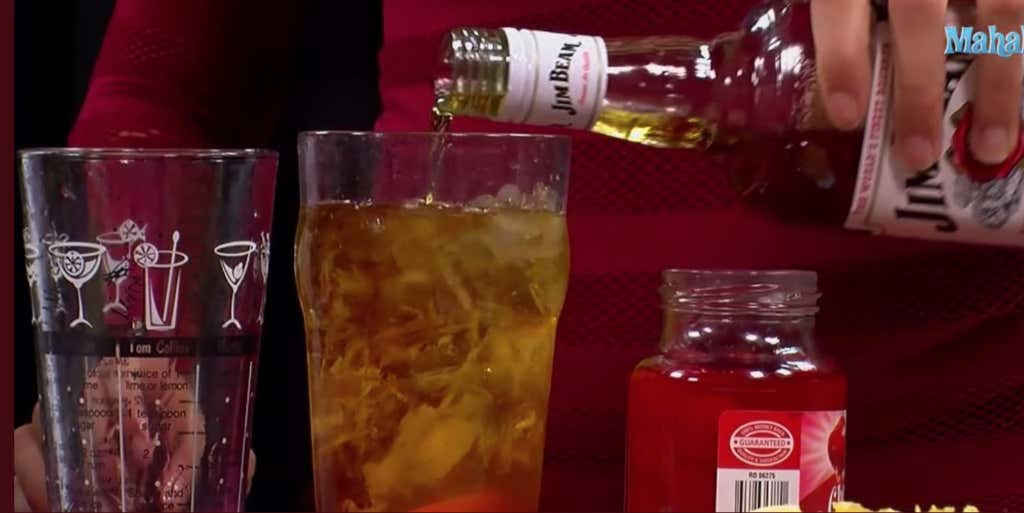 It’s no wonder she’s being voted as one of LA’s best bartenders.  Anyone that drinks one of her fucking drinks blacks out instantly and only remembers the hot blonde that was over serving them.

-Stick a nice rocks glass in the freezer

-In a mixing glass, put a sugar cube (plain white one is fine) and throw 2-3 dashes of bitters on it.

(*If you’d like to muddle fruit, now is the time to toss in a cherry and a tiny orange RIND, not slice)

-Add a tiny barspoon of water (club soda is best but water is totally fine) on top of the cube to loosen it up.

-Add 2.5 Oz of whiskey.  I like rye because it’s a little spicier but bourbon is obviously great as well.  The good thing about Old Fashioneds is you can use super cheap whiskeys and they still come out great – Old Overholt and Rittenhouse are common for bars.  I usually bump up to Bulleit Rye or Templeton if I have it.  My recommendation is to never use more than a $50 bottle to make your Old Fashioned.  Those are for drinking straight, no need to mix it up with sugar and bitters.

-Fill with ice and mix it 30-40 second in the mixing glass with a bar spoon.  Slap a common kitchen strainer on top and pour into the freezer glass with a King Cube in it.

-Peel a little slice of orange rind and either squeeze it over the top, or just drop it in there.

Yes that woman’s Old Fashioneds are perfect if you’re 17 years old and snuck into a bar with a fake ID for NYE and are trying to get as obliterated as possible.

If you’re an adult who actually likes to enjoy what they’re drinking, make the above recipe 8-10 times.  A much better way to get drunk.