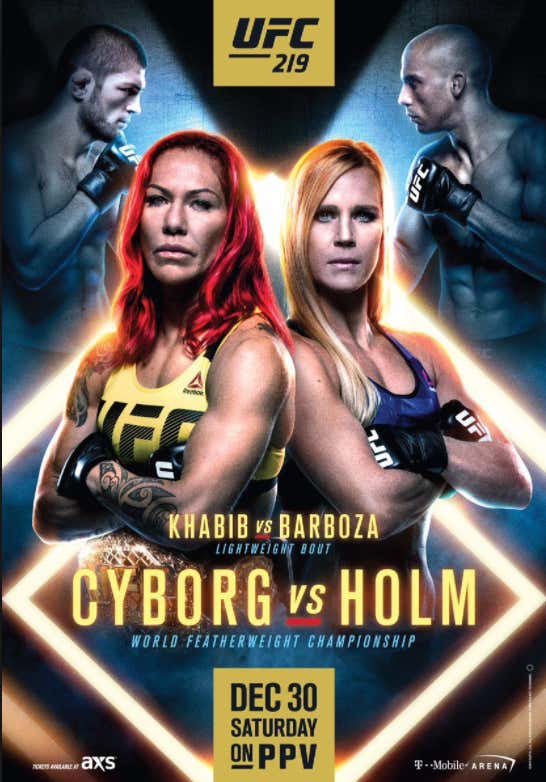 In just a few hours, UFC 219 will go LIVE on pay per view from Las Vegas, Nevada, and it’ll mark the end of the barbaric human cockfighting in 2017. It’s been a wild, WILD year in the sport, and before I go into this card a little bit, let me just run down the pay per view events of the past twelve months which I’ve had the pleasure of covering on this website for ya.

UFC 208 – Holly Holm is screwed out of a win in the first Women’s Featherweight Championship fight in company history
UFC 209 – Tyron Woodley and Stephen Thompson compete in the worst PPV main event I’ve ever seen, and Khabib yet again pulls out of a fight
UFC 210 – Daniel Cormier beats Anthony “Rumble” Johnson into retirement
UFC 211 – Stipe Miocic further cements his Heavyweight legacy (thanks to sparring with me, I’m sure)
UFC 212 – The Featherweight Titles are unified, and Max Holloway finishes Jose Aldo in the third round
UFC 213 – Robert Whittaker beats Yoel Romero to win the UFC Interim Middleweight Championship, which is now the Undisputed Middleweight Championship
UFC 214 – Jon Jones puts an end to the rivalry, knocking out Daniel Cormier via head kick while he was POSSIBLY on performance enhancing drugs!
UFC 215 – Amanda Nunes defeats Valentina Shevchenko by split decision in a snoozer of a fight, not helping Dana White’s view of her
UFC 216 – Tony Ferguson wins the Interim Lightweight Belt, but Mighty Mouse steals the night with the sickest submission I’ve ever seen
UFC 217 – The literal greatest night in UFC history
UFC 218 – Max Holloway once again finishes Jose Aldo in dominant fashion, and Francis Ngannou scares the world

Now that’s just pay per view events, and doesn’t include some of the best fights/moments of the year, or the biggest combat sports story of all time – Mayweather vs McGregor – but we don’t have all day here. We’ve got a title fight to talk about.

Cris Cyborg vs Holly Holm is undoubtably the most interesting Women’s Championship fight in a long, long time. Possibly ever, if you really take everything into account. It’s been desired heavily since Holm defeated Ronda Rousey in 2014, and it hasn’t been an easy process getting here due to contractual issues, weight cutting issues, bad judging issues, etc. Through it all, though, Holly Holm has never backed down from Cris Cyborg. That’s just not normal. When you look at the history of Cyborg’s career, everyone has ran away or backed down aside from last minute replacements or Megan Anderson. Ronda Rousey practically wrote the book on dodging Cyborg. Germaine de Randamie, the last Featherweight Champion, was happy to defend her title…until she realized she’d be defending against Cyborg, which made her suddenly realize she needed to drop the belt to get hand surgery.

Now the time has finally come for the two to step into the octagon with one other, and now is the time for Holly Holm to step up to the plate. With a win over Cyborg, she’ll likely be considered the most accomplished female MMA fighter of all time. She already probably has that title in boxing, so adding a win over an MMA fighter who hasn’t lost in over a decade would cover the umbrella statement of Holm being the most accomplished female in all of combat sports history…a title now held by Ronda Rousey, if you ask me (UFC/Judo). Cyborg, on the other hand, looks to make The Preacher’s Daughter business as usual, and continue her dominant run as the most feared fighter the division has ever seen. She has some naysayers who deny she’s ever faced someone of her caliber, and tonight, in the main event of UFC 219, she’ll have the chance to prove them wrong.

How do I think it’ll go down? Well, it’s hard to say. Holly needs to keep the fight on the feet, she needs to keep her range, and she needs to be the best counter striker she’s ever been. Cardio shouldn’t be an issue for her, but it may be for Cyborg, who will look to get the finish before Championship rounds, but has to stay composed while doing so. This isn’t her usual fight. She barely has a size advantage, which is generally her biggest strength in the cage. Holm can’t be trigger-shy like she was in her fight against Germaine back in February, though, and Cyborg can’t do as little as she did in her last fight against Tonya Evinger. Those factors make me fear a bit that this’ll be a boring standoff fight, but I won’t let that negativity cloud my hype.

I’m going with a bold pick to end the year, and I’ll be taking the +305 underdog Holly Holm to close out 2017 as the NEW UFC Featherweight Champion. Why not, eh? In my first blog ever, published a year ago today, I picked Ronda Rousey to beat Amanda Nunes, so this pick CAN’T be worse than that one. Not counting UFC 219, I did wind up going 83-57-3 on the year in MMA, and while that’s not fantastic, it’s also not horrendous! Pretty sure I’ve got Tyron Woodley beat by a large margin there.

As far as my picks for the rest of the night (which are NOT bets), they go as follows:

I’ll be tweeting along with the card all night, so make sure to click that button below and follow me on Twitter. It’ll be a fun one. Thanks folks. Tomorrow I’ll be posting my end of the year MMA Awards.