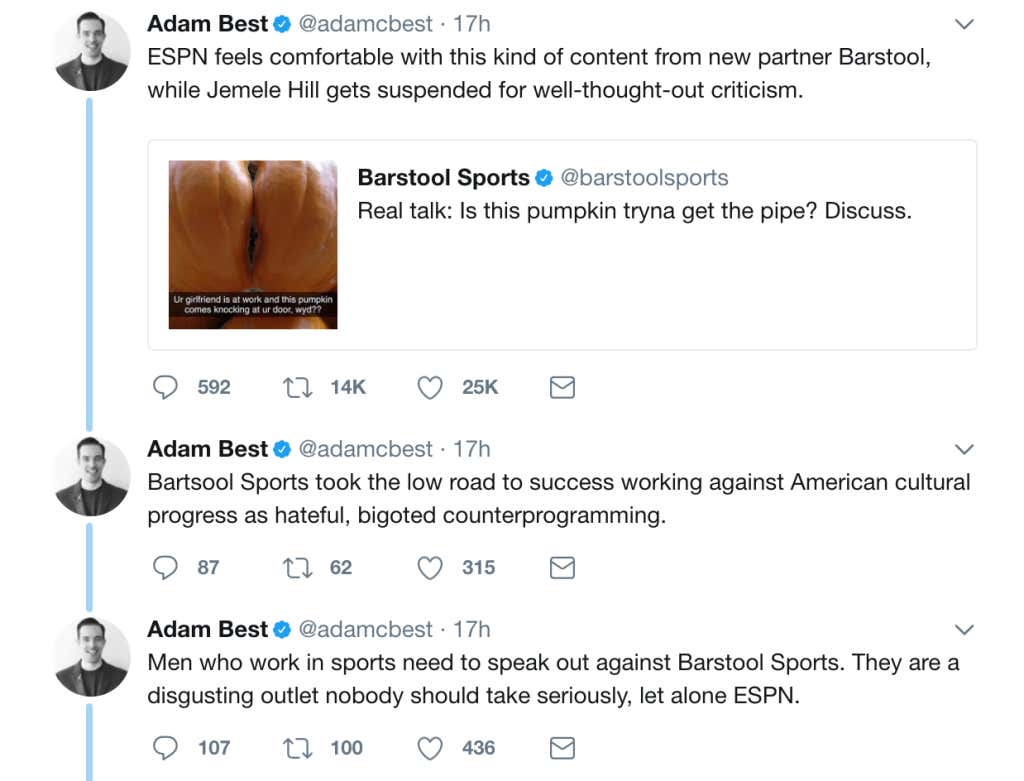 Folks, meet Adam Best. Until yesterday, I, like many, hadn’t a clue who Adam Best was. That was until he decided to take the moral high ground about a Barstool Twitter post asking if you would fuck a pumpkin. That’s correct- that’s where Adam Best decided to take his stand- because we asked if that pumpkin was tryna get the pipe. Clearly feeling himself because his tweet got a ton of RTs from circle jerk Twitter, he continued in a thread about how terrible Barstool is, how we took the low road to success by being hateful and bigoted, and how men need to speak out against Barstool. Pay close attention to the words he uses, because oh boy the irony is great later on.

So I came across these tweets thanks to my good friend, Mitch. He responded to Adam’s Tweets with a very simple question: wassup with this? 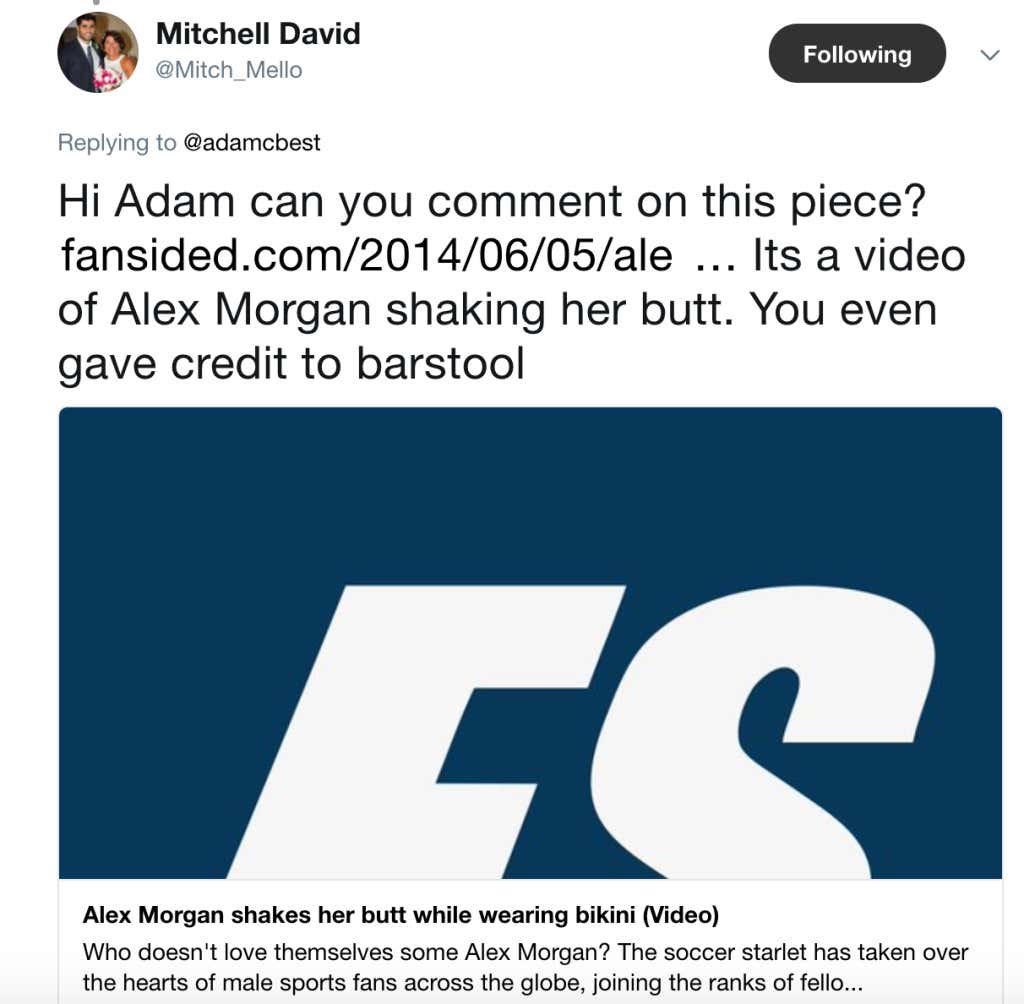 Well, that’s interesting, right? She’s won the hearts of males by shaking her ass in a bikini, and not because of her soccer ability eh? Well our friend Adam, he jumped right in and let us know this was an anomaly, a post that somehow, someway slipped through the cracks at FanSided 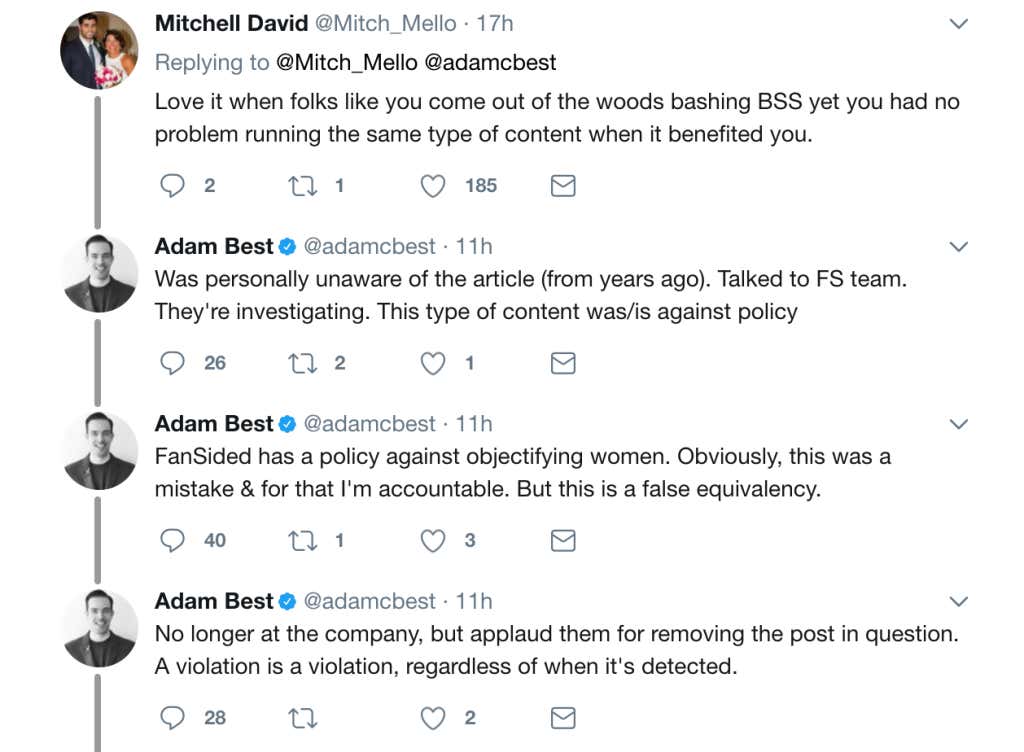 I was intrigued by Mr. Best’s statement, “This type of content was/is against policy”. I FaceTimed Mitch to see what he knew about Adam Best, and how he found this Alex Morgan thing. I then fired out a Tweet showing his hypocrisy…

…but as someone who has lived on the Internet for my entire life, I thought, hey, let’s do a quick Twitter search and find out just how against objectifying women the policy really is/was. And my friends, that’s where the fun/destruction began:

That was the first thing I found. Did a quick Twitter search of FanSided and bikini, and voila, an article from Adam Best’s time at FanSided objectifying women. I thought, hey, that was easy, and I still have 3 hours til Barstool Van Time premiers at 1am on ESPN……2, let’s keep going, I have nothing but time.

So let’s stop there. When I saw the above, that’s when I thought to myself “woah boy, this could get ugly for Adam”. So being the kind hearted man I am, I asked him a simple question: shall I go on?

He didn’t much feel like answering, so on we went, and shout out to stoolies who sent me screenshots of tweets before he deleted them.

It was at that point my fearless boss Dave suggested maybe calling it a night. But I said, Dave, I respectfully decline, for this guy might actually be the worst.

And that was the first time I shared tweets from his own personal account, not FanSided. I already exposed him as a liar and hypocrite for how he ran FanSided- the same way every blog used to operate- powered by smut.

The difference is we don’t lie about it at Barstool. We know hot chicks=clicks. But Adam Best wanted to get on his high horse and lie about it, and he was exposed to the max.

And that’s when things got even more interesting- when I started looking into his own personal tweets and seeing what type of person he really was. And let me tell you- I had never seen anything like it. Not from Jamie O’Grady, not from anyone. It was repulsive, and not just because he’s a lying weasel fake white knight rat, but as a human too.

It started with a casual rape joke:

And then some misogyny:

The ol’ sexual assault victim shaming tweet. I couldn’t believe it then, and I still can’t believe it now. This guy was up on his high horse when a tweet like that existed? Unbelievable.

At this point Adam was rapidly deleting Tweets at a furious pace. He was up to around 2,000 deleted tweets at this time, so I thought I’d help him out with some keywords he missed:

And then a tweet shaming victims of sexual assault based on her looks:

Which brings me to this set of Tweets:

That’s who we are dealing with. Man.

Now let me say this- A lot of these tweets were from years ago. 2009 was a long time ago. And that’s sort of been our point at Barstool all along. We all have skeletons. I’m sure I’ve tweeted some awful stuff along the way. I’m sure I have blogs I wish I could have back. I poked fun at the Flyers owner who died of cancer like 6 hours after he died. Everyone fucks up. But I have never, and I mean never, seen someone like Adam Best. And especially because he is now trying to be the high and mighty, holier than thou, white knight king of the internet…all because we wanted to fuck a pumpkin.

But I digress, our boy Adam ended up deleting over 17,000 tweets last night. He thought he was safe this morning but he forgot who he was fucking with.

It was shocking to see how many skeletons Adam had in his closet. All just right there on Twitter, a click of the mouse away. Of those 17,000 Tweets he deleted, who knows how many more terrible things I missed.

So what did we all learn? A few things:

1) The Internet is undefeated

2) We all have sent some tweets, blogged some blogs, said some things that we wish we could have back

3) Don’t pretend to be something you’re not, you will get exposed and it will be bad

4) Seriously, stop shaming victims of sexual assault based on their looks

6) Doris Burke is a saint, keep your name off her lips

7) If you’re a scumbag misogynistic asshole, don’t be

8) All we want to do is make people laugh, it’s really not that hard of a concept

9) The waitress is not into you, she doesn’t care you bought a 50 dollar bottle of Cab Sav

10) Don’t come at my company, my job, or my coworkers. We’ve worked too hard to let some weasel try to bring us down with his faux agenda. I haven’t slept in 4 years, and Adam Best or anyone else isn’t going to try and hurt my future or the future of anyone I work with (besides YP) without a fight.

Nate: Adam C Best Has Issued An Apology For His Sexist, Misogynistic Tweets

In case you missed it- hold on, let me start somewhere else. Fuck every single other outlet besides us for not running this story. Seriously, anything and everything we do over here is thrown under the microscope by every copy cat blog, all the Deadspins and The Big Leads and Awful Announcings of the world to write hit piece after hit piece about, and this got NOTHING.

And you might be thinking “well it’s because nobody gives a fuck about FanSided”, and you’d be absolutely right, but at the same time FanSided isn’t a small operation. Nobody cares about it, sure. But they are owned by Time Inc, they are on the SI home page…and FanSided news has been covered by those other sites in the past. But yesterday? When their founder and former CEO turns out to be this incredible misogynistic asshole, it was fucking crickets from all of them. Not a peep. All those other sites put on this guise of being so above us and so holier than thou, but at the end of the day, just like us, they aren’t looking to be good, well-rounded journalism, all they are doing is using Barstool to drive clicks. But keep pretending to be doing god’s work, you hypocrites. Barstool moves the needle so they obsess over every little thing anyone here does. Every single one of those sites are fraudulent, which once again proves the point that we do everything straight up, and those sites have agendas and all are as fake and not trustworthy as Stool Scenes.

But anyway, Adam C Best finally broke his silence at 12:32am after deleting 17,000 tweets, and apologized for his past tweets. Kind of a self-serving apology, full of cliches and a very good “as a white guy”, but an apology no less. Now let me tell you something about me- I’m a forgiving guy. I’m a 2nd chance guy. I don’t think Adam C Best is a good person. I think it is very clear that he has a scumbag brain and is a giant hypocrite and liar, and not someone to be trusted or around in a bar after midnight. But there’s no point of continuing down this road with him. He was exposed. He came at Barstool, my livelihood, my job, and I went back at him, and for whatever reason, he let me. That’s the wild part- it’s almost as if he wanted this to happen. He never locked his account. Halfway through I asked if he wanted to comment, and he declined. I don’t know what he expected to happen when he came at my life, but I bet he’s regretting getting bent out of shape about a promiscuous pumpkin right about now.

A pumpkin, you guys.

This was all about a pumpkin.

I’ll say it once, I’ll say it again, fuck, etch it onto my tombstone- nobody on the internet is perfect. We all have said things we probably want back. But the difference is at Barstool, we’ll own it. We won’t pretend to be anything we’re not. We’re a bunch of people just trying to make the internet laugh. If a joke isn’t for you, so be it, oh well, carry on with your life. But at the end of the day, the Internet was built on smut, it’s foundation is smut, and it’s sustained by smut. Just ask Adam C Best.