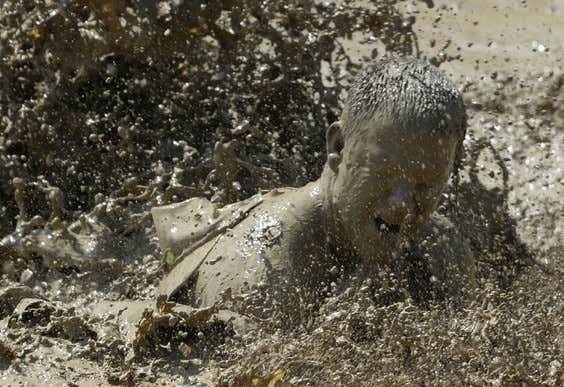 Typically, I hate when my mother in law comes to visit. It’s always a chore. She’s like a grown child who requires attention like one of my other children. Her visits are marked with loud talking, the unending self-referential third personing of the term “gramma,” and one million coffee cups on the counter. And that’s for the good visits.

Yesterday was Christmas Eve. My older daughter goes to visit her biological mother on Christmas Day, so I had to drive her to the airport. As we were gathering the luggage and whathaveyou, my mother in law lumbers down the stairs. She looks at my wife and I and ponders aloud, “should I give her a hug? I had about fifteen cases of diarrhea last night?” I stood on the bottom of the stairs with a suitcase in my hand exactly like this.

Fifteen cases? Like this is an old lady butthole episode of Law And Order: Special Toilet Unit.

Now, I’ve had diarrhea since Easter of 2007, so I’m not judging. That being said, I’m judging. I mean, my goodness, folks. You don’t announce that to the world, not when a majority of the said world hasn’t even had their coffee yet. I ignore the comment as much as I can, finish gathering my daughter’s things, and head out to Austin to see my daughter off.

I get back to my house three hours later. My wife is running last minute Christmas errands with my younger kid. It’s football time so I’m watching the games. My mother in law comes downstairs and looks me dead ass in my eyes and says, “Can you go to the store to buy me some tea tree oil? I’ll rub in in my belly button and that should help stop my diarrhea.”

I respectfully declined. I mean, come on. After that, my mother in law told my wife and I that she wouldn’t be going to church with us because “my diarrhea simply will not relent.”

Her diarrhea is apparently akin to the Taliban. It’s relentless and often overwhelming.

Before church, my wife made my favorite meal of the year. Once a year my wife makes spaghetti and meatballs from scratch. She makes the noodles, sauce, and meatballs. Nothing from a can. Everything old school. It’s amazing. Right before we sit down, my mother in law says, “I believe I’ll just have butter noodles. You know,,, because of the diarrhea.” She then started talking about how she couldnt eat the regular meal because her diarrhea was just too bad. I’m looking at red sauce, garlic, and onions while she’s talking about the river of buttmud that she’s had for 24 hours. I’m grossed out. Dinner is basically ruined. The picture of an over-wiped butthole is seared into my brain.

We go to church and come back. My mother in law is lying on the couch covered in blankets. Not just blankets but blankets that were made my wife’s great-grandmother. They are old southern-style quilts. My wife looks dumbfounded.

“Mom, where did you find those blankets?”

“Well, they were in the closet of the room I’m staying in. I was cold and they looked comfortable.”

These blankets were vacuum sealed and on top of the closet. There were about 8 blankets under the ottoman in our living room. “Mom, you can use one of the many blankets that were already downstairs.”

Now, what if I told you that during DiarrheaFest2017 that my mother in law had drunk about 3 POTS of coffee. She was going through pot after pot after pot of coffee while having a river of nasty flow through her body at an alarming rate. Would that make sense? I’m confident that you are saying no.

It’s now Christmas. I smoked a turkey. My wife prepared the sides. My mother in law called every friend she’s ever known and told them about her diarrhea. She prayed with people on the phone. She said crazy things like, “I know that god will work a blessing through this diarrhea. He always does.”

Does he? Does he though? Does god really work miracles and blessings through the loosest of stools? I mean, for fuck’s sake. I legit have no idea what that even means. Right before I started writing this, she told my wife and I, “I hope I’m strong enough to leave on Wednesday. I might have to stay until I get my strength back.”

If that happens, my soul will escape my body faster than liquids or solids through hers.