I hate to pin a loss on one player, especally when Id like to blame it on so many other players but I have to call em as I see em. 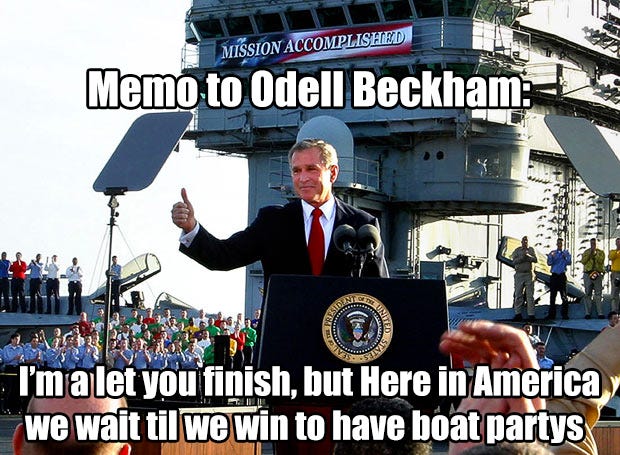 Odell Beckham Jr. could learn alot from former President Bush on when it is approprate to celebrate on a boat. Bush could of gone out to sea the second we pulled Sadam Hussein out of that spider hole, but W waited until the job was done to land on that aircraft carrier and hang up the banner. Just like Green Bay, Bush had resoundly defeated a entire population that if given the opportunty would devour the Curds entirely. I guess thats the difference between Beckham and Bush, one of them got covered up easily by Clinton Dix and the other got elected because of it. Really makes you think.

Its a misnomer to say that Beckham, Cruise, and the gang were on there off-day. Just because you didnt have work dosen’t mean that you were welcome to party however you like. This is a day where you could of been acclimating yourself to cold weather to prepare for a game instead of sunning yourself like a egotistical lizard on the deck of the USS Distraction. Its no coincidence that when God told Noah to grab two of every species he didnt include “diva wide recevers” on the list.

I cant tell if its more disrepsectful to his co-workers, or to the Giants fans who pay his salary. Number one its ill-mannered to his teammates to be showing off how much leisure time he has, especially when you know that Jason Pierre Paul would kill to have his hands full. Then on top of that these Wide Receivers cant be bothered to hang out around their fans in NYC almost like they’d rather be in Miami. Does Beckham hate the city of New York or is there something more sinister afoot? Remember, the entire plot line of “Blow” was basically Johnny Depp spending his off days going down to Miami and spending time on boats. Fortunately for OBJ if someone gave him 8 balls he’d drop at least 3 of them.

Call me a old-fashioned, but whats the point of even going on a boat if you number arent going to swim, and dont have any fishing gear? That would be like taking a trip to Green Bay in the middle of the winter without being prepared to play in a football game.

Taking this trip down to MY-ami was possibly the most selfish stunt OBJ could of pulled last week. While the rest of his team was hanging out distraction-free in New York City, Odell couldnt be bothered to keep his behavior above board. They say that out over open water you can find your way by navigating with the stars, but if the stars have a misaligned moral compass then your going to want a experienced captain to steer you to shore and I’d rather have one with a C on his chest then a Sea on his mind. Say what you want about Adolf Hitler but at least he got distracted by focusing on U-Boats, not ME-boats. And folks, if Beckham keeps up the theatrics he’ll be a sub soon enough.

Road Grader of the Week: Jeff Fisher, seen here carrying a dog in a airport 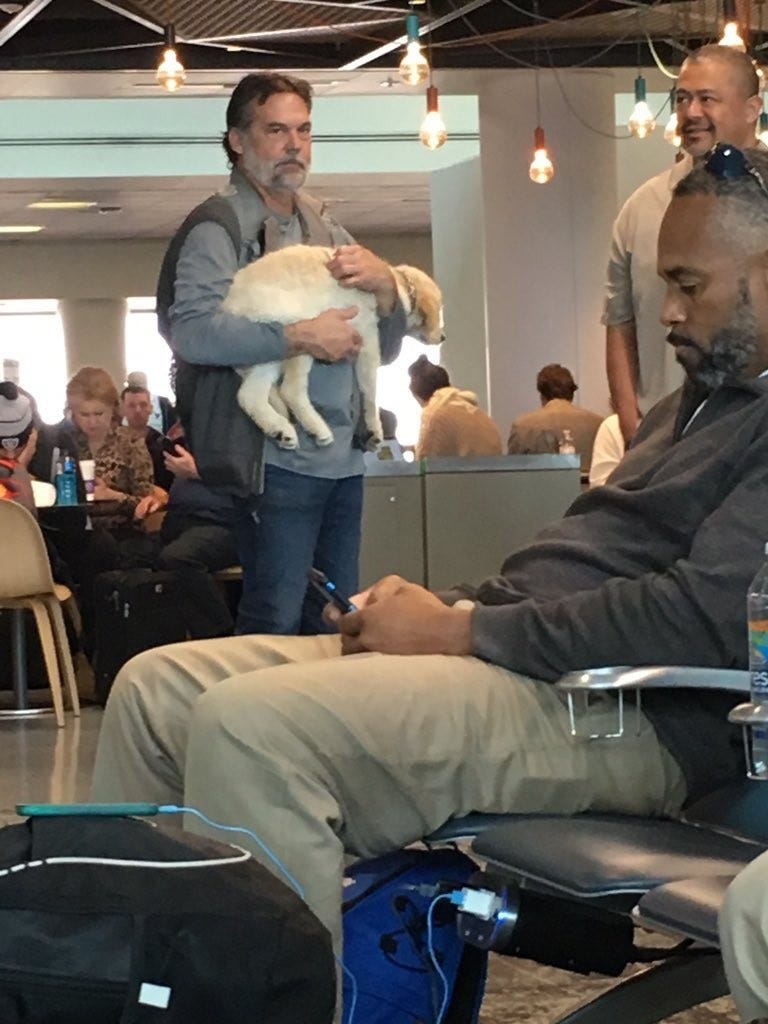 I was starting to get a little worried about our man Jeff but thankfully he looks like things are going pretty well for him so far this offseason. hes got the unemployed beard, the fleece vest that you can basicaly wear for 5 days in a row and its not considered to be dirty, and most importantly he got himself a little pup to keep him occupied.

Theres alwso a quiet sexualty oozing out of Fisher here that does not go unnoticed. The kind of look that says “Hey babe. If I wasnt carrying this dog right now I would tear off that miniskirt and eat that ass like its a ham supper.” Call me crazy but I think unemployed Jeff Fisher is my favorite version of him. Looks like he’s been working on that novel and taking care of alot of backlogged lawn work he’s been meaning to get to for the past 15 years. Also- my favorite part about this is he was literaly flying “coach.” Such a football guy.

1. Ben Rothlisberger was more likely to of gotten hurt by not playing on that last possession then remaining in the game. Ben plays better when he’s hurt than when he’s healthy because if he’s completely healthy he takes to many chances. You dont want a spry big ben running around willy-nilly out there in society thats when bad things start to happen. Our goverment has a system of checks and balances in place to prevent one branch from becoming to powerful and that’s exactly what Ben’s body does to himself. Its a self-preservation technique at this point for his own body to regulate himself like a governor on a golf cart.

2. Odell Beckham did some “fist graffiti” after the game and hit a wall, literally this time. This type of entited attitude and knee-jerk anti-wall sentiment is exactly why Trump won.

3. Joey Porter, whose name literaly translates to coffee, beer, is waking up this morning to the smell of instant folgers and a communal toilet in a drunk tank. Ironically, his arrest last night will actually help him remain focused on this weeks upcoming matchup verse the Kansas City Chiefs since he wont be eligible to cross state lines or venture out to international waters. If Beckham had been arrested the Sunday night after beating the R-words we might be reading about Odell going to Big D instead of Joey Porter acting like one.

4. Jadeveon Clowneys emergence has proven that perhaps JJ Watt is a system defensive end after all.  Clowney made Connor Cook look pedestrian in the annual Houston Texans wild card Saturday day game, presented by Angie’s List. Houston is travelling up to New England as a 16 point underdog in a hotly anticpated rematch of Brock verse Brissett. In a game like this I almost feel like it would be more fair to give Belichick a exact number he has to hit without going over. If you told Belichick he had to score exactly 30 points in this game to win I bet you he does it 4 times out of 5.

5. For an athiest, Aaron Rodgers sure seems to convert on alot of Hail Mary’s.

6. Funny how the Cheattle Cheathawks dont get called for any penalties because the refs are very keenly aware of the fact that Pete Carrol will rant and rave at the first sight of a false flag. He is so far inside the officials heads that its not even funny at this point. You know what else isnt even funny? The fact that Earl Thomas has aligned himself with the only person on the planet who is almost as disrespectfull towards the free press as Marshawn Lynch- Vladamir Putin.

7. This is how boating life is done folks.

8. The College Football National Championship game is tonight featuring South Carolina verse Alabama in the battle of which state contains more fugitives from the other one. In case you havent heard, Dabo Swinney was a walk-on at Alabama back in like 1990 and if we know anything about Alabama University its that its not allways easy to walk-on to that campus given the obstacles that stand in your way wether it be a roster of 5-star recruits or a racist Governor standing in a doorway.

Fortunately for Alabama, walking sack-tap Lane Kiffin has moved along and the team is free to concentrate distraction-free with Steve Sarkisian. I said a few years ago that “Kiffining” was the new trend where you walk around with the top of your boner poking out of the top of your wasteband and call anyone who looks at it gay. Well “Sarking” is when you take over another mans job and find a bunch of his porn in your new office and you let your secretary find it just to kind of gauge her reaction to see if shed be cool to party. At any rate I sincereley hope that Alabamas game plan has mysteriously made its way from a FAU.edu email address into Dabo’s wife’s secret email account because I’m rooting hard for Clemson, Peter Boulware, and their commitment to truly digging deep to win:

Might want to wash that trophy before you kiss it, Tigers.

Love Nelsons toughness here. Your spleens a long way from your guts, so Jordy should be able to grit it out even if its the worse case scenario. I’m not a doctor but it seems to me like the Spleen is one of those organs we didnt hear much about until 10 years ago or so, and now everyone has a problem with it. The Spleen is basically become to NFL players what Gluten sensitivty is to moms that you went to high school with on facebook. Everyone who claims to have a spleen problem needs to look at there heart instead.

10. Leveon Bell, aka the great hesitator needs to get more decisive. Folks I havent seen someone who was destined to be a NFL running back so hesitant to hit a hole since Tim Tebow. In High School, if we ran like that in practice coach wouldnt buy us beer later. Seems like Bell could of used some better role models in his life.

69 of the week: David Bakthiari

Bakthiari has quickly become a favorite player of mine given his hair is allmost as cool as me plus he seems to block a little harder when my man Aaron Ripkowski is in the game. However I think that players whose hair covere there name-plate should get a flag. Its like burning off your finger tips to hide your prints or covering up a license plate when your going through a toll booth without paying:

Also just in general the Packers offense of line looks like a nu-metal band made entirely out of bass-guitarists. Pretty badass guys IMO: 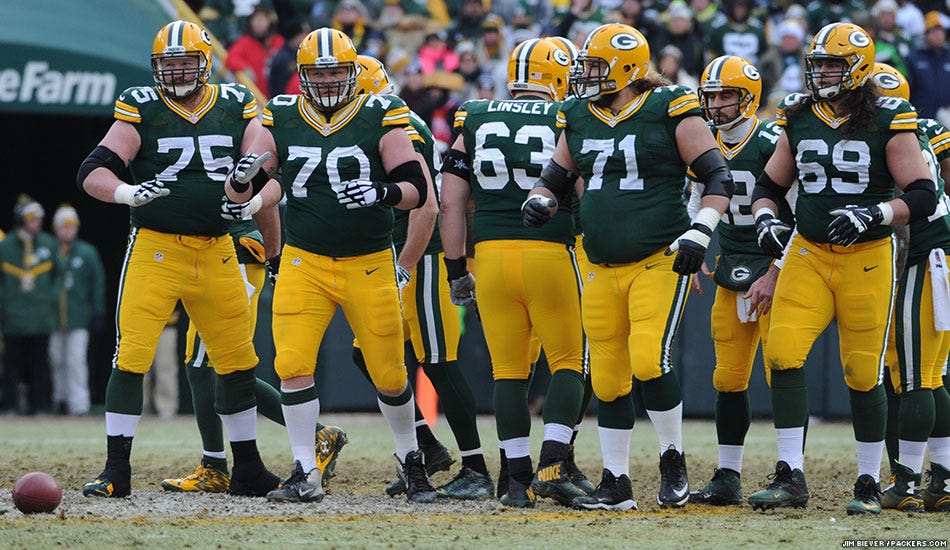