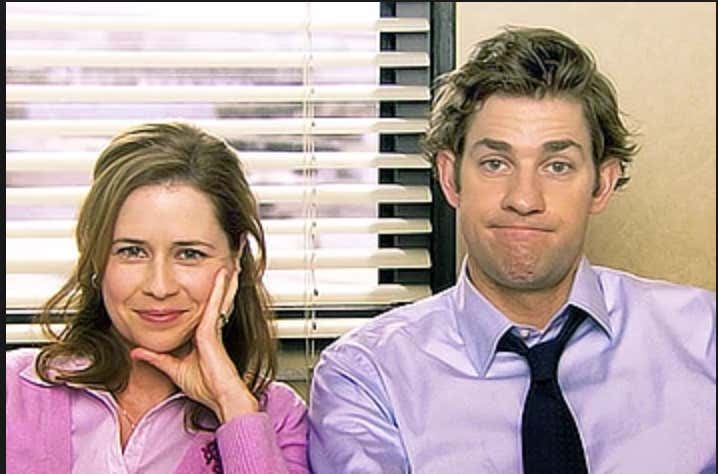 Recently, I’ve been working my way through The Office again. I just got to the part where Jim breaks things off with Karen, decides not to take the job in New York, and moves back to give things a try with Pam.

Pam’s smile there is as bright as the sun. You know that Jim must have had a pit deep in his stomach before asking Pam on a real date. They had such a history. After Pam and Roy’s breakup, Roy trying to fight Jim, and Jim’s failed relationship with Karen, the stars finally were aligning for Jim and Pam to be together. In the words of our beloved Kevin, Pam Beasley and Jim… or PB&J were at long last gonna give it a go.

That got me thinking…

Did Jim and Pam fuck on the first date? I think the answer is pretty obvious. I ran a poll for exactly 3 minutes to see what the people thought. Here’s the results: 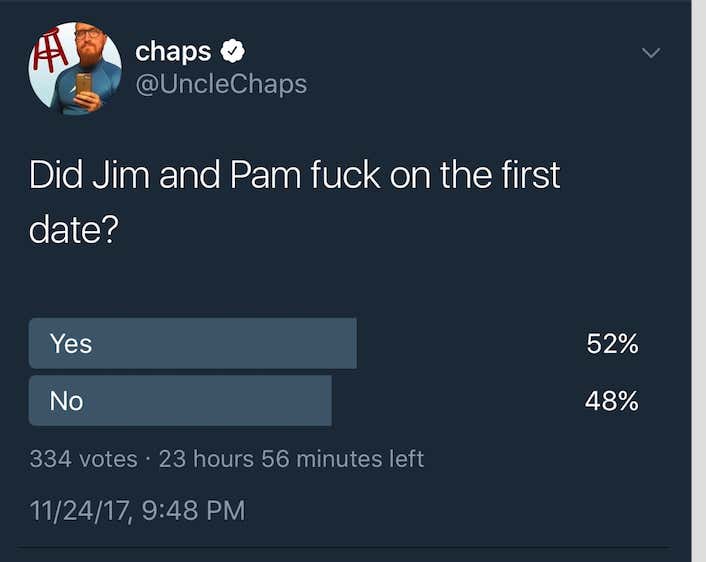 Much closer than I thought. I thought that people would absolutely believe that Jim and Pam fucked on the first date.

It’s a first date technically; in reality, it’s the consummation of a long courtship that you didn’t even realize was a courtship until the years went by. You won’t waste a moment from here on out. It took years to get this point. Those years have flown by. These moments until your first date will seem like decades.

My next blog will be detailing what actually happened on their first date. Take some time to get your mind right. We are headed down a long road of romance.

Chaps: Jim And Pam’s First Date Was A Story Left Untold… Until Now 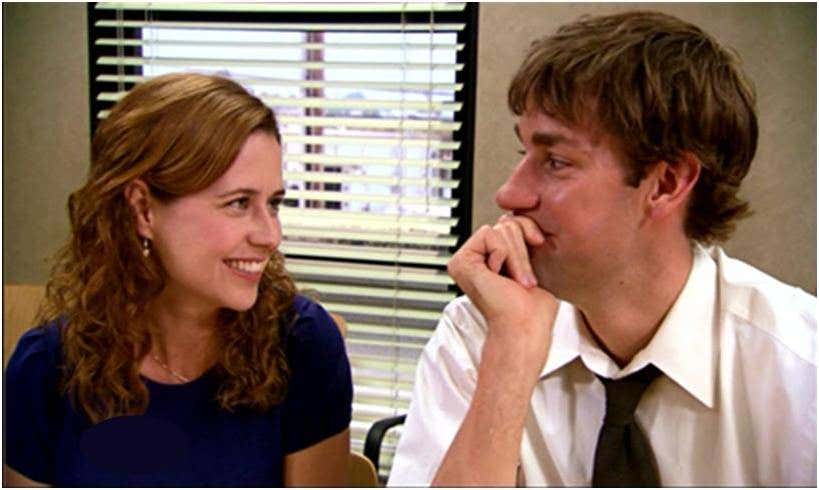 After years of wondering how one of America’s favorite couples first date went, I’m glad to be the one who finally gets to share their story. Shall we begin? I’ll give you a moment to adjust the volume on your computer or headphones. We need a soundtrack, folks. Here we go:

Jim was nervous. Pam decided that she wanted to drive herself to his house. Was it planned? Did she want to drive knowing that she would have a few too many glasses of wine and need to stay over? Logically, that’s what happened. Jim wouldn’t be able to drive her home because then her car would still be at his apartment. When her intentions became more clear, Jim looked at the camera and smirked. It was finally going to happen.

Jim opened the door and saw Pam standing there. He couldn’t believe his eyes. In her hands, she was holding the teapot that he had bought for her a few years ago during Secret Santa. 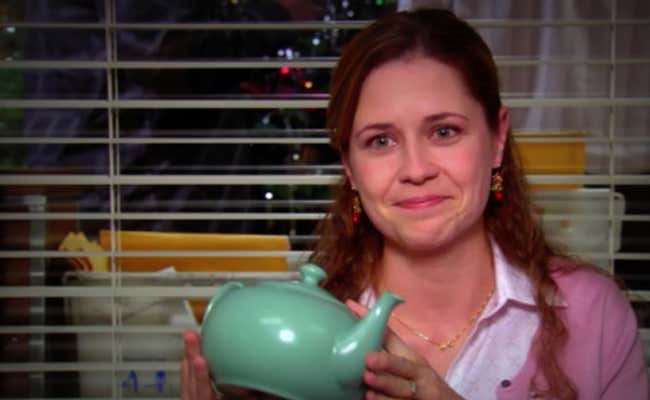 “I know you said we were having wine, but I thought we could start with some tea, Halpert.”

Jim smiled so wide that his face began to hurt. If this is what the future held, he wished it would hold forever.

“Get in here, Beasley,” he said with a toothy, whimsical grin.

Jim had cooked dinner. It was mostly ready. Because Jim was a single guy, he couldn’t cook much. Karen had taught him a few dishes. She was Italian, so he learned how to make a wonderful vodka sauce. He made that dish for Pam and was just waiting on the garlic bread to brown in the oven. 425 degrees for 11 minutes should be perfect.

Conversation wasn’t difficult. They talked about co-workers, what those co-workers’ reactions would be, and of course… Michael. Laughter filled the air like a plume of smoke after the selection of a new Pope. In addition to the laughter, actual smoke filled the air. The bread was burning. Both Jim and Pam rushed into the kitchen. Jim ripped open the oven and tossed the bread onto the stove. When he turned around, Pam was right behind him. Their eyes locked.

Deep down inside, they both thought about how the burnt bread was analogous to their relationship. It looked to be toast at first glance. With a little scraping off the top and a little care, the bread could be perfect. In fact, it was.

“I’m not hungry, Jim,” she said while locking eyes with him. Just at that moment, almost as designed by fate, the song changed.

As the chorus rang out, Jim reached down and slid his index finger just beyond the ridge in her chin. He brought her mouth closer to his. Passion fills the room and Jim’s pants.

She feels his boner on her leg. Buddy,,, it was big.

They wrestled each others shirt and pants off. Jim looked down and saw Pam in her underwear for the first time. Crotchless. Incredible. They made love until the wee hours of the morning. Sadly, Jim came early the first time, but he was fine the next 3. Good even. Props. They’ll have plenty of chances to get it right. They won’t mind the practice either. Lest we forget, practice makes perfect…even in the bedroom.