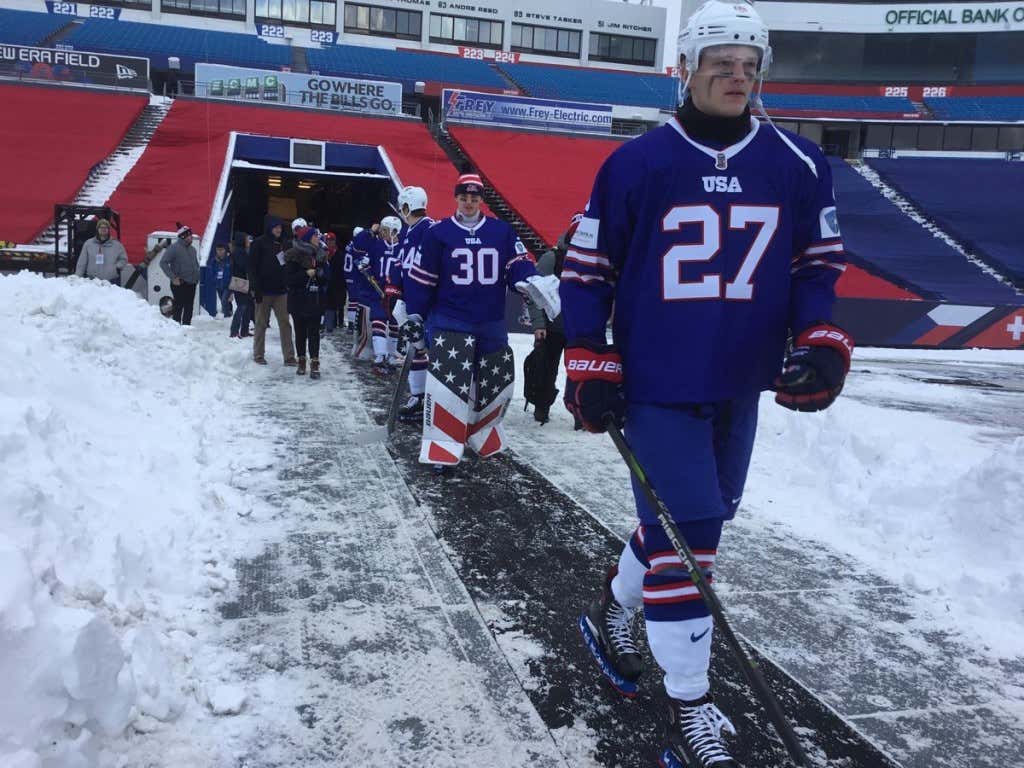 Year in and year out, USA vs Canada at the World Juniors is always one of the greatest rivalries that sports has to offer. This year there will just be a little more on the line as the two teams will play the first ever outdoor game at the World Juniors and it just so happens to be a rematch of last year’s gold medal game. And according to Vegas, it looks like Canada will have the edge to win the rematch today as 1.5 goal favorites.

This makes sense considering a few things. 1) USA had a game at 8pm last night against Slovakia, which of course ended up being a disastrous loss. Canada had the whole day off to prepare for the game today. And 2) the weather for this game is going to turn this game into a defensive battle more than anything. Here’s what we’re looking like in Buffalo today.

Team USA came to the World Juniors with the deepest and most dynamic forward group in the tournament. But when you’re playing in under 20-degree weather with some possible snow showers, that’s going to effect the game offensively and slow everything down. Which is why I think I’d take a look at UNDER 6.5 on the total.

Now I’m not making any pre-game excuses for Team USA. All I’m saying is that the cards are stacked against them right now. But they desperately need to bounce back today after losing to Slovakia last night. Anything better than a regulation loss today will be okay but you don’t want to head into that game against Finland on Sunday needing points. Hopefully Team USA has a Mike Eruzione on their roster to rally the boys up for this tilt. So without further ado…

And with Kailer Yamamoto’s overkill eyeblack, we’re officially off. Let’s get it, boys.

A few minutes into the first period and Cale Makar gets Canada on the board first on the powerplay.

Keep in mind that this is Jake Oettinger’s first start of the tournament. So naturally it’s going to take him a little time to get settled in here and he also has to combine that with tracking the puck outdoors. He’ll settle in as the game goes on but yeah, that’s one he’d probably like to have back. Great shot from Makar though.

The snow is coming down in Buffalo. Obviously this is gonna have a big impact on the puck movement out there. This game should turn into a shoot first, pass never kind of game. Last thing you want to do in these conditions is get caught trying to make one too many passes, the puck getting caught up in the snow and a break going the other end of the ice.

Speaking of “shoot first”, Dillon Dube apparently knows the rules and sniped the tits off of Jake Oettinger to put the Canadians up 2-0.

With authority too. Back bar and out. That’s 2 powerplay goals now for Team Canada on 2 powerplay opportunities. If Team USA has any chance of getting back in this game, they need to stay the hell out of the penalty box. Scoring 3 goals against Carter Hart is going to be hard enough as is.

The snow is really coming down right now and it’s having a huge impact on the game. Neither team really able to get anything going. The puck is crawling across the ice and taking really weird bounces off of sticks. I’m sure that’s a combination of snow on the ice and cold hands. Either way, it’s less than ideal out there right now and the game is suffering because of it.

The idea of an outdoor game was fun at first. But when you see how much shit weather can change the game… well I just hope this is the last World Juniors outdoor game we ever see. The tournament is way too short to waste away a game like this. When you have 82 games to play with like the NHL regular season, you can afford to throw one of these out there. When you only play 4 games in group play at the WJC, it’s just not worth it. Not an excuse or anything for Team USA being down 2-0. That blame gets placed on taking unnecessary penalties early in the game. But as a hockey fan, this isn’t ideal.

USA caught a huge break from the refs and got a 5v3 powerplay. If you can’t score with a 2-man advantage, you usually don’t end up winning the game. Luckily for the Americans, Big Daddy Kieffer Bellows was there to give the boys life and get USA on the board with this massive clapper.

Great vision by Mittelstadt to find Bellows right there and great patience by Bellows to hesitate a bit before letting that one rip. It was 2-1 at the time but USA was “controlling” most of the game that period and this was finally the momentum breaker they were looking for. Unfortunately, this US team has had an absolutely awful 24 hours of controlling momentum and just a minute 12 seconds later, Canada got the lead back to 2.

Just a total shit show in front of the net. Puck squirts out to Jake Bean at the point and he just gets this one on net. Might have tipped off of Boris Katchouk and it’s in the back of the net. 3-1 Canada.

Heading into the 3rd period down 2-1 seemed like a manageable situation for Team USA to be in. Down 3-1 and needing to score 4 goals against Carter Hart to win this game? Yikes. Not likely.

Well looks like Maxime Comtois is public enemy #1. That piece of French Canadian shit runs Ryan Lindgren into the boards from behind and somehow this is only a 2-minute minor.

You get a 2-minute minor in the IIHF for being a skater and retrieving your goalie’s stick for him. How this hit is penalized the same way is baffling to say the least. You want to make hockey a safer game? Call this shit a 5-minute major at the very least. Either way, Comtois goes to the box and then it’s Scott Perunovich on the ensuing powerplay to get the Americans back to within 1.

That Comtois hit could very easily be a game changer that gets Team USA back into this one. If they end up tying this game, I need to send the kid a bottle of whisky or something. His being a piece of shit inspiring the boys to a comeback is the best gift he could have ever given me.

AND JUST LIKE THAT, IT’S CASEY MITTELSTADT TO BRADY TKACHUK TO TIE THIS GAME UP AT 3.

Let’s fucking gooooooooo. Casey Mittelstadt with his 3rd assist of the day. Kid is an American Hero. Maxime Comtois is a piece of shit.

And as if 60 minutes of hockey in blizzard conditions wasn’t enough, this game is heading to overtime. Unbelievable comeback for Team USA already. Putting 3 goals in against Carter Hart is no joke. I said in the beginning of the day that Team USA just really needed to avoid a regulation loss today. They’ve successfully done that and now we have overtime.

Unfortunately there were no goals scored in overtime. All we found out is that Brady Tkachuk is a huge fan of “Crazy Train”

And apparently PFT Commenter is a big time Canada guy.

So now, just like the gold medal game from a year ago, this game is heading to a shootout. Goddamn do I miss Troy Terry right now.

LET’S MOTHER FUCKING GOOOOOOO. Just like last year in the Gold Medal game, Canada can’t beat USA in the shootout and it’s Kieffer Bellows and Brady Tkachuk getting the goals for the Americans as Canada goes scoreless in 4 attempts.

And then Brady Tkachuk goes top bunk on Carter Hart which ends up being the dagger.

Oettinger was incredible in between the pipes after that first period and he stopped all 4 shots in the tournament. Just an unbelievable comeback out of this group. Down 2-goals heading into the 3rd period playing in absolutely ridiculous weather conditions. They sack up and get the win. Now they’re sitting pretty for the quarterfinals.

Thanks for following along everybody. Love you all.