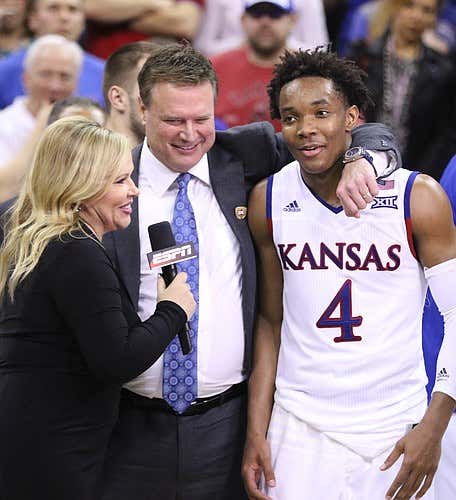 The Big 12 is off to yet another incredible season. By all metrics this has been the best conference in basketball for a couple of years now as there simply are no easy games. To me that’s the difference when looking at a league like this vs the ACC. You know you’re going to get a win against Pittsburgh if you’re in the ACC. You know you’re going to beat Boston College at home. In the Big 12, the ‘easiest’ road win this year is supposed to be at Hilton Coliseum. There’s nothing easy about winning at Hilton. Life is good in the Big 12 right now though. You have a couple national title contenders. You have the most exciting player in college basketball since Jimmer. You have 10 teams that can compete night in and night out.

Can anyone slow down Trae Young?

There’s no doubting Trae Young is the early and heavy National Player of the Year favorite with the way he ran through the nonconference. As I mentioned earlier he’s the most exciting player college basketball has had since Jimmer, meaning you need to tune in to watch him play. That said, I wonder if he’ll get slowed down in the Big 12. There are two things to remember here. Trae Young/Oklahoma have yet to play a road game on campus, something they’ll see 9 of during conference play. How will he handle the first time playing on the road? The second thing is each team gets to see him twice. Right now teams are throwing gameplans together trying to figure him out, the Big 12 has a chance to play him once and get him on the way back. I’ll be curious to see what his splits are from first time playing a team to second time. Regardless, he’s an absolutely awesome player and I highly suggest watching if for some reason you haven’t yet.

Will Kansas set the record?

If Kansas wins the regular season Big 12 title this year they will break the record for most consecutive conference titles set by UCLA during the Wooden era. I know it’s said every year, but this truly feels like the year where someone could slip them up. The league is deep and you have a chance to catch Kansas with more road losses. If Trae Young stays as hot as he is or West Virginia picks up a game somewhere or TCU stays under the radar but keeps winning, we could see this ending. Now, it’s a little unfair because a tie still ends up counting as a championship and that’s what I think will happen this year. It feels like there will be a couple of teams as 12-6 when it’s all said and done and Kansas will be one of them.

Just how many teams get in the NCAA Tournament?

We’ve never seen a conference get 80% of the league into the NCAA Tournament. That very well could happen this year with the Big 12. One big day to watch is the SEC/Big 12 Challenge. Most of the teams playing will be close to the bubble – in both leagues. If the Big 12 can get wins there that could solidify an extra bid, getting them to eight. As I mentioned earlier, you expect this conference to beat each other up, getting quality wins but more importantly the losses won’t hurt like they will in other leagues. If Cal catches someone in the Pac-12 that’s a bad loss. Same with Pitt/GT/BC in the ACC. Same with Rutgers in the Big 10. You’re getting my point. Regardless, it’s worth watching if they can put 8 teams in.

I think Texas Tech is about to be a very relevant and consistent program. I trust Chris Beard that much and I think he’s there for the longhaul. Shit, he walked away from living in Vegas and coaching there to go to Lubbock, Texas and take over a program that’s been an afterthought. When you look at the Red Raiders they are a mix of seniors and freshmen in the rotation. They are currently sitting at 11-1 with the lone loss coming to Seton Hall in a semi-away game. They have wins over Nevada and Northwestern. More importantly they have one of the best defenses in the country (sixth in AdjD). Can Beard find the right mix going forward to keep them as a top-6 seed in the NCAA Tournament and set them up for next year with the freshmen group?

What is West Virginia’s Peak?

We’ve seen the best of West Virginia – beating Virginia at home and coming from behind in a crazy game against Missouri. We’ve seen the worst of West Virginia – the first game of the season getting run of the gym by Texas A&M. That said, they have help on the way in Esa Ahmad, who is someone in the halfcourt that can provide a scoring threat and help to Jevon Carter. I think this team is capable of making the Final Four, but the nonconference was a weird slate. They played 4 top-100 teams, but then just played 1 team ranked from 100-228. If West Virginia can continue to get 40% shooting from Carter and Bolden with Ahamad coming back and not missing a beat, they could end the Kansas streak.