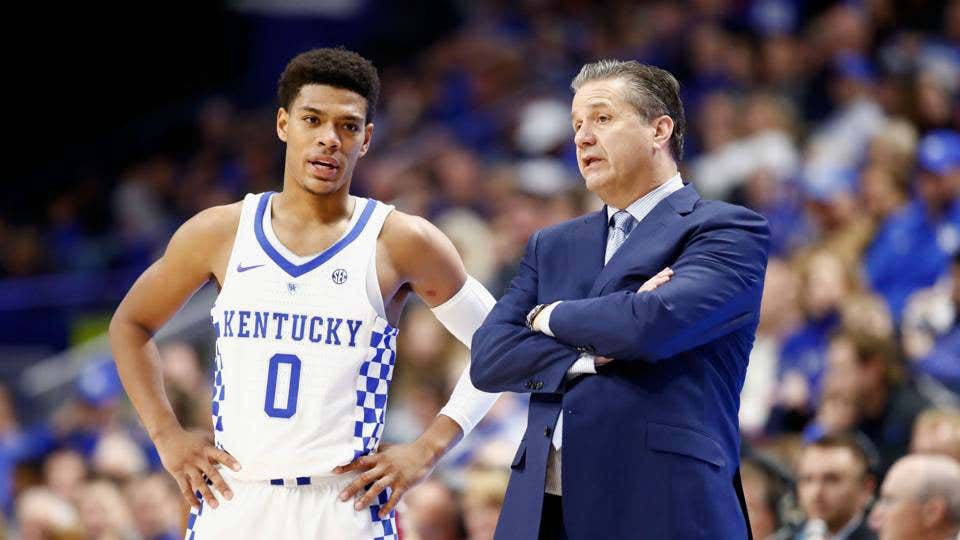 One of the two best rivalries in the game plays today at 1pm – which is a whole different story. Besides the weird timing of the game, it’s one of the few times I can remember a real lack of buzz about the two programs. Louisville is down from expectations, even after the Pitino firing and loss of Brian Bowen and Kentucky hasn’t lived up to the billing yet this year as well. Both have weird nonconference resumes and this is the last chance for Louisville to get a great nonconference win while Kentucky just has this game and then a trip to West Virginia in January.

The general feel about these two teams right now is that no one truly knows just how good or bad they are. They’ve been wildly inconsistent while showing flashes of both sides of the good/bad argument. We’ll start with Louisville. The Cardinals – as mentioned before – had one of the most tumultuous offseasons in college basketball history having to fire the head coach and AD within a week of the start of the season. I’ll give David Padgett credit though, he was able to put together a quality staff and has actually done a decent job pending the circumstances. On top of that they lost Brian Bowen – a guy who was likely to start or at the minimum be in the rotation and something the staff (including Padgett) had spent the offseason putting sets in for.

Louisville has been playing a similar style to what we’re used to seeing. They play physical. They have a plethora of bigs. They ugly the game up. They sometimes look like they have no idea how to score, yet they find ways to win. There’s one big, glaring difference though in this team compared to others. This team can’t grab a defensive rebound to save their lives. They currently rank 274th in defensive rebounding percentage. This is a team that plays five guys over 6’7″, which is just a staggering number to see. The problem here is a couple of things. First, they go to block every shot, which is fine because that’s what Louisville does. The problem with that though is when Anas Mahmoud goes to block a shot, Ray Spalding gets out of position because he’s rotating over to do the same thing, leaving his guy open for the weakside rebound. The other part here is they don’t have that guy that they’ve had in the past that has size and girth. They need someone like a Montrezl Harrell or a Chinanu Onuaku to help clear the lane.

One thing Louisville needs to do in this game is hit outside shots. If they don’t win the 3-point battle against Kentucky, it’s tough to see them winning this game. Last year, Quentin Snider was able to attack on high ball screens and get to the high post for open jumpers or get all the way to the lane. That’s part of what happens with Kentucky teams early in the season. These freshmen guards typically have trouble adjusting defensively to high ball screens and give up clean looks early as they learn the Calipari defensive scheme. If Kentucky continues to play man (more on that in a second), Snider has to have a similar game as to what he did last year. Snider finished last year’s game with 23 points and 5 assists while Deng Adel finished with 17 and 5 rebounds. If you’re Louisville that is something you can hang your hat on for this year as the two best players are back for another game.

Speaking of Kentucky’s defense. It’s time to give up the man to man as they currently play it. It’s not working. Yes, they are ranked 20th on KenPom in AdjD, but watch the game and you can see just how lost they get defensively. High ball screen, high cross screens and high motion have been killer for Kentucky trying to defend. They get out of position and the guards are really struggling on ball screens. I know Calipari hates zone – he’s played a little 2-3 so far this year – but it’s time to implement a full time zone. What Kentucky really should do is  play a 1-2-2 3/4 court trap zone. This team is full of length and athletes, so take advantage of that. Let a guy like Shai Gilgeous-Alexander run around and try and trap using his length. Let Nick Richards stay back and protect the rim. Let guys like Knox and Diallo trap at halfcourt. That’s my question for what does Kentucky do today. They need to run zone and force Louisville to beat them from the outside and do that with shading on McMahon when he’s in the game and guys like V.J. King.

Offensively, I’ve said it last week and it holds true this week even more. They need to get Hami Diallo and Quade Green open looks from the outside early and need them to go in. When Green and Diallo are hitting outside shots the lane opens up for Kevin Knox where he’s at his best. Against Louisville, who struggles grabbing rebounds, you want that lane open for Knox to drive, Richards and Washington to crash the offensive glass for easy putbacks. That’s how Kentucky is going to win this game. Last week against UCLA, Green/Diallo combined to go 1-for-9 from the 3-point line and the offense look cluttered. They also need to take care of the ball – which is just an obvious statement against Louisville. Kentucky ranks 253rd in turnover percentage and most of that has fallen on Gilgeous-Alexander, Washington, Knox and Green. Louisville is going to try and speed these guys up.

This game typically features someone random going off. A few years ago it was Josh Harrellson’s breakout game. Last year it was Snider. This year it feels like it’ll be someone like Wenyen Gabriel for Kentucky or Ryan McMahon from Louisville. Keep an eye on someone coming off the bench for one of these teams and getting in a rhythm early. Either way this line feels a little high – even with the game at Rupp Arena. Kentucky hasn’t shown anything yet to make you feel great about blowing out a team that can really force turnovers and ugly the game up.