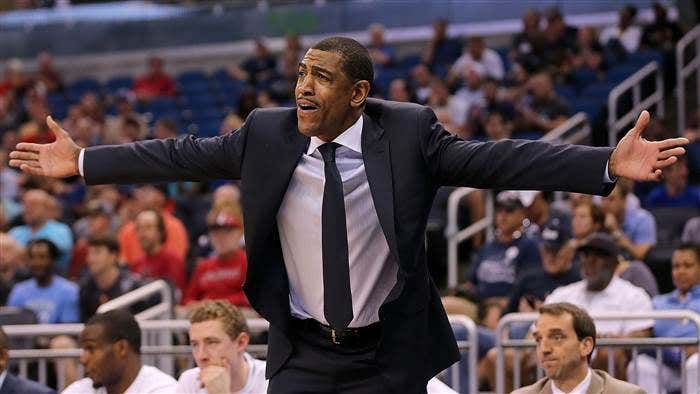 Listen, there’s no doubting what UConn has done since the late 90s is downright impressive. Jim Calhoun is one of the greatest coaches ever for the mere fact he was able to make Storrs, Connecticut a hotbed for basketball and the recruits he was able to get to come there. However, this year? UConn is irrelevant. That’s the only way to put it.

That’s something that shouldn’t be said about UConn basketball.

In fact outside of the title run in 2014, UConn basketball has been irrelevant under Kevin Ollie. Now, not all of that is on Ollie, who I’m not going to say is a great coach. But, he has dealt with injuries, especially last year. He also had to deal with replacing four starters from that same national championship team, including Shabazz Napier who flat out won the thing for him. So what the hell has happened?

First, you have to look at the offense. Take out the injury to Alterique Gilbert – a fine player, but he’s not a program changing player. Not when you have Jalen Adams on the roster. This offense is putrid. In fact it grades out as poor per Synergy scoring just .831 points per possession – including all transition points. Hell, they aren’t even good in transition (more on that later) as they rank poor there as well. There are currently two players in the rotation that are ranking above average on the offensive side of that ball. That is Terry Larrier and Christian Vital. Now this isn’t necessarily completely on Ollie as the players do have to execute and still play the game, but do yourself a favor and really watch a UConn game. There’s absolutely 0 offensive scheme. There’s no sets. They look lost any time a zone appears (seriously go watch that Syracuse game again). They have no idea what to do besides try and beat people off the dribble and get to the rim or kick from there.

If Synergy isn’t your cup of tea – where they rank in the 11th percentile nationally on offense, here are some other rankings and stats for you. 172nd in AdjO on KenPom. 278th in the country in points per games, tied with the mighty Central Connecticut team. 302nd in 3-point percentage. 299th in 2pt percentage. You’re starting to get the point I think, so I’ll just stop listing big numbers now. Let’s just take a look at some of the offensive ‘scheme’ here. They ran the same set against Auburn numerous times in a row to start the game and frankly it’s as basic as it looks. They’d send a big (in this case Cobb) to the post and look for an entry. When that wasn’t there it was a cross screen on one side and a circle curl on the other. After that a flare screen to try and find an open three. That’s it. That’s the offensive set they ran against Auburn time and time again.

Now, for this year, on top of that poor offense, Ollie and the Huskies don’t necessarily have a great defense to fall back on. That was the calling card every year and truthfully Ollie is a strong defensive coach. However this year he has his worst defensive team, ranking 77th in KenPom and in the 37th percentile on Synergy – which is enough for an ‘average’ ranking. The problem is they need that defense to be above average in order to have any form of success.

Along with that, this is where the easy buckets are getting away from them. In the past UConn created easy points by running off of blocked shots that stayed in bounds and forcing steals. This year? 203rd in steal percentage and 111th in block percentage. This is by the far the lowest they’ve had in terms of blocks as they’ve been 8th, 15th, 11th and 13th the last four years. This is where we’re seeing UConn really struggle to get points. They rank in the 8th percentile nationally in points per possession while in transition. The other part of this is simply roster makeup. Who on this team can go finish outside of Adams and Larrier? Where is the explosive player that UConn notoriously always had that could just yam on someones head?  They go into the lane soft and typically finish at the rim soft. They aren’t trying to go through contact or finish with some force, it’s all about finesse.

This is where Ollie supporters can stay they are starting players they shouldn’t have to due to transfers. My point here is, where is Ollie’s ability to develop a player over the course of the season? One of these guys can’t step up? Eric Cobb had a year in the system with a redshirt, where was that development?

It’s going to be a long year for UConn fans. The top of the AAC is better than it has been before with the addition of Wichita State and the continued growth of SMU. This isn’t a NCAA Tournament team and you’re running out of time here. Adams and Larrier are already juniors. There’s not that much help currently coming as UConn has just the 32nd best recruiting class for next year as of this moment. That means you need Ollie to start developing these guys and doing it fast.

I’ve said it before I hate calling for people’s jobs because that’s their livelihood and you don’t want to be the idiot fucking up someone’s life. However, Ollie isn’t made to be a head coach at UConn. He’s a perfect assistant coach with an emphasis on defense and recruiting. I’d be surprised to see UConn let him go, even if they miss the NCAA Tournament again, simply because UConn is loyal. That said if they were to let him go, they should make calls to the following in order:

TBD: Rick Pitino (pending any sanctions he may have)