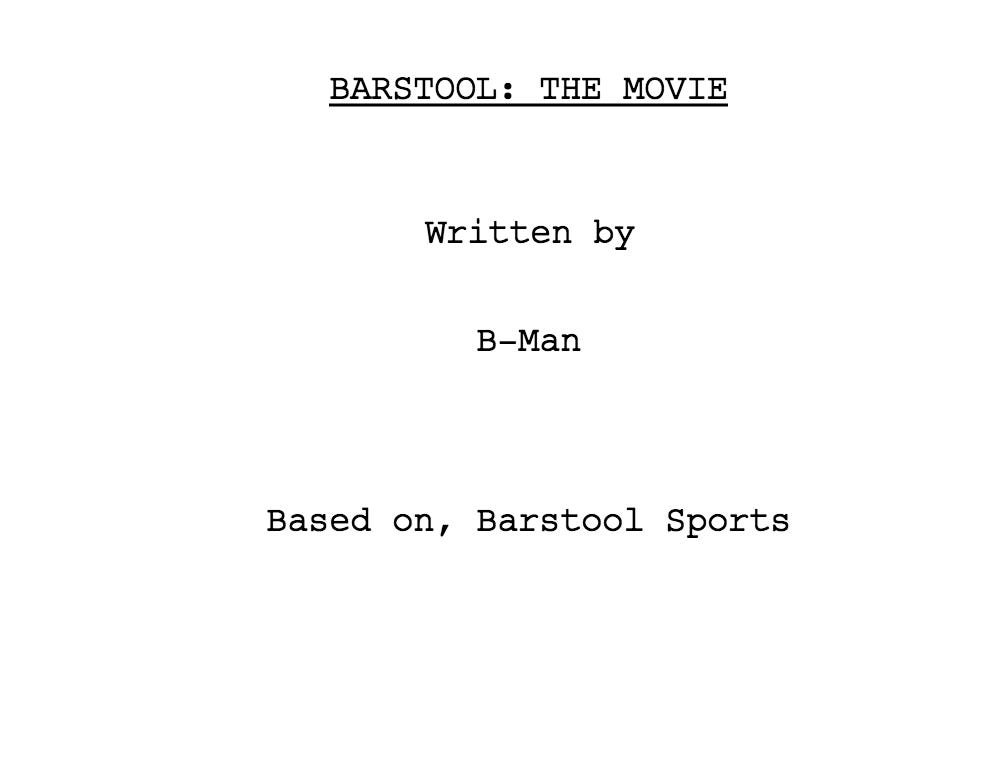 So this dude hit me up last year asking if he could write a script for Barstool: The Movie. I said yeah, sure, send it over and I’ll read it, whatever.  Just don’t like dedicate your life to it because I can’t guarantee Peter Chernin will throw a production team behind it and turn it into a feature film starring Melissa McCarthy or something.  We get stuff like this all the time, figured I’d get some shitty 4 page email “script” back or more likely never hear from him again.

Oh man was I wrong.

I’m a screenwriter. I want to write a script that attaches to the Barstool brand (started a blackout script a couple years ago – but that trend died off quickly).

I know Barstool is all about expanding it’s brand. So I wanna get the first “Barstool Movie” made. Something akin to National Lampoon or American Pie brand…

I will write you a script (for free) that can be shot cheap ($1 to $2m budget). You base a web series around the casting and production of it and you build in an audience. If the thing grosses even $20m (it’ll do that opening weekend), it’s a MONSTER hit and Stooliewood is off and running.

I have some script ideas specifically for the stool – some I think would be fantastic, with built-in cameos for the likes of you (tuxedo only, obviously), Danny Scoots, and the rest.

At the very worst, I bet you’ll laugh your ass off at a sample script.

Yeah I’d read a sample for sure. Wouldn’t get your hopes up for anything other than that but I will definitely check it out.

Kind of forgot about it, and then out of the blue last week:

Here it is. The long awaited script of Barstool: The Movie, a true masterpiece.

Here it is indeed.  A 45 page epic odyssey of Dave Portnoy coming out of a coma and getting the band back together to save The Stool.  Embedded below or hit the link for the PDF.

In an astonishing twist –

Turns out someone else, with the same last name in the email address, is also working on a Barstool script. That’s right folks – we’ve gone from no Barstool movie in the works to an open bidding war on scripts. #TheCherninEffect is real.