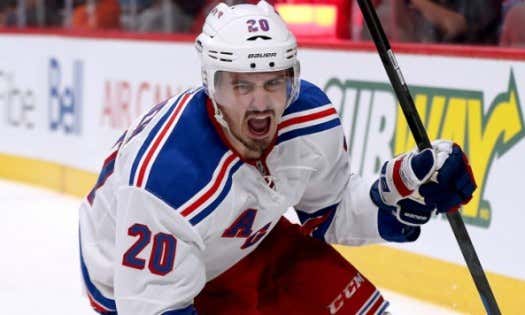 First, the good news. With backup Ondrej Pavelec between the pipes against Ovechkin & Co. the Blueshirts played a responsible, sound game & knocked off the Capitals in the skills competition. Pavs has been outstanding in his last two starts, racking up 74 saves on 75 shots. He’s gotten just one goal of support in those outings but the Blueshirts managed to take 3 of 4 points thanks to yet another Benoit Allaire success story. It was a little strange to see Hank not get the nod after a few days off for a home tilt vs Washington. But Pavelec has proven lately that NY can have just as much confidence in him as they did in Raanta & Talbot over the past couple years.

Now, the bad news. After losing Jesper Fast for a couple weeks to a quad injury on Saturday, Chris Kreider is now sidelined indefinitely after mysteriously not returning for last night’s second period. As it turns out, it’s a blood clot in his arm. Sounds like some serious shit & there’s still tests to be done for an official diagnosis, but Larry Brooks compared it to a similar situation Tampa Bay faced a couple seasons ago with Andrei Vasilevskiy. The Bolts backup netminder (at the time) missed 2 months after surgery so that’s a fair timeframe to assume for Kreids, but everything is speculation for now.

If there’s one position the Rangers can afford to sustain some damage it’s on the wing. I assume the Buchnevich 4th line experiment will be over & preseason standout Vinni Lettieri gets to make his NHL debut. The college FA was on the bubble to make the team out of camp and has impressed in his first AHL season with 21 points in 31 contests. Lettieri should get at least 5 games (which is around when Fast is expected to return) to make his mark with the big club – including the Winter Classic which is a pretty cool event to have as your second career appearance. He could see some second-unit PP time too as the only other right-handed forward besides Zibanejad.

That’s not to say the Blueshirts don’t lose a lot without Kreider on the ice. He’s on close to a 50-point pace & had 5 in his last 6 heading into last night. He leads the team in PPG (with Mika) & is behind only Nash in shots. Also, Kreider pretty much represents all of the Rangers net-front presence & physicality. He leads the team in hits & the only other forward who throws the body nearly as much is also out (Fast). JT Miller & Jimmy Vesey are the only two realistic options to fill some of the physical void Kreid’s absence leaves. This should be an especially good opportunity for Vesey who’s skated well in his second year & has begun to chip in more offensively. The Harvard kid should be locked into steady top-9 ice time for the foreseeable future.

Again, we still have to wait for the official diagnosis – but for as great as Kreider can be this is not catastrophic. If two months is the time frame, that still leaves a month of regular season to get his legs back for the postseason. If he’s determined to be out for any longer than that, any thought of shipping off UFA’s Nash or Grabner at the deadline are out the window (assuming the Blueshirts don’t implode by then). For now though, players will have to step up – but the Rangers have the wing depth to do just that.