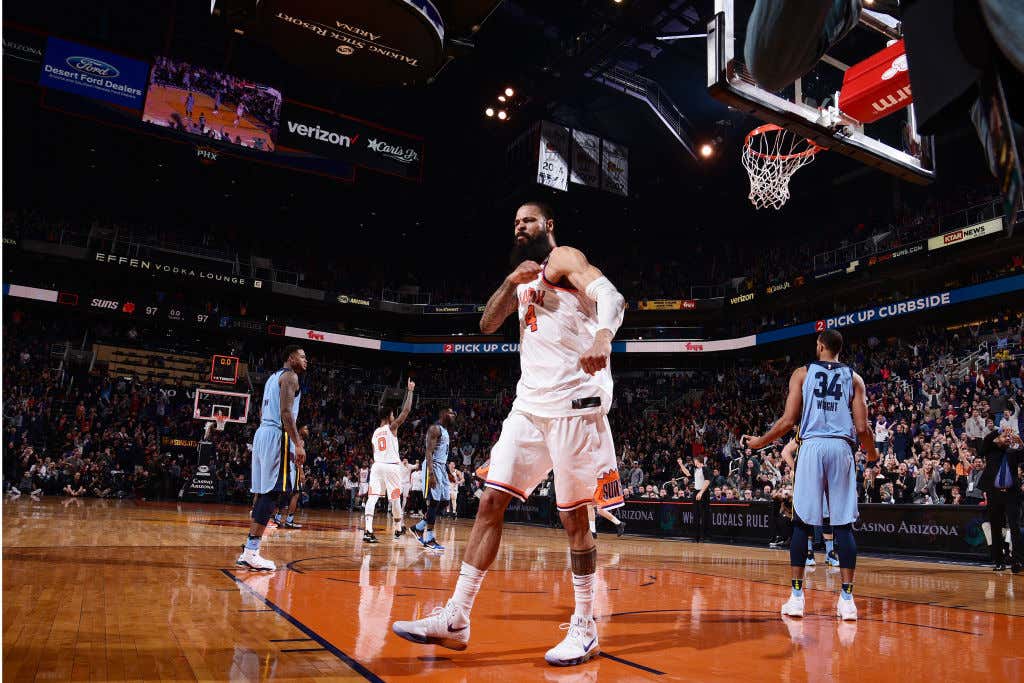 Hello and welcome to another edition of Last Night In The NBA where we catch you up on everything that happened the night before in the Association. I really hope you aren’t reading this blog at work, but if you are, I have good news for you. There were 8 total games last night which means I have a shit ton of basketball highlights to show yo which means you won’t need to do anything at work for quite some time. It’s no big deal really, you don’t have to get all emotional about it, just keep scrolling. Here’s what happened

To the outside observer this may not seem like that big of matchup. Here’s why it is. Teams 4-8 in the East are separated by just 1.5 games. When you’re that grouped together, head to head results become very important when it comes to postseason seeding. Well, IND had already trailed DET 2-1 heading into last night with basically an identical record. This was a big game for IND to at least tie the head to head matchup, but Tobias Harris and the Pistons had other ideas.

Harris came out BLAZING, dropping 21 points in the first quarter, he didn’t miss a shot, and finished with 30/6 on 10-11 shooting

It also helps when you get 21/18 from Andre Drummond, with plays that look like this

Now Reggie Jackson looks to have hurt his ankle which is never great, but considering they were also missing Avery Bradley in this game, I’d say it’s a pretty good win. Quietly DET has won 5 of 6 to rebound from their 7 game skid, and as of now hold down that 4th spot in the East.

For IND, it’s hard to win on the road when no player on your team scores more than 13 points. With only 1 quarter over 21 points, it wasn’t as if they were without Oladipo or Turner or Sabonis or Lance or anything like that. They just couldn’t score.

Just 11 shots for Oladipo and 9 shots for Turner seems like a problem. Not one starter had more than 3 rebounds! DET only had 50/35% splits so I found this interesting.

There hasn’t been a better team in the East over the last 13ish games than TOR, and while they haven’t really played nearly as many games BOS and a few less than CLE, you can’t discredit how well they had been playing on both ends. They own the best point differential in the East, and have been absolutely crushing December. That is why it totally makes sense that they would lose to DAL.

As poor as their record is, 8 of their 10 wins have come at home, and when you get the sort of balanced production that the Mavs got, anything is possible!

And how about the closer JJ Barea! 20 points off the bench and this layup to seal it.

For TOR, if you’re going to beat them, it’s probably going to come on the road. They are 12-1 at home compared to 11-8 on the road, and on nights where DeRozan goes 3-16, that makes it tough.

Serge Ibaka had his opportunities late with a couple jumpers that didn’t fall, and he ended the night 4-13 as well. As a team with 33/29% splits I think you can just chalk this up to an off night for a team that hasn’t really had a lot of those.

Man were the Heat and their fans happy that some if their guys came back. With Dragic and Whiteside back in the lineup the Heat, who are 7-3 over their lat 10, now have a nice little 0.5 game lead over the Knicks for the 8th spot in the East.

One of the pleasant surprises on the season for Heat fans has to be how well Wayne Ellington is shooting the basketball. Every game you look at he has like 5 or 6 threes, and last night was no different

And once this game got to the fourth, the Heat pounced, scoring 39 points

For ORL, yeah you’re still losing, but I have good news! If Hezonja keeps playing like this

Someone will give you like a second rounder for him at the deadline, so there’s that!

Look at the Bulls go! Winners of 8 of their last 10, this was a nice bounce back win against an up and coming MIL team after dropping their last two against CLE/BOS. Can they turn this around and actually make the playoffs? That I’m not so sure about, considering they are 6.5 games out, but man do they play exciting basketball despite their record. The development of Kris Dunn has been huge for them, and he really looks like the caliber of player that warranted his draft slot

I would also venture to say THIS is the Mirotic that Bulls fans have always wanted. Since coming back from a broken face, he’s been the face of this run and has been fantastic

A nice 32 point fourth sealed the deal for CHI, and while they may be killing their lottery odds, I think they’d trade that in for some positive development, and this win came without Baby Dirk doing a damn thing!

For MIL, as a current 7 seed and just 2 games over .500, is it fair to say they are underachieving just a bit? I’m not sure you can call this a bad loss given how well CHI is playing, but when you get 28 from Giannis

and a solid 18/6 from Brodgon off the bench

you probably expect to win at home. But look they are a young team figuring it out, and it’s no surprise they are struggling a bit when you see they have a negative point differential. As long and as talented as they are, they’re giving up over 105 a night, which is average at best . In fact it’s basically the middle of all the teams in the East. They were never going to win their division, but I think being 1.5 games behind DET is a bit of a surprise.

It’s pretty hard to beat SA when they shoot 51% from the floor and turn it over just 12 times, especially when you get the type of production they got from their starting unit. Kawhi led with 21, but LMA had 20 on 7-17,

The Spurs are now 16-2 at home, and with HOU sliding with 3 straight losses, now sit just 2.5 back for that 2nd seed in the West. They give up the fewest points in the NBA, and will have a rested Kawhi moving forward. As always, don’t sleep on SA

For BKN, they’re 3-7 over their last 10 which isn’t great, but they did get solid nights from LeVert and rookie Jarrett Allen

hard not to root for a kid with such a strong afro game.

Winners of their last three, the Nuggets are starting to look like themselves again. Obviously having Jokic back in the lineup helps wiuth that, and he was his usual self with 13/7/5 despite his poor shooting

but the real story continues to be their guard play. Led by Jamal Murray and his 22 on 9-15

it’s fair to say he is developing into the type of player this team really needs him to be to compliment Jokic. The same can be said for Garry Harris who had 15/5 on 6-12 shooting. No one really knew if this Murray at PG experiment would work, but I think when this team has been healthy, it’s been fine. The Nuggets are now 12-3 at home and really needed this win so they could get on the board in the head to head matchup with UTA.

For UTA, tough to win in a place like the Pepsi Center when you have 32/28% splits and can’t break 90 points. At least Donovan Mitchell did some cool things!

Their problem continues to be their struggles on the road, now just 3-14 on the season. They sit 3 games behind the current 8 seed in the West, and if they can’t figure out a way to win on the road, they’re headed for the lottery, but that’s sort of what people expected anyway so no big deal. Also things are obviously a little tougher with no Gobert out there.

The Suns best player returned after missing what felt like a million games, and he looks as good as he did the day he left. I mean if I’m going to waste hours of my life watching Suns basketball, at least it makes me feel better to know he’s back and is going to do ridiculous things on the basketball court. In all honesty though, this wasn’t that great of game, the Suns turned it over 19 times and nobody besides Warren and Booker did anything. But none of that matters. What matters is how they won the game. What a great play/throw/finish

Great knowledge of the rule that you can interfere with the ball on an inbounds pass, and while Chandler 1000000000000% pushed off, I respect the officials for letting that go. Sort of reminded me of the alley-oop Doc Rivers drew up for KG to steal a game way back when. This may be the best play of Dragan Benders career.

Speaking of teams that should set their players free, the Clippers blew out SAC at home! Way to go! No thanks to the starters though, they were mostly trash outsiude of Jamil Wilson

instead it was the Montrezl Harrell and Lou Williams show

For SAC, obviously they had no Fox, and the players that they did have pretty much stunk outside of WCS who had 17/7/3/4 on 8-10 shooting

They kept it close to start, but I’d say that 41-23 second quarter did them in.

And that’s it! You’re now all caught up on everything that happened last night in the NBA. We have 10 more games tonight including BOS/CHA, DEN/MIN, NYK/CHI, and TOR/OKC so it should be a fun Wednesday night. As always if you can’t watch just check back here tomorrow and I’ll fill you in on what you missed.