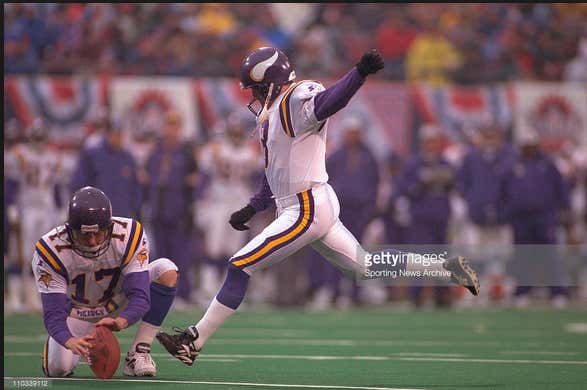 Helped by an on-side kick the Minnesota Vikings rally to beat the New York Giants 23-22 on a cold rainy afternoon at the Meadowlands in an NFC Wild Card Game. The Giants were in control the entire game, holding a 19-3 lead at the half. Down 22-13 with two minutes left, with 1:38 Randal Cunningham completed a 30-yard pass to Jake Reed, after the on-side kick, Eddie Murray kicked a 24-yard field goal to win the game with ten seconds left.

It was a surprising turnaround season for the New York Giants, who after three terrible seasons under Dan Reeves made the playoffs in Jim Fassel’s first season as head coach, posting a record of 10-5-1 to win the NFC East. The Giants were led by a pair of rookies on offense as wide receiver Ike Hilliard and running back Tiki Barber each had played a significant role. The Minnesota Vikings coached by Dennis Green meanwhile had their ups and downs, overcoming a late-season five-game losing streak to qualify for the playoffs as the sixth seed with a record of 9-7 after they beat the Indianapolis Colts 39-28 in the final game of the year led by Randall Cunningham. Cunningham after sitting out the 1996 season began the year as the Vikings back up quarterback but was forced into action after an injury to Brad Johnson.

The first game of the 1997 postseason at the Meadowlands kicked off at 12:30 on a Saturday with temperatures in the high 30’s with a steady frozen rain falling throughout the game. The game got off to a rough start for Randall Cunningham as two fumbles in the first quarter set up a pair of Brad Daluiso field goals to give the Giants a 6-0 lead. At the start of the second quarter, the Giants put together their best drive of the game to make it 13-0 on a touchdown pass from Danny Kanell to Aaron Pierce. The Giants later made it 16-0 following a Cunningham interception. After Eddie Murray put Minnesota on the board with a field goal Daluiso answered with his fourth field goal to give New York a 19-3 halftime lead. Early in the third quarter, the Vikings got back in the game, following a Tiki Barber fumble as LeRoy Hoard needed just one play to cash it in on a four-yard run. The Giants offense could not get anything going in the third quarter. Late in the third quarter, the Vikings began a long drive that resulted in a fourth-quarter field goal to make it 19-13. The Giants answered with their own long drive, but once again settled for a field goal by Brad Daluiso to make the score 22-13. Down by nine points with 2:03 left, the Vikings got a break when Brad Maynard shanked a punt 26 yards to set them up at midfield. The Vikings quickly went up the field, with Randall Cunningham connecting with Jake Reed on a 30-yard score to cut the deficit to 22-20 with 1:30 left. The Vikings would keep their hopes alive, as Chris Walsh recovered the on-side kick. Following the recovery, the Vikings needed several big plays, including a 21-yard completion from Cunningham to Cris Carter on third-and-four from their own 45. The Vikings then benefited from a pass interference on Philippi Sparks to get into field goal range. The Vikings would take the lead with ten seconds left on a 24-yard field goal by Eddie Murray. With just seconds left the Giants were unable to come up with the Hail Mary prayer as the Vikings won 23-22.

The Vikings would go on to lose to the San Francisco 49ers 38-22 in the Divisional Playoffs, as the Giants did miss the playoffs in each of the next two seasons.