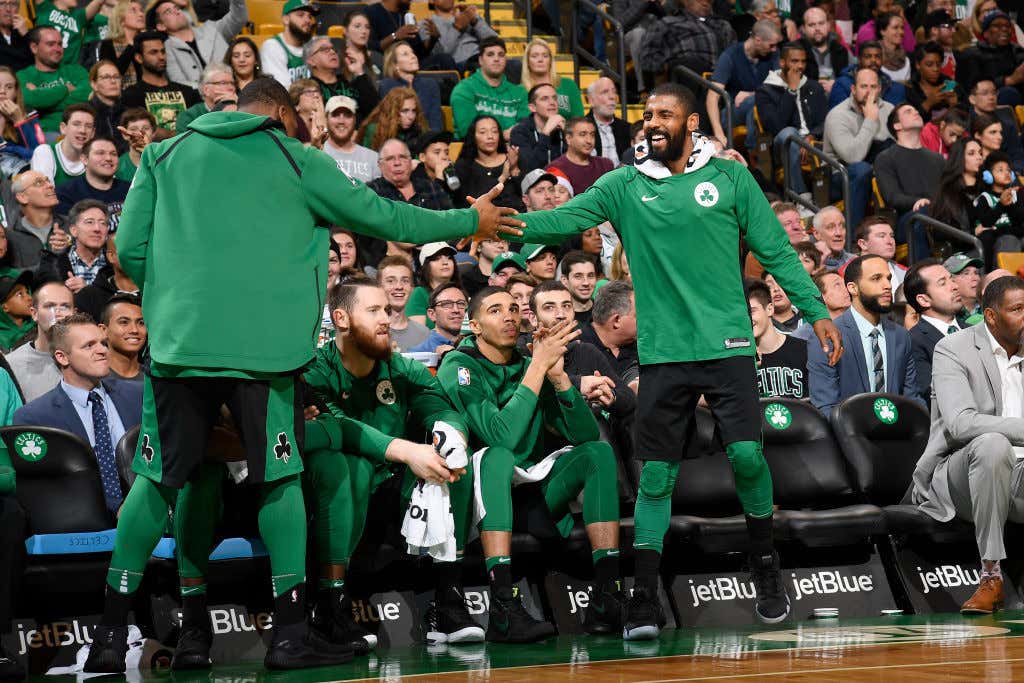 Heading into this season, that is not a headline I ever expected to type. But listen, these are not your October Chicago Bulls. They had been playing some of the best basketball in the entire conference for about the last two weeks, with their only loss being a 3 point defeat against CLE. They beat some good teams including you, NYK, MIL, and PHI. You knew going in that this was not going to be a walk in the park mostly because not only were they playing well, but even if they STUNK, the Celtics would still make it a competitive game because that’s what they do. Doesn’t matter if you’re the best or the worst don’t worry, the Celtics will not blow you out. On the season, they had just one 20+ point win, and that came on 10/24 against the Knicks.

So in a stretch where they’ve played some god awful basketball, last night felt like watching the team that got off to that 16-2 start. The finally blew someone out, and I think they needed a performance like this in front of their home crowd just to lift everybody’s spirits heading into the holidays. Lord knows they haven’t made it easy on us, and shit this game was a toss up for pretty much half of it, but the proof is in the pudding. This was one of the better performances we’ve seen on both ends, and it couldn’t have come at a better time.

– I could not care less that his 30 point streak ended, because THIS version of Kyrie Irving is 100000x better. The Celtics really needed his 25/1 with 1 TO and 59/71% splits, and I would say it was one of his better overall performances of the year so far

The creativity, the shot making, the nasty as hell crossover into that Fuck You Three at the end, the Celtics needed their big guns to step up and end the losing and poor play, and that’s what Kyrie did. Do I think it’s a coincidence that the Celts and Kyrie looked so good and he only took 15 FGA? I do not. I think the 15-19 range is where this offense truly flourishes, and not the 25-27 FGA where everyone stands and watches.

It was also great to see the Celtics finally get Kyrie some consistent off ball/screen 3PA, which to no surprise, he made. I’m glad I could help Brad with that one.

You shouldn’t just be impressed with how Kyrie played on offense, because defensively he was one of their best players in this game. Lowest defensive rating of any starter that played at least 27 minutes, and I think it can be directly correlated to just having more energy because he wasn’t taking a billion shots. Tell me this didn’t look like easy season Kyrie on the defensive end, and then tell me you wouldn’t rather have that version.

– Jaylen Brown makes me so happy. That’s the best way I can explain it. After missing the Knicks game Jaylen was not only back, but was the best version of himself

20/5/3 with 4 made threes and 69 (nice)/66% splits in 27 minutes. In watching Jaylen’s development into a consistent shooter, that’s right I said consistent, the next step we’ve seen is him make that big momentum three. There was the one from the top of the key against MIA, and then last night, especially that WIDE open one. Last year I feel like he takes his time to gather like that, and misses it. This year I have the utmost confidence in Jaylen’s shooting, whether it’s from three or from the midrange. Just as long as it’s not from the FT line, I’m good.

Quickly, there is this notion that Jaylen is an inconsistent shooter, and I don’t really get why. His October wasn’t all that great (42/33% , 1.6 3PM), but he responded with a solid November (47/43%,1.9 3PM) and is having a great December (44/56%, 1.9 3PM). From the corners, Jaylen is shooting 48% from the left and 38.9% from the right corner. You heard it on the broadcast, he’s one of like 3 dudes in the NBA that have made 13+ threes from both corners. He does all this while averaging just 11 FGA a game! It’s time people realize that Jaylen has legit taken a leap with this shot, and that this team is at his best when he is engaged and involved for 4 quarters.

– You know who played the most last night? Jayson Tatum. his 32 minutes led all players on either team, and boy did he respond with a nice 13/7/5 on 6-13 shooting

Look, I get what Ben Simmons is doing in PHI is shit not done since Lebron. His numbers are ridiculous. But his team is also 14-18 and 3 games out of the 8 spot. Jayson Tatum is making big time contributions on a team that’s 27-9. That has to mean something. The haters will say he’ll regress. They’ve been saying that for months. We’re at Christmas, and they’re still waiting

It’s seriously at the point where my brain considers it a make every time I see him go up for a shot. A very similar feeling I have with Kyrie, and had with guys like Isaiah and Ray. I am legit shocked when they miss. I can’t remember the last time I felt that way about a rookie, who hasn’t even played 50 NBA games yet. In watching Tatum though, you can see what Ainge was thinking. His 13 FGA were the second highest on the team which makes me happy, because this kid NEEDS to be in the 13-15 FGA range. He’s proved his offense is legit enough and the moment is not too big.

Surprise of the year was the 5 assists though. Highest of Tatum’s season to date.

– Who did it better, Kyrie or Terry?

Answer in the comments below!

– Anytime the Celts can win or keep it close on the boards, win the points in the paint battle by 14, be even in second chance points and fast break points, they usually find themselves in a good spot.

– A much better effort from Al against CHI. After struggling in their loss a few weeks ago, he responded with a solid 10/4/6 with 3 blocks on 50% shooting

He also did a great job at holding known Celtics killer Robin Lopez in check, he only finished with 8/4. When Horford found himself being guarded by Baby Dirk, I’m glad he realized he should be aggressive and attacked him nearly every opportunity.

– But the best big man on the Celtics was by far Daniel Theis. A 10/15 out of nowhere, I couldn’t get enough of how active he was on the offensive glass. I counted at least 3 or 4 extra possessions given to the Celtics that were a direct result of Theis’ activity.

He played 24 minutes, and at this point if he’s going to play like this, that’s where he needs to stay. Sure he fouls a lot, but he’s an international rookie he’ll figure that out. He’s got a midrange when you need a good shot, and has the energy that the second unit desperately needs. What a goddamn find my Danny.

– He shot just 4-12, but I thought this was one of Marcus’ better games. He kept his head up and attacked the basket more frequently that what we’ve seen from him in the past, and his defense was nails as usual. These are the type of Smart performances I think we would all prefer right? The ones where maybe his shot struggles, but he doesn’t play careless and out of control? He had just 1 TO in his 26 minutes, and that’s what’s most important.

– To no one’s surprise, the Celtics had trouble with Bobby Portis. He’s just one of those guys that is always going to give the Celtics problems. Top 5 current Celtics killer no question. When the Celts see him they get scared or something it’s weird, they don’t play tough. Jaylen even said it to Abby at halftime, the Celtics didn’t play with the right amount of toughness in that first half, and Bobby Portis was a big reason why.

– I feel for Semi. He missed that early dunk and he REALLY wanted to redeem himself, but to get blocked at the rim on his second attempt was tough. He wasn’t alone though, Theis missed a two handed dunk as well which is cool because that’s basically all this team does is miss close to the basket. Celtics are the 4th worst team under 10ft at 60%, and you look at their stats at the rim, they’re 7th worst at 58%. Not great!

– I’ll admit it, I was fairly concerned with how the second quarter started and the Celts were down 15-7. That same hurt came back, and it was not welcomed. Fortunately they overcame that slow start, but that had me trigged as fuck.

– Listen, in a game you’re winning by 25, and things never being a question as they entered the fourth quarter, getting 2:49 of Yabu is simply unacceptable. In what world can Abdel Nader play 12 minutes in that quarter and Yabu barely break a sweat? The people don’t just want Yabu, we NEED Yabu, so I’m going to have to ask what the hell was going on. I get that Theis was dominating, but who cares if you have to go “big”. Play Yabu at SF, he can handle it. This was the only thing missing from this good win, and unless Brad is waiting to unleash him on National TV on Christmas, I just don’t get it.

So we now turn the page to WSH on Christmas, in a game that doesn’t feel like it has the same hype as last year. Make no mistake though, WSH is very capable of coming into the Garden and stealing that game. They’re 8-9 on the road, and are coming off a game in  which they just dropped 130. If the Celts defend and have a balanced offensive approach like they did last night, it shouldn’t be a problem. This is also the first time these two teams play this year, and you know Wall/Beal & Co want to make a statement after what happened in GM7, even if the rosters are way different.

Either way, I’m just glad the Celts finally didn’t play like dogshit. Now say it with me…