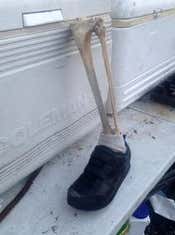 NY Times- In any other part of the world, a sneaker with a human foot washing ashore might be a terrifying discovery, enough to frighten residents and stir fears of a gruesome murder or a serial killer on the loose. But not in British Columbia, where these discoveries have become so common that they are tracked. It was the 13th foot to wash ashore since 2007.

Mr. Johns said he called the police and then used a stick to pick up what remained of the leg, carried it back to his property and locked it in his greenhouse. He worried that if it remained on the beach, it would have washed back into the ocean or attracted the bear hanging around town or an eagle from the nearby nest.

The Royal Canadian Mounted Police retrieved the remains on Friday, the authorities said, and they are being inspected by the Coroners Service of British Columbia. “We’ll try to get a DNA sample,” said Andy Watson, a spokesman for the service.

Joshua Constandinou, who owns the Cold Shoulder Cafe in Jordan River, about a half-mile from the site of the foot, said residents were not rattled by the discovery. “At the beginning, it seemed more strange, but now it happens so many times,” Mr. Constandinou said.

What a portrait of Canada. Human feet washing ashore like flotsam, coming in with the tide and buoyed by the rubber soles of New Balances and Nikes. It’s been happening so often that nobody cares anymore. Just the other day, Mr. Johns and his dog were strolling along the beach, collecting sea shells, when his dog sniffed a bone that turned out to be a fucking foot. Does he scream in terror and run back to alert the constable? Not even. Guy casually picks it up with a stick and carries it back to his greenhouse so the town bear won’t turn it into a toothpick. On the way, he sends out a smoke signal to the Royal Canadian Mounted Police, who show up a few days later because their horses were being re-shoed by the local blacksmith (who is also the town’s mailman, dentist, and bookie). Life sure moves at a different pace up north.

I’m trying to think what I would do if I found 2 human feet on the beach wearing Yeezys in my size. Is it wrong to appropriate those sneakers? I subscribe to the Native American way of life whereby every part of the animal is used. The shoes would be waterlogged as hell anyway, so their resale value would be extremely low. Imagine posting them on eBay?

“Lightly worn size 12 Yeezy Boost 350. Box missing. Slight saltwater stain on toe box. Soles yellowing a bit, otherwise in great shape. Previous owner appears to have hit the water head first when he jumped off the Seal Island Bridge into the freezing tidal waters off Nova Scotia, so the sneakers went in clean. I’d wear them myself but I’m afraid of ghosts. $500 or best offer.”