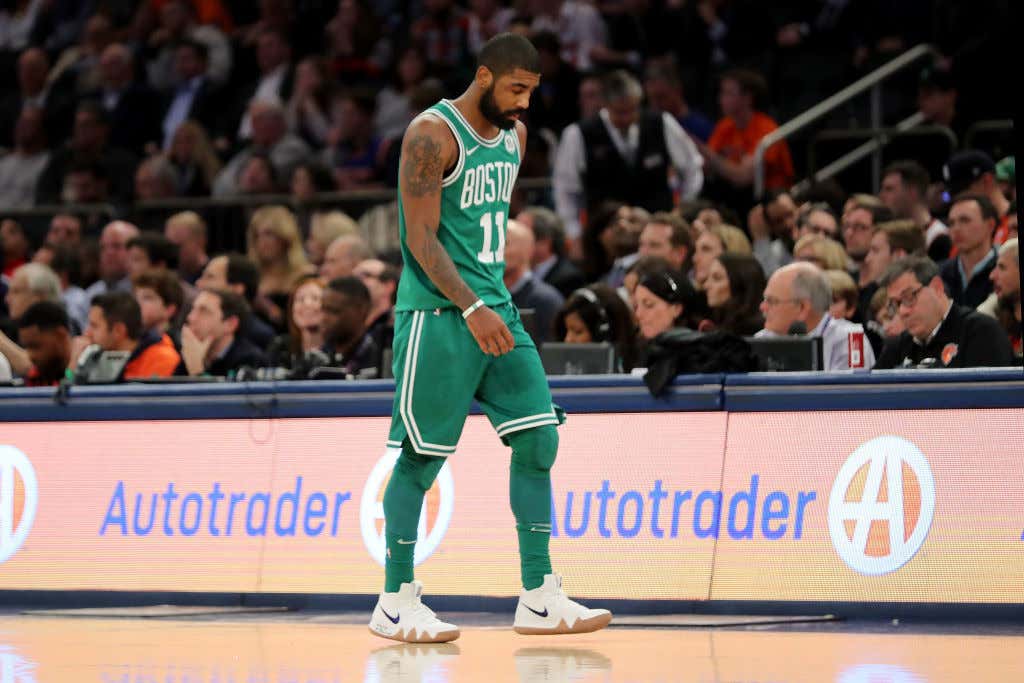 Losing to a depleted Heat team and Kelly Olynyk was painful. Giving up a career high and outlier performance to Olynyk was annoying but expected given how pumped you knew he would be to play in Boston. Losing to a Knicks team that essentially did not have Porzingis wasn’t just painful, it was nauseating. Giving up a season high to Michael Beasely was not expected and equally as annoying.

I get it, the Celtics have injuries and have played a brutal schedule and blah blah blah. Listen, a team with this type of upgraded talent should be able to beat a Knicks team that got 1 point from their best player, and a guy who sat out the entire fourth quarter. I don’t care if the Celtics played 5 days in a row, Kyrie/Tatum/Horford/Smart/Rozier/Baynes etc were all available, and yet, here we have another example of the Celtics blowing a double digit lead against a bad team and ultimately coming up short.

I get it’s December. I get things will almost certainly change once the schedule lightens up and people are back. That doesn’t mean you can’t be frustrated with what we’ve seen from this team over the last 9 games. Hell, you could argue things have been iffy for about the last month.

So look, big picture, if someone told us after opening night that this team would be 26-9 around Christmas, each and every one of us would take that in a heartbeat. At the same time, if you look closely you are starting to see trends that are a little concerning. Bad habits that are suddenly popping up. This team isn’t quite the team that was on that 70 win pace, but they also aren’t the type of team we’re seeing lately, which is a 36 win team.

We may as well get started…

– You know what they say. Big time players love playing at MSG, the ultimate stage. Well, Kyrie took that to heart, going for 32/3/4 on 12-27 shooting

The way he came out in that third quarter with 9 huge points is what helped the Celts come back and build a lead, so it’s safe to say this isn’t a competitive game without his point production. You could say Kyrie has been on a bit of a scoring tear of late, as this was his 3rd straight 30 point game, and the 5th in his last 6 games. For the month of December, he’s at 27.9/2.3/4.3 with 50/44% splits. That’s pretty damn impressive. He’s improved his points and shooting splits each month this season, which tells us he’s starting to feel more and more comfortable. I’d say that’s going to be somewhat valuable moving forward.

– You know who else played pretty well in their first game at MSG as a professional? Jayson fucking Tatum

Talk about a guy not afraid of the stage or the moment. Tatum gave us the full offensive arsenal last night and boy was it intoxicating. You had the one on one isolation to the rim with that nasty inside out reverse layup. Then he showed you he can pump fake you, settle, and knock down the open jumper. Next season Tatum will have improved court awareness and that move will become a corner three or something, but man is it smooth. And then he showed you he can make crazy tough fall away jumpers as the shot clock expires from like 25 feet because he is an offensive monster.

He finished with 17 points on 6-10 shooting, and it’s at the point now where I am legit angry that a team currently struggling to find people to score is only giving perhaps their best shooter not named Kyrie only 10 shots a game. ESPECIALLY in a game in which Jaylen was out too.

– Just like he did the first time they matched up, Horford did a great job defensively on Porginzis. Horford led the Celts with 13 contested shots and the way he defended early was a nice response given the struggles he had against Olynyk. It was his defense in the 3rd quarter (79.4 Drtg) that really helped settle the Celtics down, and allow them to start that quarter with such a good offense burst. He also led the team in assists with 5, and while he struggled from the floor at just 4-12, he was the only starter to finish with a positive net rating. To me, this was a clear example of a game in which Horford should have been more involved late. Only 2 FGA in the 4th quarter is unacceptable imo

– Another guy who did a great job on Porzingis was obviously Smart. Marcus loves guarding and shutting down Porzingis because even though he gives up like a foot of height, he knows how to play him physical in a way that for whatever reason makes Porzingis hesitant. Porzingis never really figured out that posting Smart is not a good idea, and this was a great example of the value Marcus brings. What other point guard can do that to a unicorn? Offensively Smart wasn’t all that bad either, as his shot is somewhat acceptable right now.

This was his 4th straight game in double figures, and he has 40/46% splits this month! Now he went back to shooting like a dick in this game specifically, but overall his offensive game is at a point where we can all live with it. The thing I care about most is Smart took care of the ball in his 34 minutes, with just 1 TO.

– Well I suppose we could start with that first quarter. Getting down something like 13-2 is never a great idea, and the Celts came out and just looked flat. They weren’t making shots and weren’t getting stops on the other end, and to me that’s just all about effort. 15 points and 35/14% splits is some second quarter type shit. Watching how they started this game brings me to my biggest takeaway from not only this game, but this little skid.

– It’s time to admit that the offensive strategy of having Kyrie take 25+ shots and score 30+ points is not working. Now before you get all bent out of shape, let me explain. There’s no denying that he’s the best offensive player, and naturally your best offensive player should lead you in scoring. But take a look at the last three losses and you see an interesting trend.

I know what you’re thinking. That’s because the bench sucks and this team needs offense, that’s why Kyrie is taking so many shots. Well, hold on. Look at the first quarter last night as a prime example. Kyrie spent the majority of his time with the starters, and took 9 of the 20 shots. Tatum and Horford combined to take 4. In the second quarter, Kyrie played with the second unit, but didn’t lead them in shots, Rozier did with 6.

Then look at the third quarter, what was different? The FGA were evenly distributed. Kyrie had 6, Tatum 6, and Horford 5. What was the result? The best offensive quarter of the game. Then look at the final quarter. Again, Kyrie played with mostly the starters, and led the team with 7 FGA. Tatum/Horford/Marcus combined for 7 FGA in that same quarter.

So to me, this isn’t about Kyrie having to make up scoring because he’s mostly sharing the floor with the bench unit. To me it’s a change in approach. How is this any different from earlier in the season when the Celts were missing Morris and they were winning? I can’t look past how different Kyrie’s approach was. In the first month plus, he didn’t have 1 game over 23 FGA. In fact, his first came on 12/4, and since then he’s had 4. His FGA is up 3 shots per game in December, and the result are speaking for themselves.

It is true we need Kyrie’s scoring in order to win. The difference is we need his scoring to come with the same approach as the the first 18-20 games of the season, when EVERYONE was getting involved. Look at their wins and you see a different trend. Sure Kyrie wasn’t averaging 30, but they were beating good teams with a balanced approach. I would much rather have Kyrie live in the 22-24 point range like he was then and see other guys get involved because what’s happening now is what happened last year when this team struggled which was everyone just stood around and watched Isaiah.

– Terry Rozier is fighting it right now. Just 1-12 over his last two games, the Celts are reaaaaaaaally missing his bench scoring production. I’m not saying he has to be crazy and average like 15 a game off the bench, but they need SOMETHING from him.

You hope it’s just a funk, but his 36/35% splits are a little underwhelming to say the least.

– Let me know if you think this is good. The Celtics lost the rebounding battle 38-26 while giving up 11 OREB. They also lost the points in the paint battle 40-24, the second chance battle 18-5, and the fast break points battle 9-4.

– We lived in a world where at one point Abdel Nader had more FGA than Jayson Tatum. Just let that sink in.

– Here we were again, in a late game situation where the Celtics needed a three and what did they do? They called a time out and then Kyrie dribbled for forever and took a contested isolation three. How many more times do we have to see this before they realize that Kyrie can take the same three, just run him off a screen so he can catch and shoot. Those threes against IND? That late three against MIA? Off ball. I get Kyrie is a great isolation player, but this is starting to get annoying as fuck.

– The defense in that fourth quarter was a bit problematic. 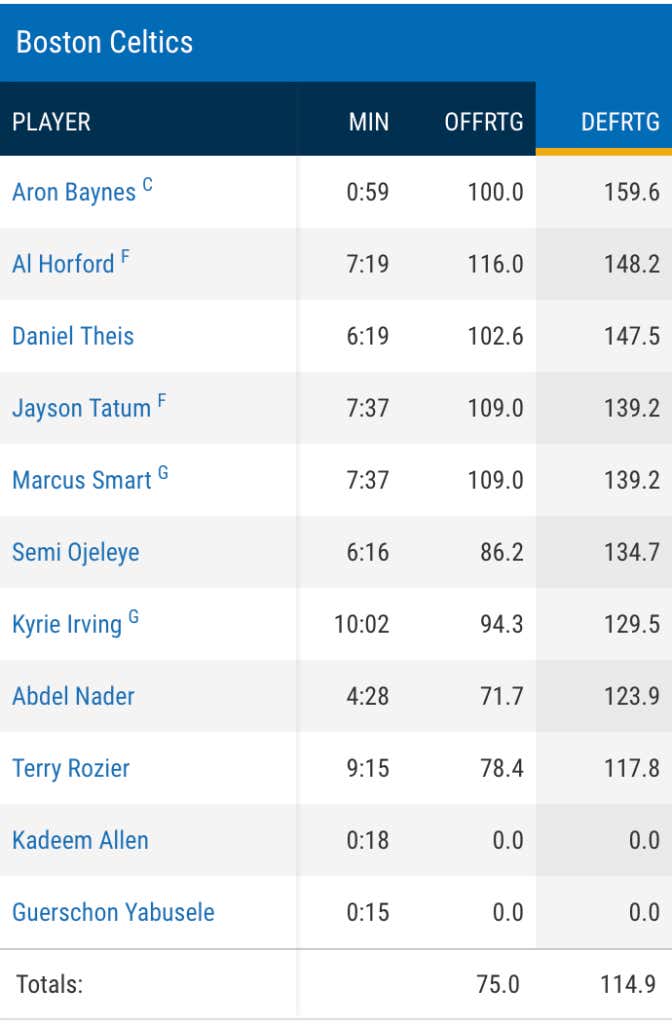 as good as Horford was on Porzingis, that’s how bad he was on Beasley late. Then Smart tried to switch on him, but that didn’t matter either. Tied at 75 with 8 minutes to go, Beasley took over and scored 16 points down the stretch and honestly it was impressive. He couldn’t miss. The problem was the Celtics didn’t turn him into a jump shooter. They let him put it on the floor and get momentum before getting to his sweet spot. Why not just back off because you know since he felt he was in the zone he probably would have taken that 20 footer.

– Total bench scoring: NY had 56, BOS had 20. I don’t know how Ainge can’t add a scorer to this group with that DPE. I get wanting to be patient and I agree wait until the buyout market happens, but that is the priority #1 for me, whoever that guy ends up being.

Good news is it’s not like the red hot Bulls are up next, a team that just beat the Celtics (granted Kyrie didn’t play). With TOR coming back against PHI, and CLE holding off CHI, the Celtics are very close to finding themselves behind both of these teams if they don’t get their fucking shit together. Get back to the energy that had legit defense, and move the goddamn ball on offense and get back to playing the style of basketball everyone knows they are capable of playing. Right now they’re in a rut, and it sucks, but it’s by no means permanent. It just happens to be the most frustrating thing on the planet, that’s all.

Now turn the page and say it with me 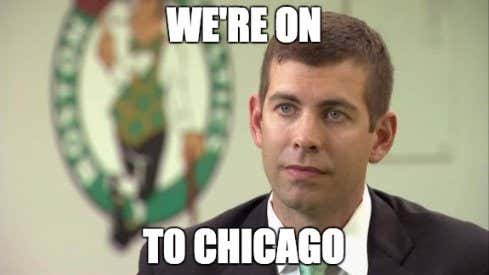