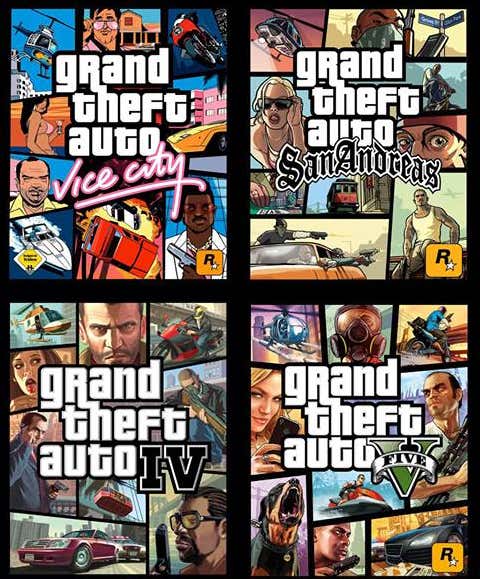 Pick which game you would eliminate

In honor of the good people at Rockstar inviting myself, Smitty, Devlin, Coley, Donnie, and Chuck over to their HQ yesterday to play some the new Doomsday Heist version of Grand Theft Auto V, I figured today would be the perfect time to put up a Grand Theft Auto Eliminator. While I know the 3rd game is what changed the industry forever, I am going with the four above.

You have Vice City, with the incredible 80s soundtrack and a chance to climb the ladder of success Tony Montana style. San Andreas with its G-Funk vibe. Grand Theft Auto making its return to Liberty City in GTA IV. And the three person story as well as the sprawling West Coast in GTA V. For the sake of fairness, we will disqualify the online mode in V since Rockstar is still somehow churning out new online content for a game that came out in 2013. And in case you need a refresher of what each game was like, here is a funny/ridiculous video for each game from a guy I stumbled upon while writing this blog.

Just hearing the music when driving those vehicles takes me RIGHT BACK to where I was in life when playing those games. Especially Vice City’s soundtrack. Holy moly. GTA is the motherfucking GOAT, man.

Anyway, vote for which game you would eliminate out of the four:

And if you want to watch a bunch of idiots from Barstool play the latest and greatest the GTA has to offer live from the Rockstar headquarters, check out our stream from yesterday below. Lots of fun and we hope to do a lot more streaming over there whenever they will have us. ESPECIALLY with Red Dead Redemption 2 coming out in a few months.