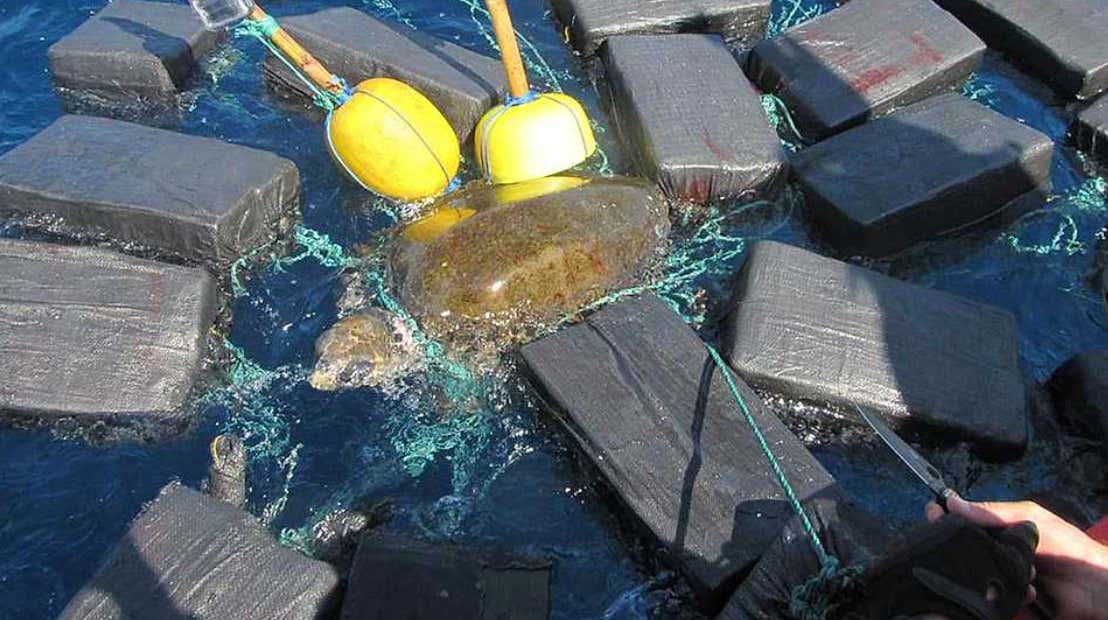 Fox News- A sea turtle was rescued after a boat crew found it entangled in bales of cocaine worth $53 million, the U.S. Coast Guard said. The crew of the cutter Thetis encountered the loggerhead turtle in the eastern Pacific during a 68-day mission, the Coast Guard said on Tuesday. “Coast Guard Ens. Mark Krebs, the pursuit mission commander, said that as his team arrived on scene with the jettison field, they immediately noticed the entangled sea turtle,” the Coast Guard said in a statement. “They saw significant chaffing from the lines on his neck and flippers.” The boat crew worked to free the sea turtle and seized 1,800 pounds of cocaine — worth $53 million.

I’m woke on this one. That turtle was in on it. You heard me. That turtle was moving more white girl than Young Jeezy*. Pretty convenient that he just so happened to be there with the cocaine. Stuck in the nets? Yeah I fucking bet. Did the coast guard even question his involvement? I guarantee they didn’t. They just let him go cause he’s a turtle and no one ever questions a turtle. Which is why it’s the perfect plan. You know what the best hiding place is? Plain sight. Just ask Keyser Soze. That turtle is now free and clear to continue dealing large quantities of cocaine. They had the big player in their grips and they let him go. Sad.

*Young Jeezy has been on my mind a lot lately. I’m not sure why but I’ve been listening to his music non-stop. I love Jeezy cause he has been rapping about the same thing for 10+ and I still love it. He’s been rapping about cocaine for a solid decade and a half now. You can listen to track #1 on Thug Motivation 101 (one of my favorite albums of all time) and that’s the entirety of his career right there. He talks about scales, bricks, birds, white girls, pies and snow over heavy bass. That’s every Jeezy song. That’s every Jeezy album. Again, this isn’t a knock at all. There is no better I Need To Put My Head Down And Get Shit Done music than Jeezy. He’s such a hard worker he works hard with the hard work. He went from old school Chevys to drop top Porsches doing his thing. I just needed to point it out. I appreciate you, Jeezy.