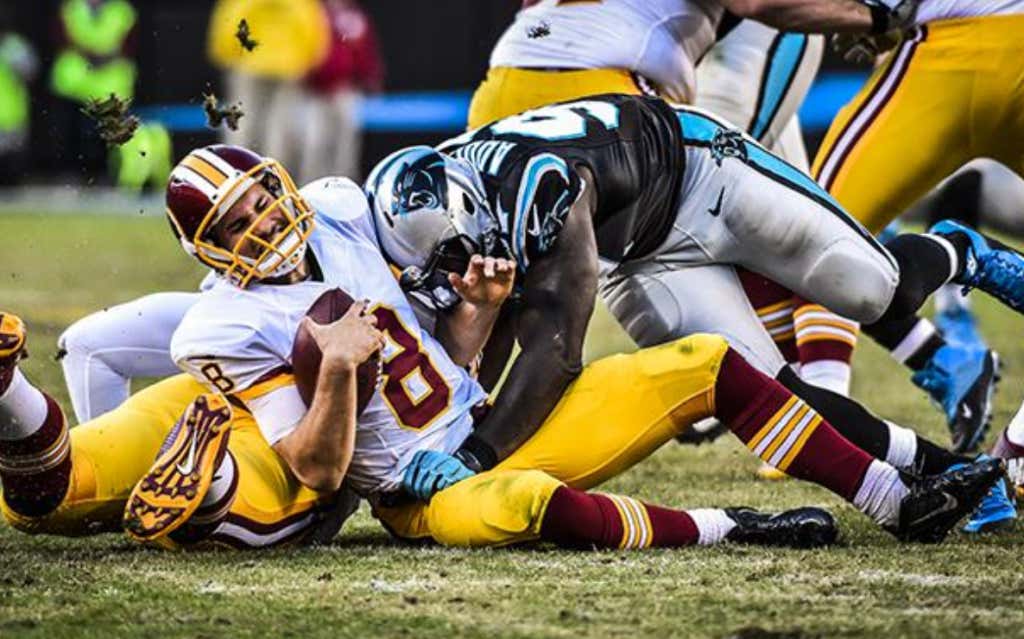 Washington Post - Redskins quarterback Kirk Cousins said he felt like he “dodged a bullet” after taking a shot to the back from Cardinals linebacker Chandler Jones in the fourth quarter of Sunday’s win. Trainers checked on Cousins on the sideline, but he was back on the field for the Redskins’ next offensive series and reported “feeling fine” the following day.

Danny Rouhier asked Cousins, who is playing on a one-year contract under the terms of the franchise tag for a second consecutive season, if he ever thinks about the fact that an injury could ruin his chances of signing a long-term deal this offseason.

“I definitely think about injury and the risk, and every one of us takes a huge risk every time we step out there, but I’ve always made the decision to get that insurance policy and protect myself, so that if anything did happen, I basically can be compensated as if I was still playing,” Cousins said. “That was actually a tip I got from Max Scherzer, because I reached out to him. He was in a similar position in his career, and he said the minute I made that decision to get that insurance policy, once I could step across the white lines, all I had to focus on was winning. And that’s the position I’m in: I can go out there and just focus on winning football games because of what the insurance policy does for you.”

Shit like this fascinates me. I never really thought about how the back-to-back 1 year deals could effect Kirk Cousins’ psyche on the field. It was much easier to look at the outrageous amounts of money he was making and be like “holy shit the Redskins are paying him so much by franchising him every year”, without thinking about his side of it. The Skins inability to lock him up long term meant he was a big hit, or since he plays on the worst field in the NFL, one more time his cleat got stuck in the turf at FedEx Field away from losing out on one of those massive NFL QB contracts.

So what did he do? He reached out to back to back Cy Young winning pitcher, his pal Max Scherzer, for advice. Scherzer was facing a similar situation heading into his free agent season, when he knew if he fucked up his arm, he wasn’t going to get the big, massive contract:

After turning down a six-year, $144 million offer from the Detroit Tigers before the 2014 season, Scherzer, at the advice of his agent, Scott Boras, took out an insurance policy for $750,000. If Scherzer was injured before becoming a free agent after the 2014 season and didn’t receive an offer better than the one he turned down, he would receive a tax-free $40 million payout.

“It’s not cheap insurance, but it’s well worth it in the sense that you can’t put a price on peace of mind,” Cousins said. “Certain situations in your career, maybe not every year, but certain situations, it makes sense. I did the research this past offseason, and the last two offseasons.”

And what’s sick is Kirk could very well be franchised AGAIN, for the 3rd straight year, and have to do this shit all over again. But if that does happen, that would mean he’s collected $70+ million dollars, all guaranteed, over the last 3 seasons, so at that point he’ll just be playing with house money. Must be nice to play for the most inept franchise on Earth!