Yeah that was nice to see and emotional and yada yada yada. But I can’t the only one who expected Isiah Thomas to stab Magic Johnson in the heart once they hugged like he was Little Finger, right? Based on everything I have seen from Isiah Thomas over the years, I don’t trust him and that 10,000 watt smile as far as he can throw me. And that’s before I factor in the fact that he has been one of James Dolan’s acolytes for more than the last decade.

And speaking of Magic, what kind of fucked up things do you have to do or say to make him hate you? That guy is legitimately the nicest dude on the planet. He kept the Twitter exclamation point factory in business through some hard times back when he was tweeting regularly. I feel like if you meet Magic Johnson, you get two things. A hug and a smile. Every. Single. Time. No. Matter. What. I instinctively get happy whenever Magic is on my TV screen. I can’t imagine how delightful he is in real life. Yeah I get that some things were said/done during two NBA Finals against each others plus Isiah reportedly spreading rumors about Magic being gay or bisexual is fucked up. But those guys went from kissing on the cheek before going to war on the hardwood (people forget that) to their friendship becoming a Cold War. 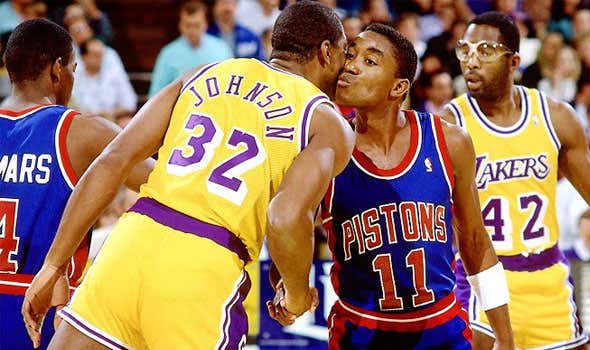 I feel like Magic can brush off almost anything. Like if you kicked him in the dick and told him that his dog was ugly, he would laugh at your spunk and tell you a story about how him and Cookie bought that dog. Shit, Magic is even the one apologizing in this video. I’m onto you Zeke. If you break Magic’s heart again, you will have to answer to me.