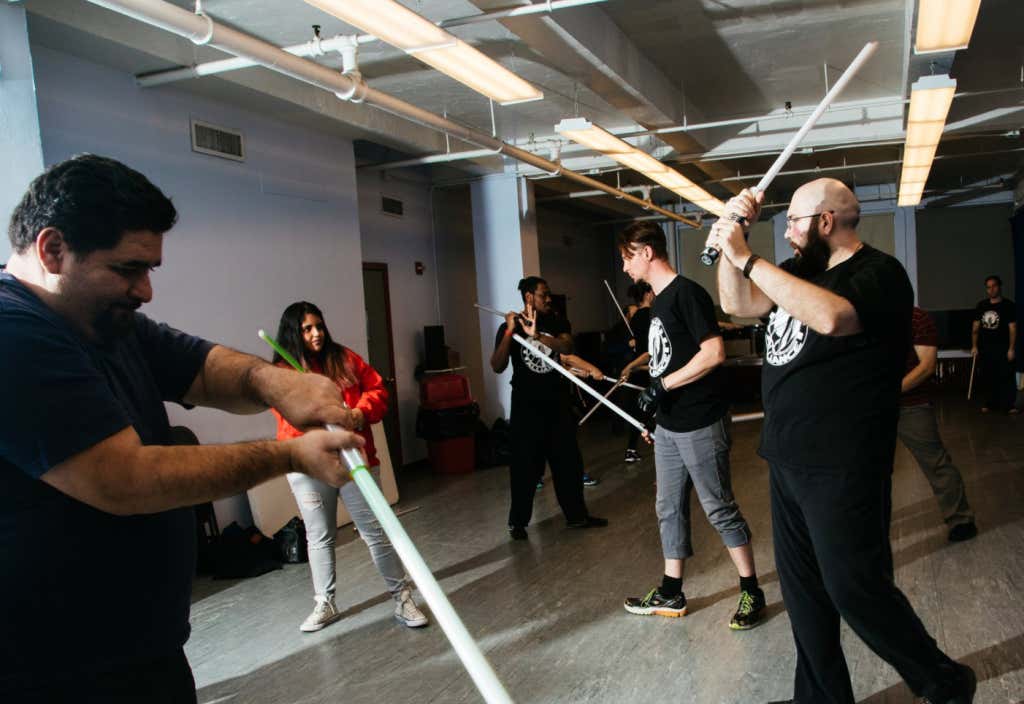 My good pal John Feitelberg texted me a link to an article titled “The Force Is Strong With Them” last night, I clicked on it, and read the following…

NYTimes- In a rental space on West 36th Street, 18 people in two lines stretched, did shoulder rotations, lunges, neck rolls and ran in place. Most wore sneakers and workout gear, along with black T-shirts with “Rogue Alliance” printed on them in white.

It looked like any other exercise class. Except for the lightsabers.

…and I was all in. Didn’t have to read anything more. I did anyway, because I was curious, but just know, I was in right there.

For the next hour, participants discussed and practiced several different forms of sword fighting, always incorporating their lightsabers. First there was fencing. Then German longsword, followed by stage choreography. Last was Shii-Cho, one of seven saber forms of fighting that appear in “Star Wars.” The click of light sticks reverberated throughout the room.

“The wall side is attacking, mirror side is on the defense,” said Brandon Hughes, 36, a legal assistant, who was the instructor that night. “Let’s practice doing the shape of an A with the sabers. Hip, hip, head. Hip, hip head.”

The tone remained lighthearted but serious as tips and tricks were shared. Veterans, using “Star Wars” lingo, helped newbies understand specific moves. Lightsabers — which in this universe are usually polycarbonate tubes illuminated from a lighting device in the handle — beamed yellow, red, pink, light blue and green. Some were basic, others more ornate. One member created his handle using parts from a vacuum and from the Custom Saber Shop, an online tutorial and saber blade supplier.

This sounds absolutely amazing. Strap in for a super nerdy sentence coming up, but the behind-the-scenes special features on the first DVD release of ‘Episode III: Revenge Of The Sith’ made me want to be a filmmaker when I grew up. You could argue that I went down a different path, but I’d argue I haven’t grown up yet, and still have filmmaking in the long-term pipeline. The extras on that DVD fascinated me so much partly because they showed how much effort went into the final lightsaber duel between Anakin Skywalker and Obi-Wan Kenobi. It was weeks on end of tiring rehearsals, where both actors were completely exerting themselves to make the fight look as brutal, passionate, and realistic as possible. It reminded me of pro wrestling, actually. It’s two people working together to make an audience believe they’re working against each other.

I can promise you that I’ll be enrolling in classes next year, hopefully with Clembacca as my dance partner. We’ll see if The Last Jedi ruined lightsabers for him or not.