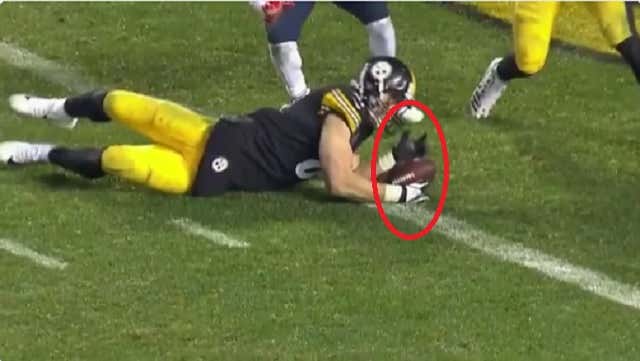 Pittsburgh Post-Gazette – Contrary to popular belief throughout New England, the Patriots do have influence in the offices of the NFL.

His name is Alberto Riveron, and he is the NFL’s senior vice president of officiating.

Whether you agree (Patriots fans) with his call Sunday night robbing Jesse James of a touchdown or not (Steelers fans), Riveron has helped decide three victories for New England just this season.

This is not to accuse Riveron, in his first season on the job, of favoritism toward the Patriots, but here are the facts:

• New England’s Brandin Cooks caught a 25-yard touchdown pass with 23 seconds left to beat Houston 36-33 on Sept. 24. He caught the ball with both feet in the end zone but lost control as he hit the ground out of bounds. It was ruled a touchdown, and Riveron did not overturn it upon review. 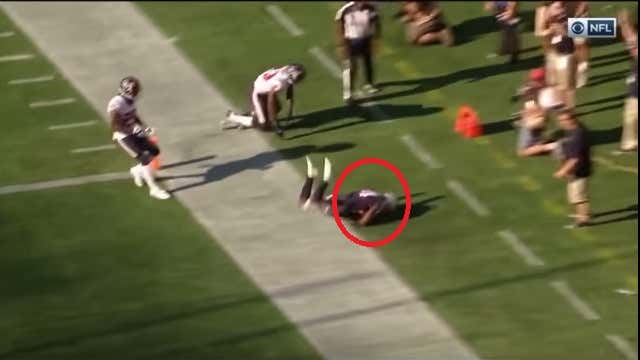 • New York Jets tight end Austin Seferian-Jenkins caught a 4-yard touchdown pass against the Patriots, and fumbled through the back of the end zone once he crossed the line. It was ruled a touchdown on the field. Riveron overturned it. The Patriots got the ball at the 20. New England went on to win 24-17 on Oct 15. 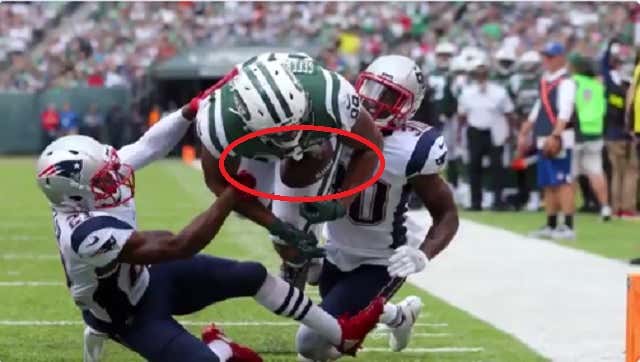 Hilarious. I’m not accusing Alberto Riveron of favoritism, but here are all the times he’s shown favoritism. I love it. God help me, how I do love it so.

Let’s see … what’s the conspiracy this time? The Patriots have a man on the inside, helping them with all these catch/non-catch calls? Yup. That’s it. They’ve been exposed. Once again, the NFL is showing favoritism towards them. It’s the only explanation. They’ve taken draft picks away, handed down fines, spent $10 million bucks on a witch hunt, took the best player in the game off the field for a month and have an entirely different set of rules for defending Rob Gronkowski than any other receiver in football. But this Alberto Riveron is in charge of actually conspiring to help them win. Roger that.

I’m being totally honest when I say I love this stuff. It nourishes me. It keeps all the success from getting boring. Stops Patriots fans from ever getting complacent. It prevents our Yankeefanification. Because the rest of the world can’t ever come to grips with the real reasons for all that winning. They’re so caught up with chasing ghosts like bugged offices, air pump needles, spy cameras, helmet radio jammers and warm Gatorade, they miss the answers that are right in front of their faces.

The purposes of this post I timed how long it took between James’ catch and the reversal to a non-catch. It was 3 minutes and 22 seconds. During which time the Steelers’ coaches and players stood around with their thumbs up their asses waiting for the play to be upheld instead of huddling up to decide what to do it if got overturned. So when it did, they descended into chaos. A short in bounds pass kept the clock running. Todd Haley screamed for Roethlisberger to spike it. Instead he freelanced, going for the end zone while at least three of his receivers never left the line of scrimmage.

Compare how Pittsburgh handled the end of the game to how the Pats did. Eric Rowe and the Pats secondary looked for the fake spike/pass like they’ve been taught to do. Interception. Ballgame. A few minutes earlier, when Gronkowski caught the 2-pointer to give them a field goal lead and started celebrating, Brady ran into the end zone to tell him “It’s not over.”

That’s your reason the Patriots are the No. 1 seed at the moment. Because they’re simply better prepared. Mike Lombardi Tweeted out that they are coached never to reach out for the end zone the way James did. And that anyone who does will be benched. Pats safeties know not to let the Brandon Cooks’ of the world behind them in the end zone with the game on the line. Malcolm Butler was trained to rip the ball out of Seferian-Jenkins’ arms. But sure, Pittsburgh. You keep convincing yourself that this Riveron guy is a double agent they have secretly planted. And we’ll keep just focusing on the fact that if the Pats win out, they won’t have to go on the road from now until January 27th when they’d be heading to Minnesota.