The craziest part of this video is that he’s actually having fun. Getting in a helicopter, strapping on a GoPro, and falling down a mountain is fun for him. He was one wrong step away from death and he was giggling like a psychopath. Didn’t even have his skis on, just the boots. Which to this day are the worst designed piece of footwear of all time: zero give, zero grip, absolutely hideous. They’re like cement blocks but less comfortable. Not to mention they’re IMPOSSIBLE to walk in. Oscar Pistorius has a smoother gait.

At any rate, everything from the initial dismount, to the pre-avalanche snow shift, to the jagged rocks was terrifying. I went off a table-top at Okemo one winter and nearly shit my pants. The second I felt the tiniest bit out of control I panicked, complete yard sale. Poles everywhere, lost control of my legs, started screaming. It was a disaster. I can’t imagine trying to maintain control on a mountain like that. I like to go nice and slow like the first level of SkiFree. 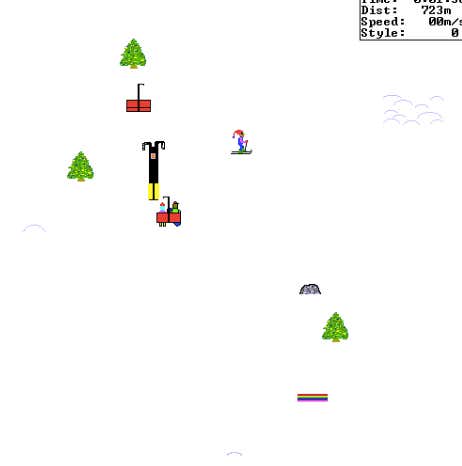 Even if he was going slow it still would have been great. There’s no such thing as a bad ski video. Not only that, ski culture is one of the must unintentionally hilarious things out there. Youtube “funny ski bros” and you’ll see what I’m talking about. Their entire identity is based around the fact that they like to ride down mountains and be “chill.” It’s a heady existence. Not that there’s anything wrong with that. I want this guy to keep putting out videos but chances are his days are numbered. You can only ski down a cliff so many times before life catches up to you.